Black Lives Matter in Israel, too

Our attitude towards Ethiopian Israelis is a reflection of a social disease that exists in our society. 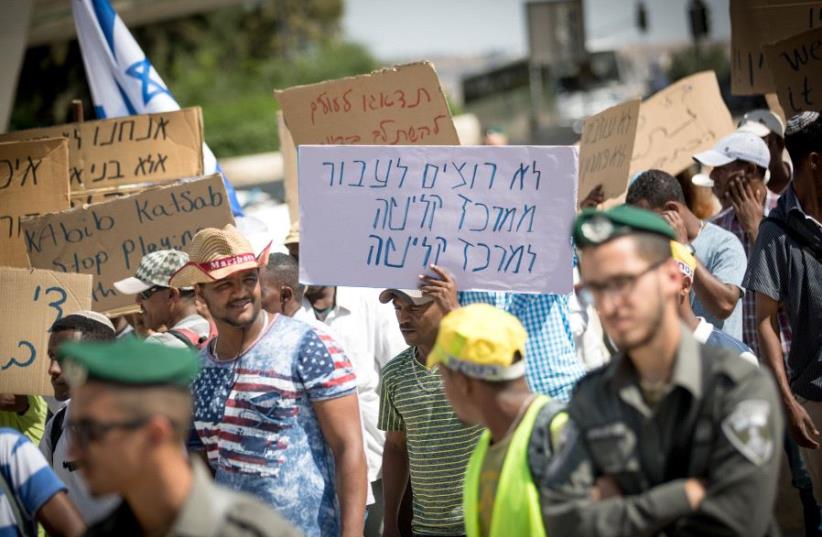 Ethiopian immigrants protest in the Israeli capital against the looming evacuation of their absorption center in the Jerusalem suburb of Mevasseret Zion, July 10, 2017.
(photo credit: MARC ISRAEL SELLEM/THE JERUSALEM POST)
Advertisement
Imagine that you were born in Israel to parents of Ethiopian origin.You grew up, finished high school and then began looking into applying to university. There, you will discover that because you are of Ethiopian origin, the Absorption Ministry is responsible for you, and not the Council for Higher Education, which caters to all the rest of the students. But what could possibly be your connection with the Absorption Ministry if you were born here in Israel? Why does the government insist on placing Israeli students whose families emigrated from Ethiopia in a separate box? This question was asked by Jeju Bimro when he was studying at the Hebrew University in Jerusalem. He and his friends decided to engage in a struggle and make a clear statement: Separate is not equal. Since engaging in this difficult battle, their campaign has achieved results, and they’ve noticed a change in attitude. Bimro is currently a member of the Council for Higher Education steering committee, and is working to promote equality for students from the Ethiopian community.Last week, Bimro and other activists from the Ethiopian community were given the opportunity to tell their stories publicly at the Knesset.They were invited to sit in on committees and then speak at the central plenum session, which was holding a special assembly on the subject of the struggle for equality for Ethiopian immigrants in Israel. The plenum and the committee hearings were initiated and organized by the Association of Ethiopian Jews, which is putting effort and time to bring the voices of Ethiopians into the Knesset.I initiated this annual day of Knesset activity three years ago, following the huge protest by young Ethiopian Israelis who took to the streets on May 3, 2015, in a number of cities across the country. They organized a mass protest against the assault by Israeli police officers of a young IDF soldier of Ethiopian descent named Damas Pakada. In effect, the protest was organized in light of this incident, but was also aimed at altering Israelis’ view of their Ethiopian fellow citizens.The massive demonstration carried a strong message and brought with it a lot of optimism. Many people went out into the street where they could feel their power. Unfortunately, the protest ended in a rather unpleasant fashion, with violent incidents and police firing tear gas on young and old demonstrators alike. The images I saw were unlike anything I’d ever seen before at Rabin Square in Tel Aviv.An important message, however, was sent that night. Young people had stood up and made their voices heard. They weren’t willing to sit by on the sidelines and watch anymore. They wanted to make a change in our society, that would help the Ethiopian community in particular, but that would also bring about a positive change for everyone. It was no coincidence that I chose that date as the official Knesset day for recognizing the struggle for equality for the Ethiopian community in Israel.AT THE RECENT Knesset session, we heard discussions about the difficult situation we’re in. We heard descriptions of problems and difficulties the Ethiopian community faces in education, housing, health, employment, government bureaucracy and treatment by police officers – a painful issue that has yet to be solved. The common denominator in all of these problems is racism. This harsh word was used time and again during the discussions to describe the problems facing the Ethiopian community.Racism is a terrible disease. It initially attacks the victim, but in the end comes back to strike the aggressor as well. Racism can destroy a society. Israelis of Ethiopian origin are still dealing with this phenomenon on a daily basis. Our attitude towards Ethiopian Israelis is a reflection of a social disease that exists in our society, which can be seen not only in the way we treat the Ethiopian community, but also how we treat Arabs and other minorities living in Israel.Efforts have been made to address this issue, such as the commendable inter-ministerial work being led by Emi Palmor, Director General of the Justice Ministry. Her team has accomplished serious and courageous work, and I call upon the government to implement its findings.As I mentioned above, Jeju Bimro has had a number of successes in this struggle. Last week, we also heard from a number of other activists who are still yearning for justice. There was Benzi Salamasa, the sister of Yosef Salamasa, who was violently arrested by police officers in 2014, dying shortly after. “He wasn’t the first victim, and he will not be the last one either,” Salamasa said.“It turns out that in Israel, black lives don’t matter as much as white lives do,” he added. “Should I be teaching my kids to be careful so they don’t get murdered by a policeman?” Following the intense discussions that were held among the various committees, we held a plenum session in the Knesset that was actually optimistic. During the conference, a number of inspiring stories were told by young people who have actively organized their communities, come up with solutions and fought to raise public awareness.The message that kept repeating itself in all of the anecdotes that were told at the conference was that Israelis of Ethiopian descent can stand on their own two feet and proudly contribute to Israeli society. These optimistic activists stressed that if there were problems, they have what it takes to deal with them, and that they want to make the country a better place for everyone. It’s important that their message ring out strongly throughout the Knesset and the entire country.The writer is a member of Knesset with the Joint List Party.Translated by Hannah Hochner.