Blood money and the corruption of American foreign policy 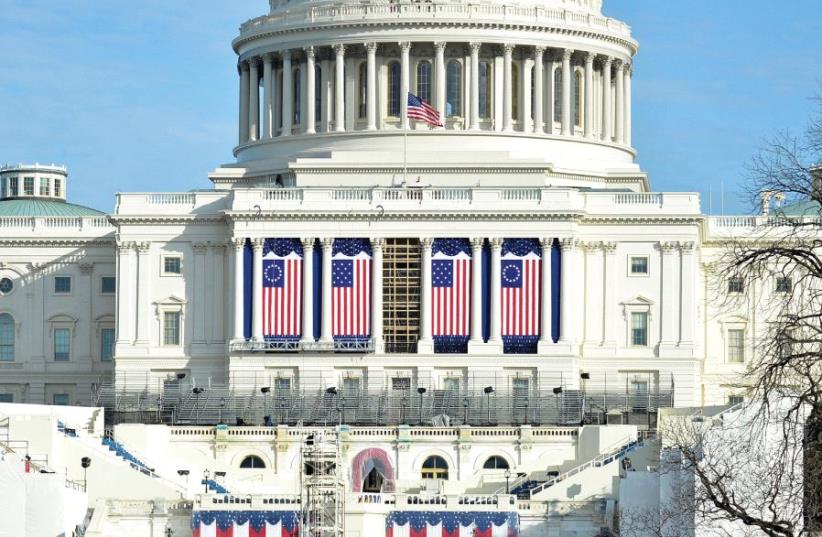 PREPARATIONS ARE FINALIZED on the West Front of the US Capitol, where Donald J. Trump will be sworn in as America's 45th president on Friday
(photo credit: REUTERS)
Advertisement
Foreign influence in the United States is a major problem, but it might surprise you to find out just who some of the biggest players are. You would certainly think of Russia given the massive coverage of their attempts to influence the 2016 US election. But one name you probably haven’t heard is Qatar, a small country in the Middle East which wields an outsized influence through a large and well-funded operation.The characterization of Russia as a puppet master in US politics is, of course, utterly ludicrous to anyone familiar enough with the poorly funded, amateurish, and ham-fisted operations of Russia and her allies to influence US opinion in the 2016 cycle. This is not to say that foreign influence can’t be effective or that foreign nations and their lobbyists are not corrupting the policy-making process – they clearly are. A compelling case regarding this malicious influence is made in a new documentary called Blood Money, previewed at last month’s CPAC conference and set for release this week.To illustrate the phenomenon of Washington, as a “playground for foreign interests,” the documentary tells the story of the Qatar lobby, and how they have effectively changed the conversation with regard to Middle East policy in establishment circles during the current administration. Under the Obama administration, the US threw its weight behind the Arab Spring movement on the theory that our support for democratization would lead to both greater stability and more pro-American outcomes. It was a bad bet. The overthrow of authoritarian regimes in Egypt, Tunisia and Libya simply empowered radical forces like the Muslim Brotherhood, at once undermining stability in the region and leading to an increase in support for terror activities worldwide.In May 2017, US President Donald Trump announced a course reversal, laying down the gauntlet to Arab leaders in a speech in Riyadh, Saudi Arabia, by insisting that they “drive out” and marginalize the pro-terror, Islamist factions that too many had been coddling. Many of the leaders present, including Saudi Crown Prince Mohammed Bin Salman, reacted by cracking down on the radicals within their borders, including clerics preaching pro-jihadi hate as well as billionaires funding terrorism and the spread of radical Islamist propaganda. One glaring exception in this trend was Qatar, whose regime continued funding and providing safe haven to terrorist groups like ISIS, al-Qaeda, Hamas and others.Trump’s Riyadh speech led to concerted pressure on the Qatari regime from other Arab leaders to cease their patronage of the Muslim Brotherhood and associated radical forces. Instead of changing course, Qatar went on a propaganda “charm offensive,” spending more than $16 million in 2017 alone on lobbying activities while pouring countless millions into media buys, Twitter targeting and sponsoring pay-to-play “journalism.”Even more disturbingly, Qatari strings-attached “donations” to prestigious American think tanks like the Brookings Institution effectively bought the production of pro-Qatar policy papers and agreements not to criticize the regime. The regime has given at least $24 million to Brookings, and further “donations” to Brookings’ Doha branch in Qatar are not subject to US reporting laws. In a leaked cable last year, one Qatari official wrote that “Brookings is worth more than an aircraft carrier to us,” a stunning acknowledgment of the return on investment that Qatar is receiving from the vast sums they are spending on lobbying and propaganda efforts.Crucially important to those efforts has been the winning over of key Republicans in Washington to the model of a political resolution with radical Islam to resolve differences, as opposed to the Trump’s Riyadh speech model of “driving out” the forces of radical terrorism. To that end, credentialed conservatives such as Republican insider Nick Muzin have been enlisted to lobby on behalf of the Qatari government in return for fat paychecks from Doha.The “charm offensive” over the last several years has gone a long way toward achieving its objective. The administration has shifted from its initial posture of pressuring Muslim leaders to “drive out” the radicals to one of “working together” to achieve a political solution – barely distinguishable from pro-Arab Spring rhetoric of the previous administration. The sheikhs and emirs in Doha and around the region who have been funding terror are now breathing a sigh of relief. And the US media has shown a strange reticence to aggressively investigate either the Qatari regime’s continuing support for Islamic radicalism or the robust propaganda effort to cover their tracks. Barely mentioned in mainstream media accounts of the murder of Jamal Khashoggi was the fact that this “journalist” was one of many receiving funds from the Qataris.Buying influence wasn’t the only way Qatar worked to further its agenda and stop attempts to rein in its malign activities. They also conducted a hacking campaign against many influential individuals and government officials worldwide. This also included US citizens as well as current and former members of US government and think tanks. They used emails and other information they illegally gathered to publicly and privately pressure these people.So the next time you read an account of Russian efforts to buy influence and undermine our democratic process (a failed project, given the anti-Russian hysteria that now prevails among our political and opinion-making elite), remember that the really effective foreign influence peddlers like China and Qatar are probably acting mostly under the radar. After all, that’s one of the primary measures of their effectiveness.The writer is the president of the Security Studies Group.