It is beyond hypocrisy for the UK to complain about the abuse of its legal system at home, while funding the very same campaign against Israel. 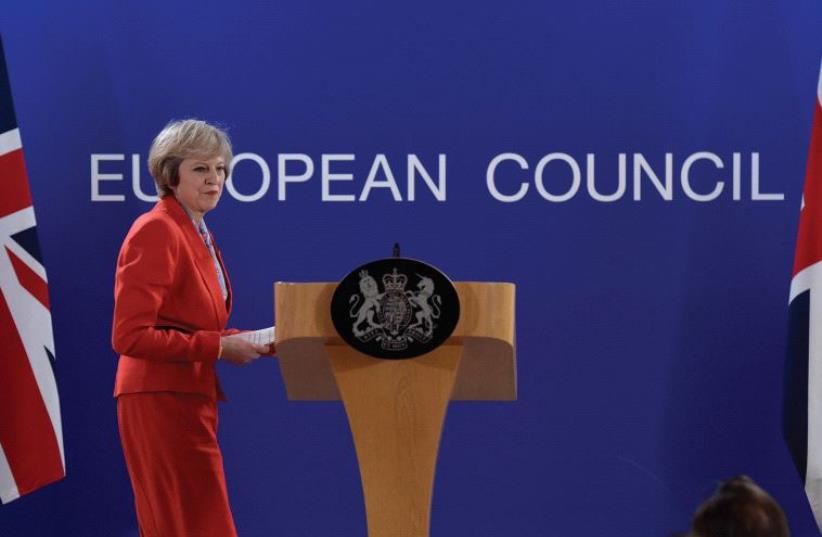 UK PRIME MINISTER Theresa May holds a news conference after the EU summit in Brussels on October 21.
(photo credit: REUTERS)
Advertisement
On October 4, British Prime Minister Theresa May announced that, during times of armed conflict, the UK would suspend application of the European Convention on Human Rights.The move was prompted by what May described as an “industry of vexatious claims” against British soldiers for alleged misconduct during wars in Afghanistan and Iraq. Defense Secretary Michael Fallon added that the UK’s “legal system has been abused to level false charges against our troops on an industrial scale.”The “industry” in question consists of non-governmental organizations (NGOs) and lawyers that zealously seek to prosecute British troops, while largely ignoring the terrorist organizations and their financial and material backers to which the military is responding.There are currently more than 2,000 “lawfare” cases pending in the UK, and hundreds of complaints were referred to the International Criminal Court.Reportedly, the British government has already spent more than $120 million on such matters.It is not surprising that the British government took such a decisive step to protect its soldiers. Radical activists have long favored the use of courts to constrain counter-terror operations, micro-manage military decision making, and harass military and political officials from Western countries. For some utopians, this is seen as a means of banning warfare altogether.And, as noted, the scale of the litigation in the UK has reached overwhelming proportions.Ironically, for more than a decade, the UK has served as a primary location for similar campaigns targeting Israelis, and the British government has actively supported these NGOs with tens of millions of pounds to implement their agenda.Palestinian political NGOs such as the Palestinian Center for Human Rights (PCHR), Al Haq and Al Mezan, and their British attorneys badger Israeli officials traveling to the UK by seeking arrest warrants for bogus war crimes charges. While these efforts are largely designed for propaganda impact and none has advanced in the courts, many high level meetings and diplomatic engagements in the UK have been disrupted as a result. For instance, in July, former foreign minister Tzipi Livni was served a police summons for suspicion of involvement in “war crimes” in Gaza due to anti-Israel activists, leading to tensions between Israel and the UK. Of course, the same fringe activists eagerly targeting Israelis have never lined up at the magistrate’s door to obtain warrants when Palestinian officials or other terrorism-linked individuals come to London.Many of these organizations have enjoyed British government largesse, either directly or via the European Union. Between 2005 and 2009, PCHR, in partnership with OxfamNOVIB (based in the Netherlands), received nearly $330,000 from the EU ostensibly to campaign against the death penalty. PCHR used this funding for legal strategy sessions for contemporary and future universal jurisdiction cases singling out Israeli officials involved in military operations against Hamas. British courts were just one of the venues where PCHR routinely sought arrest warrants against Israeli officials.The UK is also the primary financial backer of “vexatious claims” on an “industrial scale” in Israel itself.Since 2011, Britain has funneled a staggering $20 million in taxpayer funds to the Norwegian Refugee Council (NRC) and local NGOs, which in turn have flooded Israeli courts and administrative bodies with lawsuits.The scope of NRC’s interference in the Israeli legal system, thanks in part to the UK government, is unprecedented.With its government financing from the UK, EU and Norway, the NRC has funded more than 4,000 cases in Israel, according to official documentation.These cases have included some of the most controversial and contentious issues relating to the Arab-Israeli conflict. Epitomizing this abuse, in a public presentation an NRC-affiliated lawyer commented that the strategy behind the UK-funded project is to undertake “every possible legal measure to disrupt the Israeli judicial system... to increase the workload of the courts and the Supreme Court to such an extent that there will be a blockage.”It is beyond hypocrisy for the UK to complain about the abuse of its legal system at home, while funding the very same campaign against Israel. The UK has now had a taste of its own lawfare medicine and is reacting accordingly.

Will its leaders now realize the immorality and absurdity of wholesale funding for lawfare attacks that target Israelis seeking to protect citizens from terrorism? The author is the legal adviser of NGO Monitor, a Jerusalem-based research organization and the author of NGO ‘Lawfare’: Exploitation of Courts in the Arab Israeli Conflict.
Advertisement
Subscribe for our daily newsletter