June 23 was a day for the defense and it took its last chance to set the historical record Cambodians choose for their future. 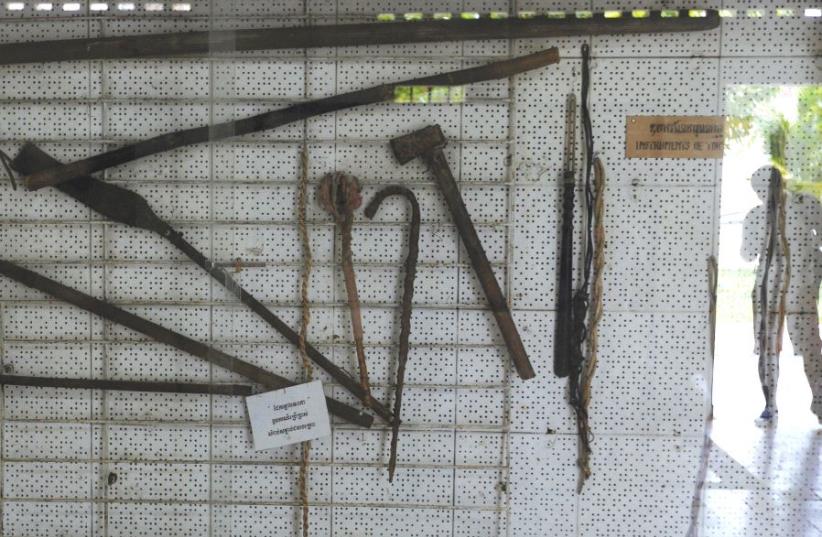 A VISITOR is reflected in a showcase with torture instruments at Tuol Sleng Genocide Museum in Phnom Penh, Cambodia
(photo credit: REUTERS)
Advertisement
The public record on one of the greatest atrocities of the twentieth century, the Cambodian genocide of 1975-1979, came to an official close on June 23. In a dusty suburb an hour outside the bustling center of Phnom Penh, the UN-sponsored war crimes tribunal heard final statements by Nuon Chea and Khieu Samphan – top leaders of the Khmer Rouge regime recognized as committing genocide against at least 1.5 million Cambodians. Whether the nine-yearold trials are deemed a success despite $300 million spent on only three convictions is for history to judge.June 23 was a day for the defense and it took its last chance to set the historical record Cambodians choose for their future. The day’s drama came as Samphan took the stand, probably the last-ever public address by a Khmer Rouge. Nuon Chea sat in a cell beneath the court as his lawyer did his talking.Predictably, the day was filled with the derision of a show trial, a victor’s justice with more theatrics than evidence. The 90-year old Nuon Chea, in fact, decided he didn’t want to speak for this very reason. As his lawyer put it, “Nuon Chea couldn’t care less if you convict him again for a life sentence. Rightfully so... he doesn’t take this institution seriously.”But the courtroom heard more justification than denial. The men see themselves as saviors of Cambodian independence. They bemoan how Vietnam has successfully propagated a myth of Cambodian self-genocide as a cover for its influence over their country’s government and resources.Explanation of Khmer Rouge policy began with a demand to appreciate the conditions of the time.Southeast Asia’s most backward nation was in existential crisis; it faced famine, devastating US bombing and the threat of invasion by the Khmer people’s ancient enemy, the Vietnamese. The forced collectivization in the countryside, central to genocide claims, was believed to be a matter of necessity. How else could the country begin to feed itself while under attack? Of course, labor on the farms and construction of dams and bridges was strenuous and deadly. But individual sacrifice, not any policy of death, was required to maintain independence in crisis. What is now called slavery, says Samphan, was a mass movement of self-sacrifice to rebuild a society mired in chaos and invasion. The Khmer Rouge tapped pre-industrial Cambodia’s only resource.“In order to rebuild and defend our country, the only force we had was the strength of our people.”The regime, continued Samphan, will someday be honored for resisting an “Indo-Communist Federation” imposed by Vietnam.The defense not only rejected responsibility for death from national sacrifice and multiple famines the regime claimed to be fighting. It said political chaos justified efforts to eliminate Vietnamese collaborators efforts the accused say were no different than US-supported killings of communist sympathizers in Suharto’s Indonesia or extrajudicial killings during the Obama administration of untried suspects in the Middle East.In fact, the defense emphasized the role of collaborators in increasing the Cambodian death toll. Speaking to casualty counts, it more generally argued the prosecution was severely lacking in evidence of mass killings. Reference was made to major discrepancies in official casualty lists and actual recovery of skulls and bones at the “killing fields.”“There are 5,000 pictures of prisoners and 6,000 skulls at Choeung Ek,” reports Nuon Chea’s lawyer.“Where’s the forensic evidence of the other alleged 11,000 or so?” This was not a day of contrition. Khieu Samphan’s only regret had nothing to do with the victims of the Khmer Rouge, but rather the successful subterfuge by Vietnam and the demise of leaders who stood up for Cambodian independence. He hopes that this, not a false genocide, is what history will remember. “To all those who perished by believing in a better ideal of a brighter future during the five-year war under the American bombardments and the conflict with the Vietnamese, their memory will never be honored by an international tribunal.”Actual sentencing could take months or years.