Can religion be an opportunity for human progress?

The real solution to willful and unconscious misunderstanding of religion will be a municipality. 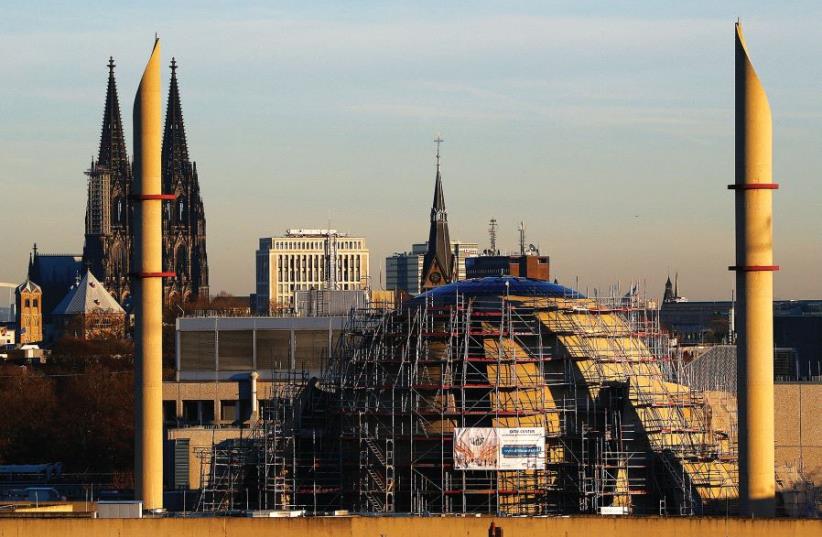 THE COLOGNE CATHEDRAL is seen next to the two minarets of the new Cologne Central Mosque.
(photo credit: REUTERS)
Advertisement
In our modern Western discourse institutional religion is often said to be an enemy of progress, keeping our societies stuck in archaic structures.Especially Islam is seen as an obstacle. In this view the current crises in countries like Syria or Iraq are the result of religion. The consequence of this interpretation is the requirement of developing a future society religion has no place in. It is impossible to even imagine religious institutions supporting peaceful human development.In fact a very high number of armed conflicts in history as well as in the present have been declared and justified because of religion. You can find lots of examples in Judaism, in Christianity and also in Islam. So, too, you can find several verses in the Torah, in the Christian New Testament and in the Koran which could be understood as requiring the faithful to fight against human beings of other faiths or even against those who practice the same religion in a different form.Real life, however, shows that non-religious societies are not more peaceful. The Nazis did not attempt to exterminate the Jews in the name of Christianity or Islam, but rather in the name of a secular ideology called “Vorsehung,” according to which the “Aryan race” was destined to rule over other peoples. Current Islamophobia as well as antisemitism in Western countries has the goal of excluding Muslims from society of course, but the most popular islamophobic activists are not religious people. They do not were a knight’s armor with crosses on their backs as in the crusades of the Middle Ages. Many of them, like the terrorist of Chapel Hill, South Carolina, in 2015 even call themselves “atheists,” but show cruelty just as heartless as that of the Islamic State (ISIS) fighters in Iraq or Syria. Their victims may be are religious individuals, but they are as unarmed, peaceful citizens, just as are the victims of Islamist suicide attacks in bustling shopping centers.If one reads the holy books of the three Abrahamic world religions one will also find a couple of verses especially requiring believers to throw away their arms and show mercy and empathy to all their fellow human beings. Knowing these backgrounds, that religions like these can serve as vehicle for war and inhumanity seems incomprehensible. If they are still used as instruments for suppressing and killing people the reason cannot lie in the religions themselves but in mankind. In human beings justifying violence to themselves as well as others as necessary for a greater goal, using religion as a convenient ideological framework. Religions promising reward in the hereafter are very suitable for this purpose, if there are any elements in them you can interpret as demanding this violence. That these elements are often filtered out of the context of a revelation text is only obvious to other believers who know this context on the whole and are not influenced by the same ideology.However, the fact that secular ideologies like communism, fascism or culturalism are used for totalitarianism, suppression and violence as often as religions can be seen an argument against the thesis that distance from the metaphysical would lead humankind to peaceful, progressive future.Moreover the ethics of human rights is founded in the religions, although it is defined as secular nowadays.The first ethical framework was given by the religions. Religions and the belief in a creator of the world and of mankind with body and soul is moreover a useful stimulus to follow this code of ethics.Religion builds a conscience in us, pushing us to ask ourselves how to pursue our interests without preventing the others from pursuing their own.Although there are several inhuman practices justified with religion, the belief in a god for whom all human beings are equally worthy is an important impulse for living peacefully together in a heterogeneous society. The most powerful opposition against inhumanity are religious people who understand their faith as requirement to serve the entire society and to treat members of other faiths with different worldviews as fellow humans, as fellow- believers.The real solution to willful and unconscious misunderstanding of religion will be a municipality, which by various means religion can develop to its full potential but which political authorities do not legitimate via any religion. In a society like this real conflicts cannot be justified by religion on the one hand, but religion can play a role in solving them on the other. In this case differences about holy places like Jerusalem can be solved politically, without the parties to the conflict feeling that their religion is under attack. As consequence different faiths can work together and respect each other as worthy as honorable, with their own rights and duties.

The author is second chairman of the Central Counsel of Muslims in Germany (ZMD).
Advertisement
Subscribe for our daily newsletter