Shutting down these stores, particularly those outside Western jurisdictions, may be difficult, but it’s well worth the effort. 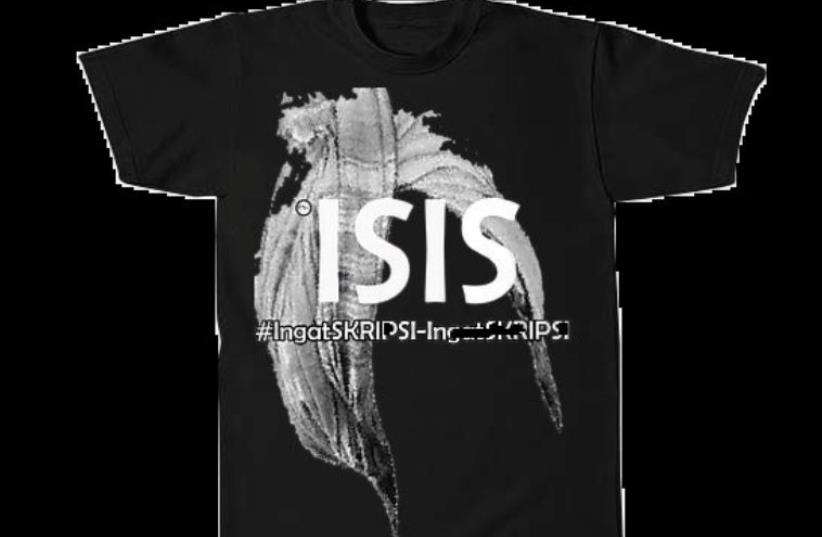 THIS ISIS-BRANDED t shirt, priced at 120,900 Indonesian rupiahs (NIS 34), is one of numerous Islamic State-related products available from Indonesian and other webstores.
(photo credit: TEES.CO.ID)
Advertisement
Islamic State has cemented its reputation around the world as a radical, brutal terrorist group that kills indiscriminately, enslaves women and destroys culture, all in the name of religious purity. The group seems to be in a class by itself in concocting new and creative ways to film people being burned alive, drowned, or group-slaughtered.Beyond all that however, could Islamic State (ISIS) also set the latest fashion trend? Some clothing entrepreneurs around the world certainly hope so. And they are betting they can make a killing (oops, sorry) hawking the uniform of this year’s premier embodiment of hate and intolerance.These entrepreneurs have begun selling T-shirts, hoodies and other apparel emblazoned with the ISIS logo. In early August, Spanish police arrested a man selling homemade IS-themed clothing from his home. The merchandise, which featured the ISIS flag and images of an execution, included T-shirts, baby clothes and women’s tank tops – that last item, ironically, would probably get a woman stoned to death if worn openly in ISIS-held territory.Three ISIS supporters stabbed a Jewish teacher in Marseille, France, in mid-November.One of the attackers reportedly openly displayed his support for terrorism by wearing an ISIS T-shirt, as if it were no different from a Pepsi logo. Is ISIS-wear the choice of a new generation? Last year, several media outlets reported on a handful of Indonesian websites selling ISIS and more broadly terrorism-related merchandise.Many of them appear to have since disappeared (bad business model?), but not all. The Indonesian website Kavkaz Clothing offers what it calls “Islamic Struggle Wear.”Its Facebook page highlights shirts featuring al-Qaida and praising jihad. In its rhetorical justification the company says, “It’s not about fashion or necessity, its [sic] about identity.”Another Indonesian webstore, Tees.co.id, is also hawking a line of IS-wear that includes T-shirts and hoodies decorated with the ISIS flag. For non-ISIS aficionados, the site also sells a T-shirt emblazoned with, “I am Moeslem [sic] but not ISIS.” The shirts sell for about 120 Indonesian rupia, roughly $8.A disclaimer on the site says, “This is not ISIS flag but the banner of tawheed, becareful [sic] !!! don’t take it into the toilet or bathroom.”Pictured below is another T-shirt sold by the online store that more blatantly supports ISIS and has no such disclaimer.If ISIS isn’t your cup of terrorist tea, this store covers the whole jihadi universe. They sell shirts emblazoned with the Hamas logo and pictures of Hamas founder Sheikh Ahmed Yassin. For old-school radicals, the site also offers shirts festooned with images of the late PLO leader Yasser Arafat meeting with Ayatollah Ruhollah Khomeini and Osama bin Laden. T-shirts featuring Adolf Hitler have since been removed.Indonesia is not the only country where some businesses are trying to cash in on the ISIS brand. British photographer Guy Martin last year documented for Time his discovery of an ISIS gift shop in Istanbul selling T-shirts, mugs and keychains.The fight against ISIS and extremism has thus taken on a new and odd dimension. It seems unlikely – but not impossible – that ISIS actually receives part of the profit from the sale of this merchandise. However, the terrorist group receives something far more valuable: visibility and publicity. More than 30,000 foreign fighters have joined jihadist forces fighting in Syria and Iraq. These fighters have been largely radicalized through social media, Internet conversations and local extremist preachers. And now there’s merchandising. ISIS-wear allows devotees or just tacit supporters of the group to literally wear their affiliation on their sleeves.The leap from wearing a sleek T-shirt to being a newly minted jihadi may be a short one. And giving ISIS the imprimatur of permanency is something the world should avoid at all costs. Shutting down these stores, particularly those outside Western jurisdictions, may be difficult, but it’s well worth the effort.
The author is a research analyst with the Counter Extremism Project (CEP), a not-for-profit, non-partisan international policy organization formed to combat the growing threat from extremist ideology.