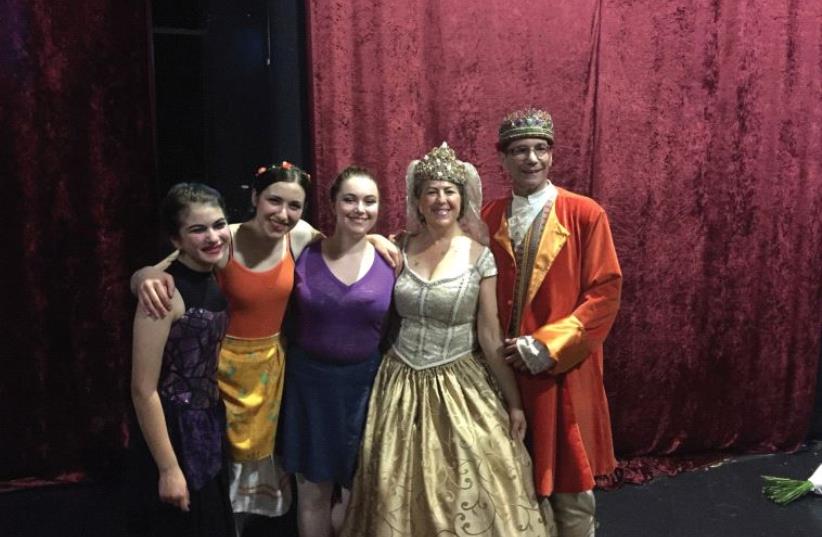 THE AUTHOR and family on stage. He recalls a unique performance and what it means for Israel.
(photo credit: COURTESY KOBI AMSALEM/EFFECT PHOTOGRAPHY)
Advertisement
In 1999, Tal Aviran, a philosophy doctoral student born in Haifa, was sitting in the audience in Tel Aviv’s Suzanne Dellal theater, watching the Kibbutz Contemporary Dance Company perform Aide Memoire.Because Tal was mesmerized by one of the dancers, Belgium’s Audrey Dellisse, 17 years later I ended up dressed in full 18th century court regalia, on a stage in Jerusalem, making my ballet debut as the king in Tchaikovsky’s 1890 ballet The Sleeping Beauty, graced by my queen, my wife. To this Jerusalem tale of an Israeli, a Belgian, an American (me) and a Canadian (my wife) we need to add the true stars: 70 ballet dancers, ranging in age from three to 27, instructed in English, Hebrew, French and Dutch – and including Jews, Muslims and Christians from all over Jerusalem.Truth is, beyond the presence of one very nervous professor, who isn’t a dancers and who had a much larger part than his charming daughter first allowed him to believe, this was just another day at the Jerusalem Dance Arts Center. Every year it mounts this kind of an elaborate performance, wowing the audience with dazzling displays of dance derring do – both traditional ballet and modern.But, more important, day after day, week after week, the artistic director Audrey Dellisse and the business manager (and now her husband) Tal Aviran steep dozens of Jerusalemites in the discipline of dance, introducing them in the best way to the apolitical, nonpartisan, humanistic Republic of Art.With a 14-year-old daughter and a 21-year-old daughter who have been in the studio since a year after it was founded in 2006, I have always been impressed by the multiple roles Audrey takes on in her students’ lives. She is mother hen and muse, inspiration and disciplinarian, fitness instructor and nutritionist, role model and adviser, tour guide to Western civilization’s past cultural riches and pioneering prophet helping to shape a more welcoming, friendly, constructive, moral, pluralistic Jerusalem, Israel and world. In short, she is a master educator, helping her students become the best that they can be by showing them the best the world has to offer.Having invested many hours recently in rehearsal upon rehearsal, I am also pleased to report that, despite the years, and two children, Audrey is as graceful as ever. To watch her run her students through the paces, able in a flash to dance one role after another, bringing her elaborate choreographies to life, is simply a joy. She stands there, hour after hour, playing a kind of 14-dimensional chess game in her head, understanding how each dancer can fit into the broader vision that comes to life days, weeks, or months later in the year-end finale.Similarly, to watch the students interact with each other, coaching one another, encouraging one another and befriending one another is equally delightful.On the day of the performance, at Jerusalem’s Beit Mazia theater, Audrey and Tal had prepared a chair for each dancer, with the dancer’s name on it – and the various costumes the dancer would use that day – in order. Audrey makes most kids’ costumes by herself. My wife and I were dressed, in another Jerusalem story, by a Sorbonne-trained French seamstress, Françoise Coriat, who studied classic French court attire and hand sews replicas for the theater. As they prepared for the performance, the older students helped the younger students with makeup, hair-styling, costumes, stage positioning, and, of course, nerve-calming.To get polemical about the studio’s delightful, natural mix between Arabs, Jews and foreigners would be to inject a falseness and politics to something that is authentic, spontaneous, innocent. The ballet studio offers a little bubble showing what Jerusalem can be – and often is, away from the headlines. Over the years, some religious Jewish girls trained in the studio – then skipped the final performance to avoid dancing in mixed audiences in public.This year, one student rehearsed intensely despite fasting during Ramadan, and happily ate the pizza we brought to rehearsal – after sundown. At the performance, looking into the audience, I saw kippot on heads, crosses around necks, with everyone united and delighted by their children’s artistic prowess.Unfortunately, those in the coexistence business often want places like this to self-consciously trumpet their bridge-building, while too many have forgotten that Zionism envisioned this kind of natural, humanistic, nonpartisan openness. These organic, grassroots expressions should be nurtured – and supported! In his 1998 book On Being A Jew, the Harvard Professor James Kugel imagines a dialogue about Israel and Zionism which includes a Zionist booster emphasizing Israel’s “very tasty tomatoes.” “Tomatoes?” the booster’s interlocutor asks, wondering instead about “the Jewish people, the Jewish state.” The booster answers: “In my experience, it is the Zionists who return to America and only the tomato lovers who stay.”What we might call Professor Kugel’s “Cherry Tomato Zionism,” is more sensual, more prosaic, more real, but as profound as the usual “Meat and Potatoes Zionism” of Herzl and Jabotinsky, of Begin and Ben-Gurion. It’s a Zionism of the everyday, of real life, of treating Israel as a viable place to live not just an ideological cause.Gems like the Jerusalem Dance Arts Center are not just hothouses for dance students and Jerusalemites coexisting easily together. They are also the institutions that express some people’s Cherry Tomato Zionism, making Israel and Jerusalem livable, meaningful, inspiring and fun.

The author, a professor of history at McGill University, is the author of The Age of Clinton: America in the 1990s, published by St. Martin’s Press. His next book will update Arthur Hertzberg’s The Zionist Idea. Follow on Twitter @GilTroy.