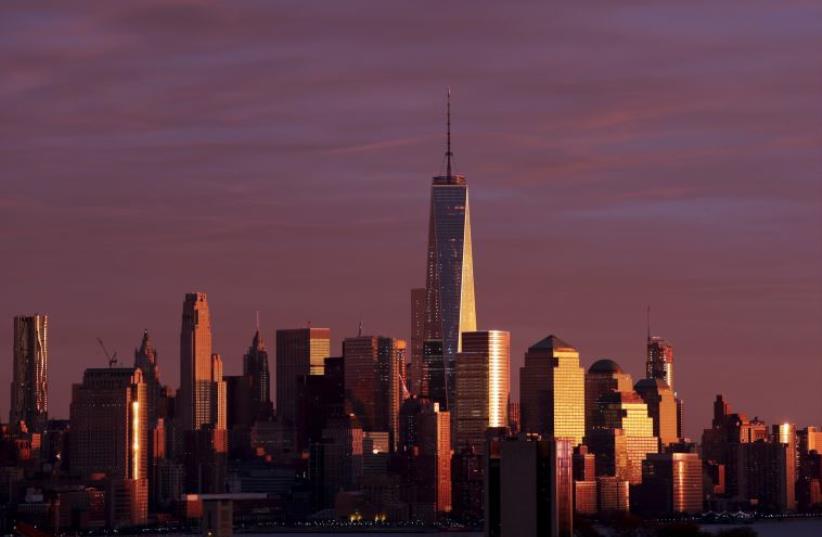 The Manhattan skyline
(photo credit: REUTERS)
Advertisement
Last week Palestinian terrorists killed one Israeli, critically wounded another, and created three more orphans. So far, 31 Israelis have died since October, leaving 55 children bereft because Palestinians decided once again to undermine any chance of peace by murdering innocent men, women and children.Yet with Americans focusing on Donald Trump’s presidential push and Leonardo DiCaprio’s Oscar chances, I barely heard about this suffering in my US travels. Even in North America, even among much of the Jewish community, Palestinian terrorism against Israelis is not news, especially when the murders occur in “the territories.”Too many engaged American Jews are disengaging from Israel. One leading non-Orthodox synagogue in Manhattan shifted its annual social service trip for teens from Israel to Peru because some parents feared Palestinian terrorism (others objected). I won’t name the synagogue out of respect for the teens, but I cannot respect the parents’ cowardly, insulting and illogical hysteria. Peru’s murder rate is 9.6 per 100,000 people; America’s is 3.8; Israel’s is... 1.8.These parents chose to raise their children in post 9/11 New York (with a murder rate of 5.0 then, 4.0 now). These teens were toddlers when Osama bin-Laden destroyed the World Trade Center and began a wave of terrorism in New York that requires constant vigilance.Think of the message those pusillanimous parents gave their kids. They taught that the answer to terrorism is to cut and run, not stand and fight. They showed how easily they succumb to the terrorist’s mind game, running from an objectively safer country, which is statistically safer than their own hometown, to a more dangerous country because terrorist attacks are flashier than random criminal acts. They affirmed that New York is their home, worth fighting for, worth living in, worth their loyalty, no matter what al-Qaida and Islamic State and other maniacs might do. Yet they revealed that their relationship to Israel is conditional, contingent, only a matter of convenience, easily jettisoned when evil strikes.For most, this foolish, sloppy decision reflects me-first indifference, but for a loud, vocal minority that overstates its mainstream popularity, the turn to Peru reflects blame-Israel-first politics. I regret to report, having visited 16 North American cities since October, that I heard more anger in some pockets of the Jewish community about Prime Minister Benjamin Netanyahu’s speech in Washington last spring than about the Palestinians’ eruption of violence this fall. It seems these parents would be less willing to abandon Israel if some of them didn’t blame Israel for being targeted by terrorism.The outrage gap reflected in the greater fury against terrorism in Paris rather than Jerusalem is rooted in the greater distancing toward Israel in general. While most Jews and most Americans remain supportive of Israel, the elites who attend this Manhattan synagogue have lost their balance – they have been doing too much wrestling, not enough hugging. They have decided that if the Palestinians are so crazy as to send their teens after our teens they must have a rationale, not realizing that if the Palestinians were more rational they could make more progress.The sick victory of anti-Semitism has us, after centuries of hatred, still blaming ourselves too much for our suffering. The hatred you need to become a terrorist, to override all rules of society and morality, and risk your life to harm innocent civilians, is so big it dwarfs Israel’s sins. Yet, too many modern Jews have become Moonies, following the UN Secretary General Ban Ki-moon’s logic, justifying the terrorism as a reasonable response to Israeli sins. Do people really think that the kids slashing other kids would be satisfied if only Netanyahu were more conciliatory or Israel redrew its borders? Raised on Jew hatred, trained to kill, these villains crave blood – and Israel’s destruction.I wish the cowering parents had given their kids a more mixed but profound message. On one hand, we in Jerusalem are saying: “Please cry for me New York Jewry. Where are your vigils against terrorism? Where are your collections for the orphaned children? Where are your twinning programs adopting these orphans or sharing some bar and bat mitzvah booty with them? Where are your newspaper features listing the victims? In short, where is your loyalty, your empathy, your support, your solidarity? “With Hamilton tickets selling at $900 a pop, with Brooks Brothers suits costing $1,198.90 and Manolo Blahnik Suede Pumps at Barneys going for $595, is there any room left in the budget for soul essentials like helping others?” At the same time, we are saying: “Cry but don’t whimper; shed tears for the victims but don’t run away from the rest of us. Put the terrorism in perspective. The Palestinians want us to underrate the individual loss – the evil crimes they commit against innocent families – while exaggerating the general danger. In fact, it is the opposite. Never underestimate the individual loss but don’t overestimate terrorism’s communal peril.”Life continues in Israel. We made some security adjustments, but the holy “shigra,” the daily routine, continues. Diaspora Jews should learn from their Israeli brothers and sisters. Rather than canceling trips, plan more visits. Rather than blaming Israelis for being stabbed, blame the Palestinians for cultivating their sick culture of violence. Rather than giving terrorists victories they don’t deserve by validating their behavior, start pushing back, fearlessly, angrily, proudly. As precious as their children are to them, living in New York was too important to all those pusillanimous parents to leave after 9/11. I wish keeping a strong, vital, satisfying connection with Israel – as well as maintaining their own democratic and Jewish dignity – was as important to them today in 2016 as staying close to Zabar’s and Barney Greengrass was to them in 2001.The writer is the author of The Age of Clinton: America in the 1990s, just published by Thomas Dunne Books of St. Martin’s Press. His next book will update Arthur Hertzberg’s The Zionist Idea. He is a professor of history at McGill University. Follow on Twitter @GilTroy.www.giltroy.com