Center Field: Save us from bullying bigots and Bibi’s blustering 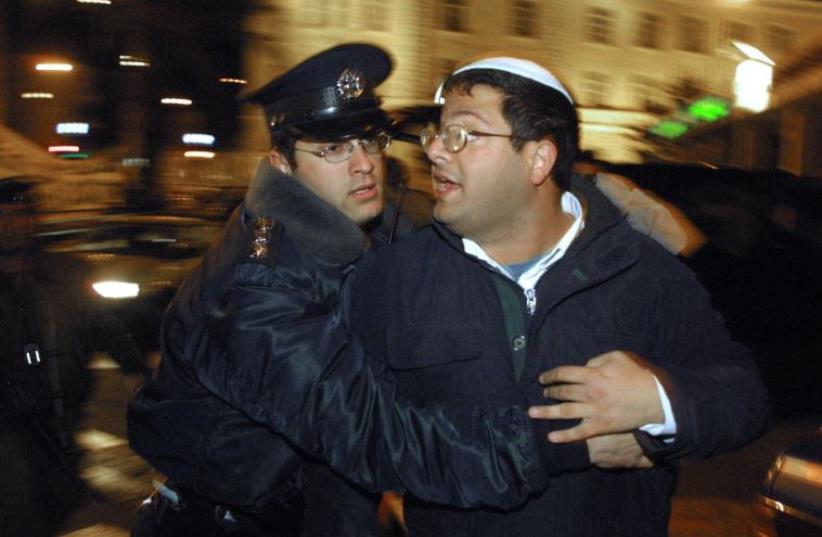 I’m turning to you in desperation. You’re a modern Jewish hero, an educator, a mensch. You’re a noble anomaly: steeped in politics yet not ethically-sullied by it.

The Jewish people need your help. Desperately grasping power, Prime Minister Benjamin Netanyahu wants Israel to cross red lines and mainstream bigots by allowing Otzma Yehudit extremists who think that hating Arabs defends Zionism to run for the Knesset, although such prejudice is anti-Zionist and betrays Israel’s identity as a Jewish democratic state.

I don’t have to tell you that – you know that.

You know it’s not worth getting re-elected based on Bibi’s big lie. He thinks that Israelis are stupid enough to believe his double-switcheroo: that centrist ex-generals are “leftist,” and unacceptable while bigoted thugs are acceptable. You know that in blackening the Blue and White Party while blue-and-whiting the blackguards’ party, Netanyahu is betraying Ze’ev Jabotinsky’s and Menachem Begin’s truly liberal nationalism. How many elections can he win – can you win – by shrieking “the Arabs are coming, the leftists are traitors,” especially when today’s main rivals aren’t leftists?

To protect our beloved country, Israel – and your long-term historical reputation – risk your short-term political standing. Mobilize your Likud colleagues and declare: “We regret the ‘technical’ union of joining Bayit Yehudi with Otzma Yehudit. There’s no bonding with bigots. We won’t serve in a coalition with bullies, with Kahanists, with haters of life and lovers of Baruch Goldstein, the mass murderer. We’d rather lose an election than lose our souls or betray Zionism.”

In Friday’s edition of The Jerusalem Post, you toasted the quality politicians who climbed Likud’s list, as the moral deadweight plummeted: “These primary elections gave me hope,” you said. “There’s a change of attitude among Israelis. They’re sick and tired of the shouting matches and gimmicks.”

Beware, you’re in history’s crosshairs. Every day of silence diminishes you. Netanyahu’s malevolent matchmaking revealed that an MRI of his soul wouldn’t work; the magnetic signals would find nothing there to bounce off of.

Netanyahu’s not evil. His soul isn’t cluttered with the debris of Kahanist hatred; it’s just a moral moonscape. Just as he’ll do whatever it takes to win, he’ll sacrifice anyone’s reputation – including yours – which so far props him up, through your silence.

Please, do something! Don’t stand by as Netanyahu mainstreams an ideology so inimical to the Zionist cause. In the 1980s, Yitzhak Shamir – no wimp – called Kahanism “a dangerous phenomenon.” The Knesset and the High Court of Justice banned such venom from mainstream politics. Last year, in my own small way, I rejected these bigots from my anthology The Zionist Ideas – every movement needs red lines.

How could you live with yourself if you and your party boosted these ideological hooligans instead of excommunicating them?

ADMITTEDLY, I’M OFFERING TERRIBLE political advice. Fomenting intra-party dissension and confronting your amoral leader during this close to the election risks making you the scapegoat if you lose – and Netanyahu would seek revenge regardless.

But I’d rather bank on Israelis’ intelligence and fairness vindicating you than fear Netanyahu backstabbing you. And this moral calculus is child’s play for you. You had the guts to confront the Soviets, survive the Gulag. You know that conscience counts.

We all smell Bibi’s fear. Even if he wins, Netanyahu is over. You can help define a post-Bibi, newly-ethical era, shaping that “new attitude” you detected among Israelis, offering moral leadership as you’ve always done.

We don’t know each other well, but I’ve been a big fan of yours since I visited Russia in 1985. Your name was on every refusenik’s lips. Your ebullience helped you survive the Soviet dictatorship’s hell – and brought you to the democratic helm of the Knesset.

Play hooky tomorrow. Go home. Take deep breaths and ask yourself “Is it worth it? What price is my passivity?” You’re not an innocent bystander. Can you accept being a silent consenter, a collaborator in this assault on Israeli democracy, our Zionist quest for goodness, the Jewish values we cherish?

You know the answer. You’re better than this. Much better.

I’m begging you because you’re first on the list after Bibi, the demagogue spreading despair and division to win. But I’m challenging everyone on the Likud list – particularly the top ten, people of quality.

Among them, single out Gideon Sa’ar, Yoav Gallant, and Nir Barkat: the three of you either just rejoined or recently joined Likud – you owe Netanyahu nothing! Why carry this mark of mainstreaming haters on your consciences – and your reputations? Have you all become Bibi defenders so quickly?

While contemplating your next move, consider Rafi Peretz’s moral collapse. He, like you, Mr. Speaker, was revered until last week as a master educator with a spine of steel and golden principles. He had the patriotism, the Zionist vision, and the ethical grandeur to dance with soldiers implementing the disengagement even while protesting it in 2005.

Peretz was in politics as head of the Jewish Home for only fifteen days, before Bibi broke his spine. Uniting with Kahanists reduced Peretz to a calculating co-conspirator.

With any luck someone will pass this essay to you – and the other Likud leaders who can make history here. I fear that at first glance you might consider my plea unfair and hostile. Hopefully, you’ll realize that it’s written with reverence.

Ultimately, I’ve got your back. I’m looking out for your historical reputation. Netanyahu’s threatening it. You can save it – and us.

Recently designated as one of Algemeiner’s J-100, one of the top 100 people “positively influencing Jewish life,” Gil Troy is the author of the newly-released The Zionist Ideas, an update and expansion of Arthur Hertzberg’s classic anthology The Zionist Idea, published by the Jewish Publication Society. A Distinguished Scholar of North American History at McGill University, he is the author of ten books on US history, including The Age of Clinton: America in the 1990s.