It’s good to be outraged by the killing of innocent men at traffic stops and by the slaughtering of five men doing their jobs, protecting civilians. 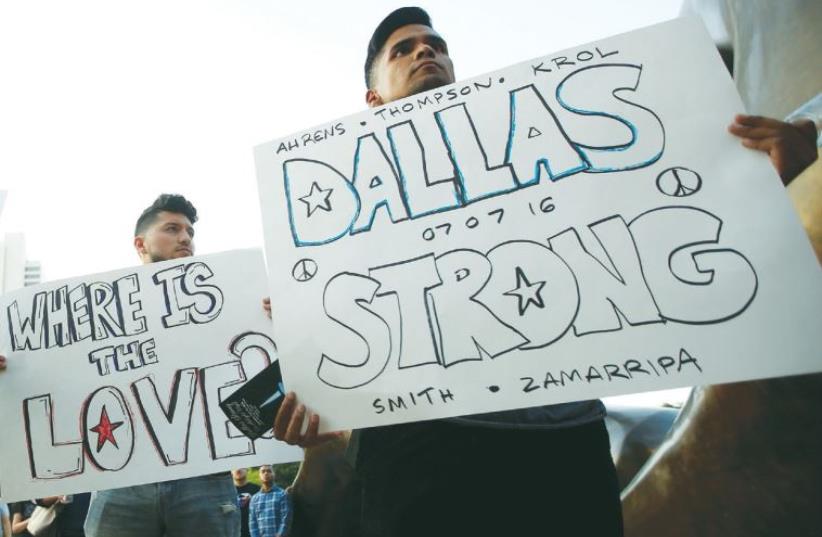 SUPPORTERS ATTEND a candlelight vigil at Dallas City Hall on Monday following the multiple police shootings in the city.
(photo credit: REUTERS)
Advertisement
Americans are reeling. The shootings in Baton Rouge, Minnesota and Dallas during this confusing, dispiriting presidential campaign have depressed the nation. To watch a video of a man dying, having, according to his girlfriend, simply attempted to pull out his gun license, not a gun, to see the faces of five policemen shot down in Dallas, is terrifying enough. But to see how impotent America’s three most important leaders are in responding makes things worse. These shootings offered a leadership moment, an opportunity for Barack Obama or Hillary Clinton or Donald Trump to transform Americans’ fear and worry and anger and confusion into a constructive response.Yet, once again, each of them in their own distinctive way failed miserably, leaving Americans to languish.Here’s the good news: it’s good to be outraged by the killing of innocent men at traffic stops and by the slaughtering of five men doing their jobs, protecting civilians. Back in the 1970s, when 46 police officers were killed in New York City alone, cop-killings were more routine – and didn’t trigger such national outrage.Just as much of the world isn’t outraged often enough by Palestinian terrorism, Americans then were too numb to the violence. Outrage suggests a situation is unacceptable – it’s an essential precondition to improvement. My wise uncle Win Gerson, remembering how Jewish kids were beaten up regularly in the Bronx in the 1930s and 1940s by Italian and Irish goons, likes to say: “Today, they call it a hate crime, back then, we called it life.” Hate crimes, police killings, and terrorism – when outrageous – must stop, inviting change; “life” goes on, inviting torpor.So, no, we don’t accept police slaughter or police brutality as “life.” And Americans must get more outraged more frequently about levels of violence on the streets (and the screens) they have tolerated for too long – even with the drop in crime. But we should see the subtleties, dimensionalities, complexities, and not fall sloppily into the simplistic, polarized perspectives of one faction or another. Blue lives matter, black lives matter, all lives matter. We cannot believe everything we see on YouTube. We don’t know what happened at the Minnesota traffic stop before the filming began.I heard a woman clearly upset – but I also heard the stress in the cop’s voice – he didn’t go to work expecting to shoot anybody.We also cannot believe everything we hear about it being “open season” on blacks. A Harvard economist, Roland G. Fryer, Jr., just released a study showing that while blacks “are more likely to be touched, handcuffed, pushed to the ground or pepper-sprayed by a police officer.... when it comes to the most lethal form of force – police shootings – the study finds no racial bias.” Fryer called this “the most surprising result of my career.” His shock shows that outrage can blind – since the Ferguson shooting everyone “knows” that cops frequently shoot down blacks for no reason – except they don’t.So, Americans are wondering, where are our leaders? Here, Obama botched the job. Today, black and white Americans are less optimistic about race relations than they were under Bill Clinton and George W. Bush.That is a devastating indictment. The man who during the 2008 campaign spoke so eloquently about race relations to excuse his attending the church of his race-baiting, demagogic preacher Jeremiah Wright has done little since to shape a constructive conversation that unites the decent majority in America that wants to heal.Obama’s supporters, of course, will blame his opponents’ racism, Republicans’ recalcitrance, the blogosphere’s hysteria. But the sign on Harry Truman’s desk was correct – the buck stops there. Franklin Roosevelt called the presidency “pre-eminently a place of moral leadership.” FDR pushed Americans to take responsibility for the poor, even though everyone was feeling impoverished, to think about the downtrodden, even though most felt down. He had his enemies. But rather than blaming others, he broke through the static and molded effective, constructive responses.Similarly, in 1992, as a candidate, after the Los Angeles riots Bill Clinton visited Los Angeles and empathized with the residents – with credibility, having visited before. He then, carefully, deliberately, appeared on the Arsenio Hall talk show, just to play his saxophone and show another side of him. After that, he confronted Sister Souljah, the rapper who justified killing whites in Los Angeles. This multi-dimensional, centrist, subtle response contrasted with president George H.W. Bush’s empty rhetoric and changed the momentum of what in spring 1992 seemed to be a doomed Clinton campaign.So far, neither Donald Trump nor Hillary Clinton has responded to this national crisis in a memorable, electric, inspiring, game-changing manner. Trump’s candidacy promises more violence through his harsh rhetoric, Clinton’s, through her empty rhetoric. American Jews fear this growing American powder keg on the streets amid the tragicomedy in politics. Israelis worry about America while resigned to our own leadership vacuum, wherein Netanyahu runs in place, rarely addressing important issues, and, like Obama, not even trying to unite, inspire, or heal the nation.Of course, America’s race and crime problems require serious policy reforms, thoughtful community outreach.But in healthy democracies, systemic efforts sometimes start with healing rhetoric, helpful showmanship, thoughtful framing. So far, little of that has been on display – feeding the despair.The author, professor of history at McGill University, is the author of The Age of Clinton: America in the 1990s, published by St. Martin’s Press. His next book will update Arthur Hertzberg’s The Zionist Idea. Follow on Twitter @GilTroy