Let’s judge the candidates by their public stands and actions, not by illegally- obtained or illegitimately-publicized private exchanges. 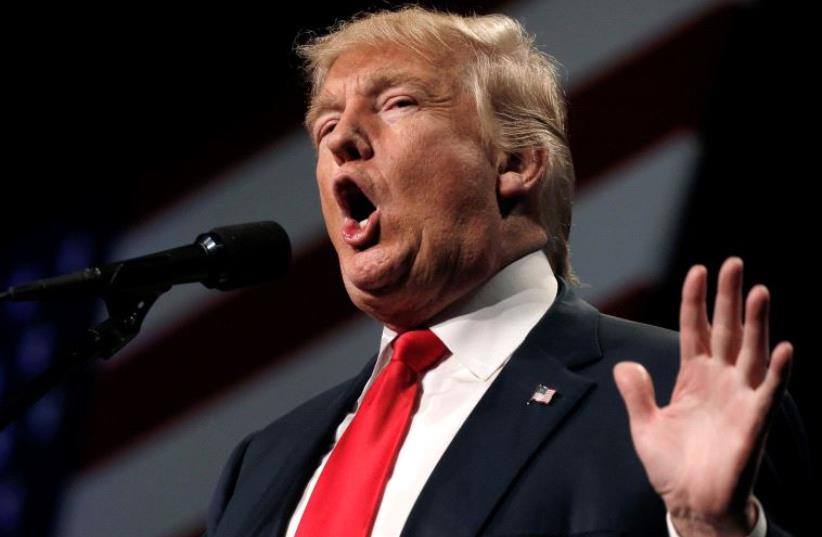 Republican presidential nominee Donald Trump speaks at a campaign rally in Reno
(photo credit: MIKE SEGAR / REUTERS)
Advertisement
As Americans stagger toward Election Day, with millions disgusted by both candidates, the ahistorical hypocrisy and blind partisanship is intensifying.Dictatorships rely on a Big Lie, what Adolf Hitler in Mein Kampf called a falsehood so “colossal” no one would believe that someone would dare “distort the truth so infamously.” Democracies today are menaced by little lies, swarms of distortions, exaggerations, contradictions and falsifications that partisans believe and promote out of loyalty to their cause, ultimately assaulting the truth just as violently. It’s so exhausting to refute the blizzard of little fibs they accumulate into an avalanche of untruth, poisoning our culture and our politics.Consider the outrage currently enveloping Donald Trump for his disgusting banter with Billy Bush. I am as appalled by Trump’s boorish bullying as I was by Bill Clinton’s reprehensible behavior toward women in the 1990s. But when I criticized Clinton’s pathology back then, I was called naïve, a prig, and – the ugliest word fellow academics can deploy – conservative.Yet remember, Bill Clinton said “it’s time to stop the pursuit of personal destruction and the prying into private lives and get on with our national life.”And Hillary Clinton spent years requesting a “zone of privacy.” While Bill Clinton’s behavior humiliated her she also was his enabler-in-chief, bullying many of her husband’s girlfriends into silence, then denying accusations, excusing them, and, ultimately in 1998, leading Americans on a mass journey that ended with her and most of them forgiving not only his affair with Monica Lewinsky but his criminal efforts to cover it up because, as we were told at the time, “everyone lies about sex.”Bill Clinton didn’t just deny the allegations or hide his indiscretions as some – not all – previous politicians had done, he rejected the aspirations to virtue all previous presidents accepted by being embarrassed if they were caught acting inappropriately. His insistence that “character is a journey, not a destination,” his emphasis on doing his job instead of being a role model, resonated with many Baby Boomers rebelling against the 1950s’ Ozzie and Harriet, Father Knows Best script.So why did Democrats who are now so furious at Trump’s sexism and bullying excuse Bill Clinton’s behavior? And why weren’t those Republicans – and Evangelicals – now excusing Trump’s abuses equally soft on Bill Clinton in the 1990s? It’s also dismaying to see how leaks of private exchanges are defining this presidential campaign more than substantive public communications. The timing of the leak of the 11-year-old Trump videotape is suspicious, having surfaced conveniently to inflict maximum damage on Trump’s campaign. And Wikileaks shouldn’t be dominating the current conversation about Hillary Clinton.Wikileaks traffics in stolen property. A hacked email is a purloined letter. All who quote from such an email are passing on goods that are as illicit as a stolen computer. Every honorable citizen – and reporter – should boycott these illegally obtained items, as scrupulously as we avoid buying shoplifted goods.Moreover, advisers like John Podesta should be able to brainstorm, joke, scheme, think and then give leaders like Hillary Clinton the best advice they can – without every thoughtless email being shared globally.Both Democrats who are quoting Trump’s private exchange with Billy Bush and Republicans who are quoting John Podesta’s emails should stop peeping.Let’s judge the candidates by their public stands and actions, not by illegally- obtained or illegitimately-publicized private exchanges.This epidemic of little lies in the presidential campaign helps explain the powerful onslaught of falsehoods about Israel, too. Ultimately, both the Trump and Clinton forces judge behaviors – and assess the legitimacy of information obtained – with partisan blinders. Whatever hurts their candidate they reject; whatever hurts their rival they embrace.In such a relativistic, amoral world, it’s easy to understand how some of UNESCO’s idiot partisans can vote down the Jewish people’s ties to the Temple Mount – their animus against Israel trumps the truth.In such a world, it’s easy to understand how representatives of Americans for Peace Now and B’Tselem can participate in the kangaroo court UN Security Council “hearing” with the foregone conclusion: “Illegal Israeli Settlements: Obstacles to Peace and the Two-State Solution” – their animus against settlements blinds them to their complicity in joining an irrational, illegitimate “Blame Israel First” festival. And in such a world, it’s easy to understand how on campuses, too many (not all) feminists overlook Palestinian and Islamic sexism, too many (not all) gay activists overlook Palestinian and Islamic homophobia, and too many (not all) African-American activists overlook Palestinian and Islamist racism. Jews are blindly, irrationally, unfairly blocked at the intersection, banned from the “intersectionality” that unites all forces fighting oppression because, having been tagged as “privileged,” our pain is invisible, our cries are unheard, our blood is cheap.Obviously, none of this is new. Neither American nor Middle Eastern politics have ever inspired scrupulousness or honesty. But in this polarized Internet age, the democratization of technology empowers partisans to spread lies frequently, incessantly, obsessively. In this era of tweets and soundbites, headlines, hysteria and hypocrisy trump thoughtful analysis and complexity. In this postmodern moment of emotional excess, feeling aggrieved counts more than being right. And so the little fibs mount, eroding our faith in leaders, institutions and the world around us.Big Lies prop up dictatorships; all these little lies undermine democracy.The author, professor of history at McGill University, is the author of The Age of Clinton: America in the 1990s, published by St. Martin’s Press. His next book will update Arthur Hertzberg’s The Zionist Idea. Follow on Twitter @GilTroy.