In returning to Zion, Jews returned to normal, relying on brains and brawn, creating new images – and new realities. 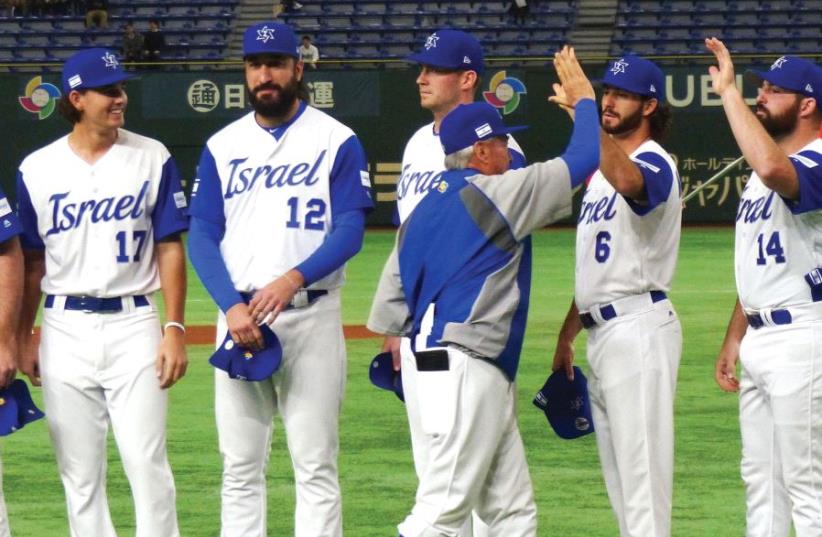 Israel celebrates its 4-1 victory over Cuba in the opening game of the 2017 World Baseball Classic quarterfinals.
(photo credit: MARGO SUGARMAN)
Advertisement
Lasting stereotypes are like good friends – we keep ’em around because familiarity is comforting. Perhaps that explains the anachronistic “oh-my-God-Jewscan-hit” articles describing Team Israel’s surprising fourgame win streak in the World Baseball Classic. True, Israeli baseball is like American falafel: an import. And there is something anomalous about the Orthodox-Jewish-looking mascot – the Mensch on the Bench; a dugout megila reading; and what my grandmother would have called “these big galoots” removing their hats to reveal blue kippot on their heads as Israel’s national anthem plays. But all but two players are American Jews. And American Jews’ love affair with baseball is an old story, as is the emergence of strong Jews who can hit little white balls Hank-Greenberg-far – and hit back when necessary.So, rather than a Purim Masquerade of loser Jews finally winning – the Israel Team’s surge is more like ideological mishloach manot – a Purim gift basket brimming with lessons about who we are, who we were and who we can be – as individuals and a people.Writing in this newspaper, my friend Elli Wohlgelernter, a true baseball fanatic, hit the grand slam metaphor – or dare I say speared the lox with the fork: “Team Israel” really is “Team Jew.” American Jews can join Team Israel because, while the Olympics “require participants to be passport-holding citizens of the country,” the World Baseball Classic welcomes those simply “eligible to hold passports of the country they are representing.”SO, LESSONS one and two kick in. First, American Jews who think Judaism is only a religion, and anti-Zionists who deny our national rights to our homeland, take note: Jews are a nation. Italy wouldn’t have “Team Christian,” but Israel essentially has “Team Jew” because we are a people with a collective consciousness – Team Israel is one of many Israeli vehicles expressing that identity. The particularly Jewish pride in this team’s accomplishments, and the team’s extraordinary comradery reflect the depth of “Jew Glue,” the Jewish people’s bond with one another; these national and not just religious connections that cross borders – and centuries.Team Israel also explains Israel’s much-maligned Law of Return. Critics demonize Israel because it grants Jews, who were slaughtered when homeless, automatic citizenship. These Blame-Israel-firsters pretend that other democracies have open borders, forgetting that the US fast-tracks fat cats with half a million dollars to invest, Canada fast-tracks skilled blue-collar workers and Italy, like Israel, fast-tracks immigrants with ancestral ties to the homeland. This principle is consecrated in international law as Jus sanguinis, Latin for “right of blood.”The Jewish players’ eligibility highlights Israel’s role as the Jewish national homeland at its most normalized, benign and constructive. Israel is an identity hologram: for some Jews, the homeland is home; for others the homeland evokes warm, home familial feelings of rootedness without becoming one’s residence.For more than a century, baseball has been the great Americanizer, and the great normalizer for generations of American Jews. I often begin lectures about American Jewish history by listing with the students an all-Jewish all-star baseball team, boasting that Polish Jews couldn’t field such a team for Poland’s national sport. And many of us who can’t play baseball well spout statistics, which in baseball-land confers its own status. This has made baseball a great American Jewish wonder drug, making Jews – especially Jewish boys of certain generations – feel normal, proud, strong, free; heck, I even know a New York-born writer for this Israeli newspaper who calls his column... Center Field! Israel, of course, has been an even more potent Jewish wonder drug, changing the image of the Jew – in Israel and beyond – from the eternal “galut” victim, wispy and wimpy, to the newly-strong Jew, proud and loud. The Zionist revolution proving that Jews could be soldiers, farmers and jocks not only built Israel, it fortified Jews –and the Jewish image – globally. Even American Jews’ body image (and political potency) improved thanks to Israel’s inspiration. The joke in the movie Airplane that a super-thin book is “Famous Jewish Sports Legends” lost its bite with Moshe Dayan and Yoni Netanyahu, with the Six Day War and the Entebbe Hostage rescue.Purim has ended, but 2017’s nahafochus, bizarre reversals, persist. America still has a reality-TV star now called “Mr. President.” A man who consistently undermines attempts at peace, honors terrorists, subsidizes their families and refuses to relinquish the presidency he has held eight years after his four-year-term expired, Mahmoud Abbas, is still called “moderate.” Yasser Arafat, despite murdering hundreds of people, Jews and non-Jews, while also killing the Olso peace process by rejecting compromise, is still called a “hero” – most recently by another margarine moderate, the Israeli Arab politician Ayman Odeh, whose extremism keeps protruding like the big distended belly of an out of shape retired football pro who still wears slim-fit shirts and skin-tight jeans.So, yes, in such a crazy world, the Israel team’s unlikely ascent is a delightful distraction. But more than a Purim story of impersonating, it’s a Passover story of liberating. Zionism freed Jews from the stereotypes that came along with the oppression we endured for millennia. In returning to Zion, Jews returned to normal, relying on brains and brawn, creating new images – and new realities – even if many still imprison us in the stereotypes of yesteryear, and not just at the World Baseball Classic.

The author, a Distinguished Scholar in North American History at McGill University and a Visiting Professor at the Ruderman Program at Haifa University, is the author of The Age of Clinton: America in the 1990s, published by St. Martin’s Press. His next book will update Arthur Hertzberg’s The Zionist Idea. Follow on Twitter @GilTroy.
Advertisement
Subscribe for our daily newsletter