Several ISIS-inspired cells have been busted by the Shin Bet (Israel Security Agency) and dozens of Israeli Arabs are believed to have traveled to Syria to join the organization. 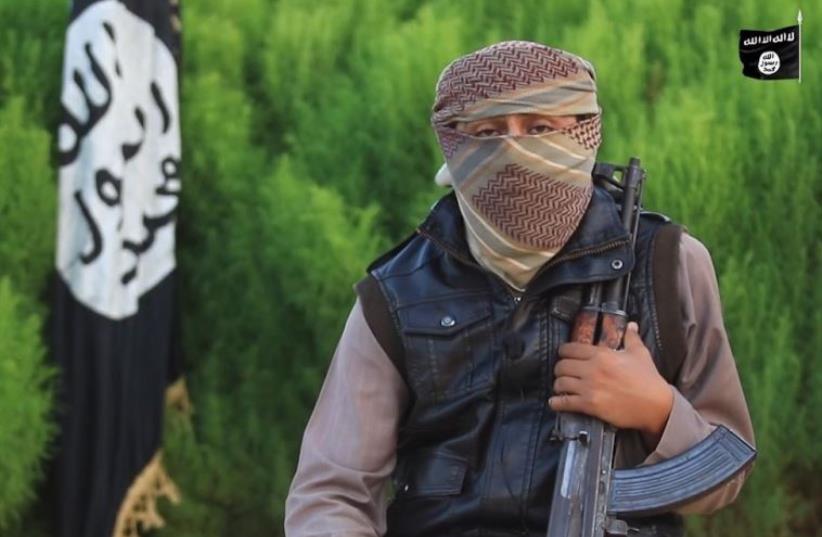 ISIS militants threaten Israel in propaganda video
(photo credit: ISLAMIC SOCIAL MEDIA)
Advertisement
Iman Kanjo, an Israeli-Arab mother of five from the northern town of Shfaram, was sentenced to 22 months in prison on Monday after confessing to forging links with an ISIS supporter on Facebook, and seeking to travel to Syria to join Islamic State.The following day, three residents of the village of Yatta in the South Hebron Hills were indicted for the shooting attack in Tel Aviv’s Sarona Market in June that left four people dead. Khaled Mahamrah and Mahmoud Mahamrah, who carried out the attack, and a third man, Yunis Aish Musa Zin, who backed out at the last minute, said they had been inspired by ISIS.On New Year’s Day, Nashat Melhem, an Israeli Arab from the northern town of Arara shot three people to death at a bar on Tel Aviv’s Dizengoff Street after being radicalized online. He left behind a black ISIS banner at the scene of the attack before escaping and eventually being shot dead by police after a massive manhunt.Several other ISIS-inspired cells have been busted by the Shin Bet (Israel Security Agency) and dozens of Israeli Arabs are believed to have traveled to Syria to join the organization.According to a recent study by the University of Haifa’s Prof. Sammy Smooha, 17 percent of Israeli Arabs are sympathetic to ISIS, with support levels rising to 28 percent among those who already felt sympathy toward the outlawed Northern Branch of the Islamic Movement So are we seeing the beginning of a trend of ISIS-inspired attacks and increased identification with ISIS among Israeli Arabs and among Palestinians in the West Bank? As with most things, that depends on who you ask.“Not yet,” says Yoram Schweitzer, a senior researcher at the Institute for National Security Studies (INSS). But he adds: “If we see an escalation between Israel and the Palestinians and if we see a real third intifada, then yes we might see more attacks affiliated with ISIS and more attempts to join ISIS.”Schweitzer says, however, that for most Palestinians ISIS is not attractive on an ideological level. “Most of the Palestinians will not join ISIS, because they have their own reservations about the extreme violence directed by ISIS against their fellow Muslims and others, and also ISIS does not address the Palestinian national issue as a particular singular problem,” he says.Veteran Arab affairs correspondent Ehud Yaari, on the other hand, sees a “growing pattern of ISIS-like operations,” such as the Sarona and Dizengoff attacks, “ in which young people who do not seek to join Hamas, Islamic Jihad and certainly not Fatah... are copying the model set in Paris, Brussels, San Bernadino and elsewhere.”Ya’ari warns that Israel has to be very careful “not to allow this pattern to penetrate into the rank and file of the Fatah Tanzim, as they have lots of weapons, or into the rank and file of Hamas.” That, says Yaari, would be a completely different ball game, bringing far more deadly standard weapons into play, not the homemade Carl Gustav submachine guns hammered out in metal workshops and used for example in the Sarona attack, where they jammed repeatedly.He also warns that if ISIS identifies a spontaneous trend of young Palestinians to imitate ISIS attacks in Europe and elsewhere, the organization will spot a potential that it should invest in.Like Schweitzer, Yaari believes that escalation of the conflict with the Palestinians poses the greatest danger in terms of ISIS’s pull and he has a warning for those in the government who favor an aggressive stance vis-a-vis Palestinian violence.“The road is very short to the 30,000 strong Palestinian security services,” says Yaari. “This is why I think that some of the hot-headed proposals that have been made by some of our illustrious ministers – most noticeably by [Bayit Yehudi leader Naftali] Bennett – are very dangerous. Because if you pursue this [line of action] you have to take into account that you are pushing additional sectors of the Palestinian population into this cycle of violence. We have no interest in this.”