Choose Zionism not Zuckerbergism – even at Harvard’s commencement

This American Jewish quest to create the first community without boundaries is impossible, like swimming in the sky. 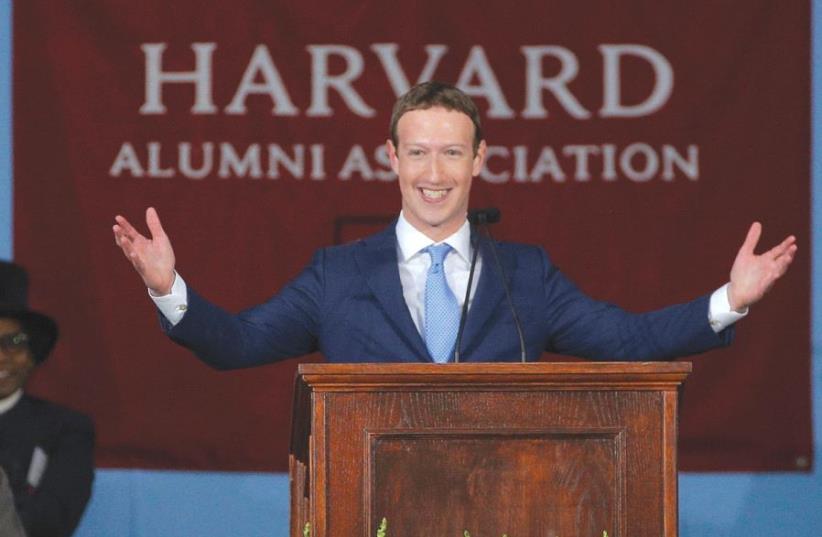 FACEBOOK FOUNDER Mark Zuckerberg speaks during the Alumni Exercises following the 366th Commencement Exercises at Harvard University last month
(photo credit: REUTERS)
Advertisement
Mark Zuckerberg, who at 33 already ranks as one of the most influential Jews in American history, just delivered Harvard’s 2017 commencement address. Zuckerberg’s text should be required reading for anyone curious about Facebook’s agenda, millennial attitudes, modern elite college groupthink – and the challenges facing American Jewry.Here’s the good news. Zuckerberg was charming, idealistic, inspirational. He urged his fellow millennials to care, to reach out, to give back to the community and the world, which have given them so much. “The challenge for our generation,” he said, “is creating a world where everyone has a sense of purpose.” He told a lovely story about John Kennedy visiting NASA in the 1960s and asking a janitor there, who was carrying a broom, what he was doing. The janitor responded: “Mr. President, I’m helping put a man on the moon.” Purpose, Zuckerberg explained, “is that sense that we are part of something bigger than ourselves, that we are needed, that we have something better ahead to work for.”Here’s the bad news: although Zuckerberg excited many Jews by concluding with the “Mishebeirach” prayer he uses as a source of wisdom, his speech was superficially Jewish and deeply non-Zionist. Zuckerberg echoed and now reinforces the postmodern Ivy League Judaism he learned at Harvard: nationalism is bad, cosmopolitanism is good, and identities should not be delivered in the national packages that have worked so well for the past two centuries (with occasional disasters, too!). Instead, he peddled the broad borderless platform Facebook represents and elite American educations today endorse.Zuckerberg understands that the decline in communal workplace cultures and other communities leaves millions feeling “disconnected and depressed.” But while he wants everyone “taking on big meaningful projects together,” he falls for the classic American Jewish contradiction.Let’s build “community across the world,” he cries. “In a survey asking millennials around the world what defines our identity, the most popular answer wasn’t nationality, religion or ethnicity, it was ‘citizen of the world.’” Predictably, in his one implicit slap at US President Donald Trump, he defines “the struggle of our time” as “the forces of freedom, openness and global community against the forces of authoritarianism, isolationism and nationalism.”Zuckerberg endorsed local communities, including “churches or music groups” that “give us that sense we are part of something bigger, that we are not alone.”But he failed to see that real communities contradict being a “citizen of the world,” which means belonging everywhere – i.e. belonging nowhere and to no one. Citizenship entails being situated in a community, which involves commitment.This American Jewish quest to create the first community without boundaries is impossible, like swimming in the sky. Swimming requires water; communities by definition define themselves, drawing lines, creating affiliations, identifying insiders and outsiders.Zuckerberg’s life project, Facebook, annihilates those real ties, creating virtual “communities” of fake “friends.”Facebook reduces that sublime expression of intimacy – friendship – to the loosest of affiliations, watering down something forged in purposeful intensity, not superficial contact.Judaism has never been about annihilating boundaries, diluting expectations, making affiliation easy. David and Jonathan weren’t Facebook “friends.” Judaism teaches that profundity comes from gravitas, community comes from commitment, friendship comes from fidelity. It is easy to unfriend a stranger on Facebook or to drift out of a Facebook “group.” By contrast, consider how we mourn broken friendships and delight in communal achievements.Zuckerberg at Harvard came across as a good person trying to do good in the world. That’s what makes him so dangerous. His youthful nice guy-ness obscures his contagious shallowness. There he stands, the great American Jewish success story, intermarried, cannibalizing Jewish tradition to find some cutesy, anodyne Debbie Friedman song to sing to a de-deified, neutered “source of strength,” “To my daughter thinking about her future when I tuck her into bed.”It’s non-Zionist because he so easily dismisses “nationality, religion or ethnicity,” which have long been the most effective containers of the values he claims to value, the best transmission devices for that sense of purpose he seeks, the ideal scaffolding for the community he claims to desire. It’s non-Zionist because he unfairly clumps nationalism, which in its liberal American or Canadian or Israeli form usually is constructive, with the “forces of authoritarianism, isolationism.”It’s non-Zionist because standing there in Harvard Yard, he evokes no appreciation for the tough Jews who forged his path to acceptance, who stood proud and strong and prickly so that a gawky Westchester nerd with an obvious Jewish name could first get accepted to Harvard – then become so accepted by Harvard.And it’s non-Zionist because that model of Jew-ishness, as lovely as it seems, that Zuckerberg evokes, of Judaism reduced to an emotional or spiritual prop, a cutesy juvenile touch added to bedtime ritual, is an affront to the depth, the grandeur, the multi-dimensionality, the totality of Jewish history.Zionism stands for authenticity, anchoring, integration, continuity. Zuckerbergism stands for superficiality, syncretism, fragmentation, disruption.I am not a Luddite. I was smart enough to buy Facebook stock when it sagged just after its IPO – and I will dutifully post this article on my Facebook page to share with my friends, both fake and real. However, I hope to remain wise enough to stick with Zionism as my identity, my touchstone, my – and my kids’ – true and most precious inheritance.The writer is the author of The Age of Clinton: America in the 1990s. His forthcoming book, The Zionist Ideas, which updates Arthur Hertzberg’s classic work, will be published by The Jewish Publication Society in Spring 2018. He is a Distinguished Scholar of North American History at McGill University.Follow on Twitter @GilTroy.