Christians fear for their lives in the Middle East 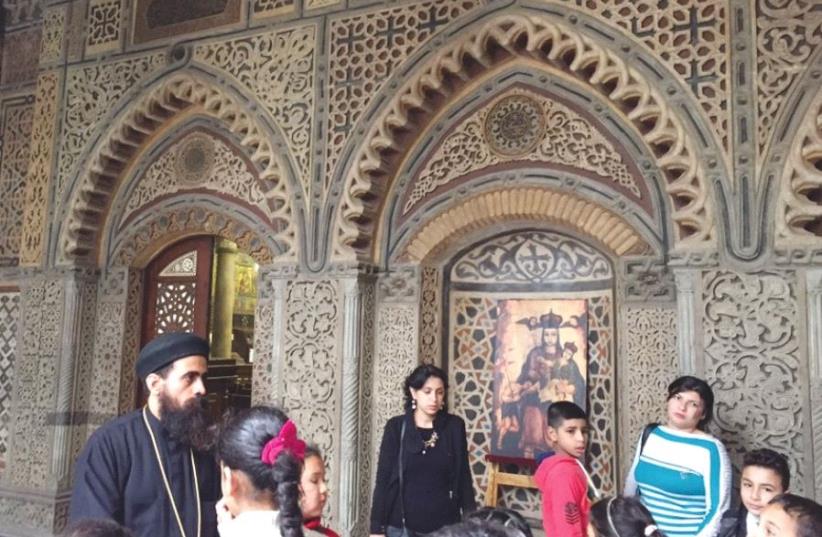 Coptic Christians crowd into a church in Cairo. Copts in the Sinai have recently come under attack by Islamic State
(photo credit: SETH J. FRANTZMAN)
Advertisement
Christians fear for their lives in certain parts of the Middle East. Islamic State (ISIS) has called them its primary target – its “favorite prey.” And still, the plight and the tragedy of Middle East Christians go relatively unnoticed by the larger Christian and Western world.The Christian community in Egypt numbers about nine million. It is the largest Christian community in the Middle East – and ISIS has hit it hard. Most Christians in Egypt are Copts, they have their own pope and their own tradition and they do not genuflect to Rome. They date themselves back to St. Mark in Alexandria during the period of Roman Emperor Claudius at about the year 42 CE, just after the death of Jesus. Copts call themselves “Christians of Egypt.” They are arguably the oldest Christian community in the world.In December about 30 Egyptian Copts, mostly women and children, were massacred and many more were wounded, in their church, by ISIS. Other than AP and Reuters only a handful of media in the world covered the terrorist attacks by running the wire releases. Even fewer made more than casual mention of the atrocities against and persecution of Christians in the Middle East.The events befalling the Christian community in Egypt are not simply newsworthy, they are an essential tool with which to elucidate the fragile status of a minority community in the Middle East – Christians among Muslims. These persecutions are important tools in measuring the activities of Arab governments and their responses to the challenge. Jews standing up and calling attention to the plight of Christians living under Muslim regime and being murdered by ISIS while worldwide Christian leadership remains silent smacks of only a slight touch of irony.We need to prevent the oppression of minorities, and we know the importance of defending those who cannot defend themselves. And while there are those in the Arabic world who say that Jews are exaggerating these atrocities only to make these Muslim regimes look bad, I say poppycock. When extremist groups like ISIS are freely murdering it becomes big news in Israel. The most obvious reason is because Israel may be next, because Israel – as the world should know – is on the front line.Over the past few weeks ISIS has produced and posted a “hit list” of Christians it intends to murder. So far ISIS has murdered seven people; one was beheaded, another was burned alive. A father and son, members of the Hana family, were dumped on the side of the road after ISIS shot the father dead and burned his son alive. The symbolism should not be lost.In Islam the symbol of dumping a dead body on the side of the road outside a town, in this case the town was al-Arish, is very telling. It means the victims are seen by the murderers an unfit for human burial and instead worthy only of being thrown to the dogs to be mauled and eaten. The victims are seen by the murderers as subhuman. And that is the way ISIS views all Christians, but most of all, the Christians of the Middle East.Many Christians are fleeing the Sinai where these attacks have taken place. They have seen the writing on the wall and heard the promise of future threats. Egyptian President Abdel Fattah Sisi condemned the recent attacks, much in the same way that he condemned the December massacre. But that’s all he’s done – little else has happened and the Christians rightfully fear for their lives.Despite the AP and Reuters coverage of the persecutions the massacres of Christians in the Middle East has barely made a blip on the radar of the Western news media.Sisi is reacting much the way Western media is reacting. The Copts are not a part of the mainstream; they don’t belong. Their tradition, their practice looks nothing like Western Christianity. There are no significant populations and affiliations outside of Egypt to take up the battle cry and defend them. Libya and Sudan have small Coptic communities, but they’re not going to make waves and risk their relative safety to help out in Egypt. Western Catholic and Protestant groups are not connected to these Christians who are part of the Eastern Church, sometimes referred to as the National Churches.That leaves Israel and Jews around the world.Defense of Egypt’s Christian community is not purely selfless. We have, as they say, skin in the game. We must call attention to the plight of the Christians under ISIS and other oppressors in order to make certain that moderate regimes in the region remain stable. Egypt must protect the Christians and destroy ISIS because otherwise ISIS will destabilize the entire country and the region. ISIS is recruiting members to help oppress the Christians.Protecting Christians will protect the region. Ultimately, it will protect Israel, too.The author is a political commentator. He hosts the TV show Thinking Out Loud on JBS TV. Follow him on Twitter @ MicahHalpern.