Editor's Notes: Israel to the rescue

There is a lesson for the Palestinians in Israel's Haiti rescue outreach: If you're in trouble and you're not trying to kill us, there's no one like the Israelis to help you out.

By DAVID HOROVITZ
JANUARY 22, 2010 00:06
israaid 224.88
(photo credit: )
Advertisement
Israel went into action the moment the scale of last Tuesday's earthquake disaster in Haiti began to become clear.
Thatsame day, the IDF dispatched a five-member preliminary team toestablish what assistance Israel could most usefully provide and towork out the logistics for providing it. 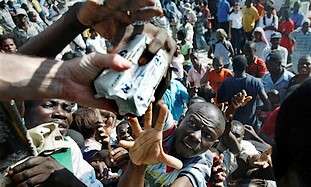 While other countries dithered, countries both nearer and farbetter resourced, Israel utilized the experience born of its previousearthquake rescue missions - to Turkey, Greece, Armenia and Mexico -and got down to business.
By Friday, its field hospital in Port-au-Prince was, literally,operational: Israeli surgeons were saving Haitian lives. Almost a weeklater, it remained the best hospital in the blighted Haitian capital.
That same Friday, the IDF's canine rescue teams werealready searching for survivors in the rubble of a destroyed city, aswas the Zaka rescue unit, which quickly extricated eight students froma collapsed university building. It wasn't only earthquake expertisethat the Israeli experts were calling upon, of course. It was also thebitter experience learned over years of grappling with Palestinianterrorism.
OUR "LIGHT unto the nations" Haitian relief effort encapsulatedmuch of what is best about our country - and encapsulated certain otheraspects of our familiar reality, too.
Itdemonstrated our heartfelt desire to come to the assistance of othersin the time of their greatest need, with no desire or expectation ofreward. Crowds of Haitians cheering "Good job, Israel," over and over,as an Israeli team brought a survivor safely out of the wreckage of aPort-au-Prince building earlier in the week; the joyous, impulsivedecision of Gubilande Jean Michel to name her new-born son "Israel"after doctors at the field hospital had ensured a healthy delivery -these were all the thanks the rescuers could have wished for. That, andthe kind of simple, heartwarming "Shalom"s that our reporter in thedisaster zone, E.B. Solomont, received whenever she mentioned that shewas working for The Jerusalem Post. Shalom. Hello. Peace. One more Hebrew word than Haitians might have been expected to know.
The Israeli mission to Haiti also underlined ourcapacity to think and act fast and effectively - to pull together andsurmount obstacles at a time of crisis. American TV stations reportedthat the US initially sent medical staff with no instruments. More thantwo dozen countries ultimately got involved in the relief effort, butmost spent the most precious first hours and days working on plans tohelp, or running into all kinds of logistical difficulties - includingfinding the means to physically land their rescue planes in thepost-quake chaos at the airport. Meanwhile, the Israeli teams, quietly,efficiently, and with a minimum of fuss, collected their personnel,their equipment and all their other essentials, somehow circumvented orcleared all the obstacles, and went to work.
As this week continued, the prospect of finding survivorsdiminished. But even when local Haitians called out to an IDF crew atone locale on Monday that "they are all dead," the rescue teamsinsistently maintained their search. A senior Israeli medical officialhad acknowledged early in the week that finding survivors as long asfive days after such a disaster was just about possible, and after sixdays almost impossible. But day six came and went, and still the teamscriss-crossed the capital. And they were vindicated, with survivorsstill pulled from the wreckage on day seven.
The US and others will doubtless contribute a great deal morethan Israel can to the long-term process of rebuilding Haiti, but theIsraeli medical efforts will also continue long after the internationalmedia spotlight has moved on. For while the hunt for survivors may bedrawing to a close, the medical needs are far from fully addressed. Asof mid-week, well over 2,000 people had found their way to the fieldhospital. IsraAID/FIRST and Magen David Adom teams were alsooverwhelmed at the scale of the requirements, with the IsraAID teamtreating 700 injured Haitians in the first four days of its work. ManyIsraeli medical personnel expect to be on the ground in Haiti for weeksmore.
THE ISRAELI teams certainly didn't go out seeking glory, but their mission also constituted extraordinary public relations. 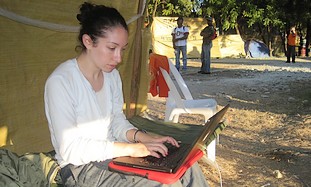 The powers-that-be here had decided that one Israeli newspaper,one Israeli TV station and one Israeli radio station would be chosen,ostensibly by lottery, to send a representative to fly out with theIsraeli rescue teams and distribute text, audio and TV footage fortheir colleagues. To the surprise of nobody at all, the Israelinewspaper that "won" the lottery just happened to be the powerful Yediot Aharonot; to the surprise of nobody at all at the Post,our efforts to explain to the authorities that it might be in Israel'sinterest to have a journalist there who could write and speak English,and tell the story of the Israeli effort to the watchingEnglish-speaking world, fell on deaf ears.
Fortunately, Solomont, our indefatigable New Yorkcorrespondent, got to the scene fast and, although Israeli diplomats inthe neighboring Dominican Republic were less than helpful, Americandiplomats in Haiti helped her out, and she was graciously looked afterby the IDF mission once she had arrived in Port-au-Prince, so no harmwas done to our capacity to report. Officially hosted Yediot Aharonot,meanwhile, decided that a lawsuit filed by a former employee of SarahNetanyahu merited as much coverage on the front page of its newspaperlast weekend as the deaths of tens of thousands of Haitians and theefforts of Israeli rescue to save and treat the survivors.
Fortunately, too, the sheer efficiency and expertise of theIsraelis, flying in from 16 hours away, when contrasted with therelatively slow response and meager capabilities of some other nations,proved a news story that international outlets happened upon bythemselves. NBC's Nightly News ran a three-minute feature onthe Israeli field hospital, reported by its chief medical correspondentNancy Snyderman, MD, who termed the Israeli field hospital "the modelof medical disaster response." Snyderman highlighted its vitalneo-natal intensive-care unit - "that can handle Haiti's mostvulnerable" - and showed a young father there keeping watch on his tinybaby, the sole survivor of triplets.
CBS branded the Israeli hospital the "RollsRoyce" of medical installations in Haiti. A BBC report hailed theIsraeli rescue efforts. ABC sent a letter of thanks after the Israelihospital delivered a baby to a woman whom its own reporter, a doctor,had first tried to help himself.
Mostawestruck of all was Elizabeth Cohen, a CNN correspondent inPort-au-Prince. On Monday, Cohen came across American doctors atanother, hopelessly ill-equipped hospital and heard directly from Dr.Jennifer Furin, from Harvard Medical School, speaking on camera there,that her patients were dying "a slow death from their rotting fleshbecause the infections are out of control and they need surgery."
"The situation is beyond desperate at this point," said Furin."Patients were so thankful to have lived through the quake and nowthey're slowly dying in these hospitals."
Added Furin: "No one except the Israeli hospital has taken any of our patients."
Intrigued, Cohen went to check out the IDF field hospital for herself. "I'm just amazed atwhat's here. This is like another world compared to the otherhospital," she marveled as she walked from Israeli tent to tent. "MyGod, they have machines here! They have actual operating rooms! It'sjust amazing!"
Back with Dr. Furin, Cohen asked: "So the Israelis have set upa field hospital. Have the Americans, has the American government, setup a field hospital?"
Furin: "Currently, not yet."
Cohen: "The Israelis came from the other side of the world?!"
Furin, spreading her hands in bafflement: "It's a frustrating thing that I really can't explain."
Another American doctor chipped in: "It makes you almost embarrassed to be an American."
JUST AS there were those who rose up to criticize America for apurported heavy-handed takeover of the Haiti relief effort, there weresome, too, who turned on Israel for its response to the disaster.
A few critics within Israel asserted that we had, in the wordsof one Ynet Internet columnist, "raced to be first" simply to garner PRpoints, and, "like Everest climbers," had placed our "national flag atthe peak to prove that the site has been conquered," but that ourrescue effort had been of little real value.
Considerably more perniciously, one T. West from Seattle posteda video on YouTube reiterating the lie of Israeli organ harvesting, andurging Haitians to beware that they not fall victim, which was quicklypicked up by anti-Israel Web sites.
Here and abroad, predictably, there were also those who accusedIsrael of hypocrisy over the disaster, claiming that we rush across theworld to save some people while oppressing others on our own doorstep.
This, too, of course, is all part of the familiar Israeli reality - of charge, and counter-charge, and distortion.
We can argue endlessly, and do, about the policies we adopt whengrappling with the Palestinians. But there is one thing that our Haitirescue outreach made emphatically clear, and that the Palestiniansmight want to ponder: If you're in trouble and you're not trying to kill us, there's no one like the Israelis to help you out.
Advertisement
Subscribe for our daily newsletter