Into the Fray: Sovereignty? Yes, but beware of annexing Area C

Partial annexation of Judea-Samaria will solve none of the problems Israel faces today, and exacerbate many

As we know, Area C includes the entire Jewish population and along with it a small number of about one hundred thousand Arabs.

There is nothing more deceptive than an obvious fact.

As readers will recall, last week I mentioned that a new edition of the political journal Sovereignty was recently published by Women in Green and the Forum for Sovereignty. The journal carried various ideas for alternatives to the two-state paradigm. Among them was my proposal for a tripartite “Humanitarian Paradigm,” the details of which I have elaborated on here in numerous columns.

The journal is certainly an eminently laudable – and long overdue – initiative, in that it highlights the need for concerted intellectual endeavor to break the stifling stranglehold that the two-state paradigm has had on the political discourse since the early 1990s.

Lamentably, however, it has been a platform for several suggestions that are likely to be no less detrimental than the two-state principle they aspire to supplant. 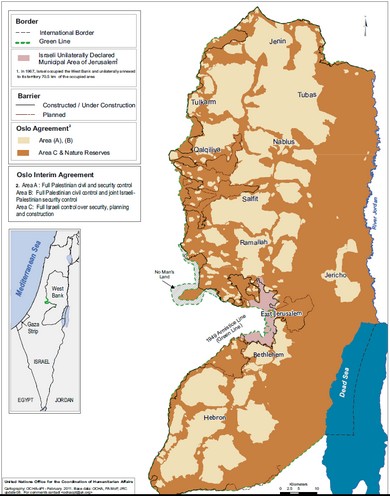 Map of the West Bank.
Last week, I focused attention on the grave dangers of policies which advocate annexing the entire area of Judea-Samaria and conferring permanent residence – and subsequent citizenship – on Palestinian-Arabs living there.This week, I turn to the idea of partial annexation – which typically entails extending Israeli sovereignty over what has been designated as Area C. This comprises about 60 percent of Judea-Samaria, in which all the Jewish communities are located, and has only a very sparse Arab population. Perhaps the most prominent advocate of this approach has been Bayit Yehudi leader Naftali Bennett.In the Sovereignty journal, a version of this idea was taken up by the Likud’s Tzipi Hotovely, who correctly cautioned: “The drastic step of immediate citizenship for a million and a half Palestinians would be irresponsible and to think of doing such a thing is not serious.”Instead, she suggests that Israeli sovereignty should be extended over Judea-Samaria in a “step-by-step” process, commencing with annexation of Area C and offering citizenship to its Palestinian-Arab residents (which she estimated at about hundred thousand).According to Hotovely, this step “will be a sort of test case for the future,” presumably for annexation of the remainder of Judea-Samaria (Areas A and B) and the naturalization of the Palestinian-Arab population resident there (over 90% of the total).Divine providence, not political rationale

I found much of Hotovely’s prescription, as presented in the Sovereignty journal, a little difficult to follow.

Considerable portions of it seemed to merge wishful thinking with the self-contradictory.Others, while essentially sound, have little to do with the issue of sovereignty in Judea-Samaria, and should be pursued, irrespective of what takes place across the pre-1967 Green Line – such as introducing legislation to strengthen the Jewish character of the state, reining in the freedom of anti-Zionist Arab MKs to engage in inflammatory incitement, and “change[ing] the rules of the game” with regard to the license they are given by “Bagatz (the High Court of Justice)” for their seditious conduct.As essential as these measures are, they have, as noted, scant relevance for the desired/ required political template that should be applied to Judea-Samaria.However, when it comes to this matter, Hotovely’s arguments are – to be charitable – tenuous, and seem to flow more from a belief in divine providence rather than any hardnosed political analysis. She ends the Sovereignty piece with these words: “We must restore our confidence that if the Holy One, Blessed Be He, gave us parts of this Land, he also gave us the strength to be its sovereigns.”While I would be the last person to dismiss the role of faith as an essential ingredient in the Zionist endeavor, and I endorse her invoking the need for inner spiritual strength, I confess that, as a somewhat un-pious person myself, I have little expertise in the realm of religion. Nevertheless, I feel a little uneasy at basing the feasibility of political prescriptions largely on the basis of religious belief, and sense that many, in Israel and abroad, would find such arguments unpersuasive.Slower, not smarter

Examination of some of the measures that Hotovely envisions shows that they would require an ample measure of heavenly intervention for their implementation.

She is cited as saying “We must begin a gradual process of 25 years under the heading of ‘annexation-naturalization,’” presumably in Areas A and B and which, presumably, would take place after annexation of Area C and naturalization of the estimated 100,000 Palestinian-Arabs there – which it will be recalled was supposed to be “a sort of test case for the future.”Clearly, without divine intervention, it would be wildly unrealistic to expect to put the world on hold for a quarter century while the Zionists deign to adjudicate whether the Palestinians have behaved themselves well enough to merit political enfranchisement.This formula raises several trenchant questions: Suppose the “test case” with the 100,000 Area C Arab residents is unsuccessful, in the sense that they either reject citizenship, or accept it but engage in subsequent subversive activity? How is Israel then to proceed with the Arab population in Areas A and B? (More on this thorny conundrum a little later.) Or supposed said test case did work, according to some yet-to-be-stipulated criterion, and the “phased annexation-naturalization” was initiated, but failed. Or worse, suppose it failed partially, with some Palestinians complying with, and others defying Israeli authority? How would Israel respond? Would it confer citizenship only on “obedient” Arabs and deny it to “disobedient” ones? And what would be the yard stick for acceptable “obedience”...? Phased annexation-naturalization? Really? It might be slower than immediate citizenship, but not much smarter.More trenchant questions

Hotovely makes the realistic assessment: “I start with the assumption that this is a hostile population whose abiding dream is not to be part of the Jewish Zionist state.”

This is undoubtedly true, but what does this mean for the 25-year transition period in the un-annexed Area A and B, where the “phased annexation-naturalization” process is supposed to take place? How, and by whose hand, is the hostility to “Jewish Zionist state” to be reduced to a level that will allow the eventual naturalization of current “hostiles”? Is it assumed that the Palestinian Authority will continue to function? This is of course highly implausible (see below), but even if it does, what reason is there to expect any reduction in hostility, as the PA itself is a prime generator of it? Or if the PA is to be dismantled – or dissolved by its own hand, what then? Will Israel once again resume responsibility for the lives of “a hostile population whose abiding dream is not to be part of the Jewish Zionist state.”Whichever way you slice it, Hotovely’s proposal seems poorly thought-out, with none of the major decision variables determining success or failure under Israel’s control – and the deck stacked against it.Seductively plausible but fatally flawed

But putting aside the defects of the specifics of Hotovely’s proposal, the general concept of partial annexation of Judea-Samaria and confining extension of Israeli sovereignty to Area C is an ill-considered initiative which is not only likely to prove unproductive, but to a great degree counter-productive.

It is a fatally flawed formula in that – even if it were fully implemented – it would alleviate virtually none of the grave problems confronting Israel today on the Palestinians front, whether in the diplomatic, security or administrative spheres. It would, however, almost inevitably exacerbate many of them.One of the reasons that this approach is so hazardous is that, superficially, it appears so deceptively plausible. The formula seems so seductively simple. Maximum territory, minimum Arabs. What could possibly be the problem – especially as any accusations of racism could be countered by offering citizenship to a manageable number of Arab inhabitants? Ah, if only life were that simple.Delineating and securing sovereign territory

For a country’s declaration of sovereignty over a given territory to have any significance, it must be able to demarcate the frontiers of that territory and secure them against infiltration or attack.

However, a cursory glance at any map of the region will reveal how impractical such partial annexation would be for Israel, implying borders for the country’s sovereign territory that are impossibly torturous and lengthy. For like Areas A and B, Area C is a crazy-quilted patchwork of enclaves, corridors and access roads, with an outer contour well in excess of 1,000 km.But if Israel does not demarcate and secure the boundaries of its sovereign territory, how would it prevent the influx of residents from Areas A and B into it – with all the attendant security and demographic ramifications – totally undermining the “neat” rationale of annexing Area C.Status of Areas A&B: Political cul de sac?

Apart from the insurmountable problem of demarcating and securing Israel’s sovereign territory, there remains the status of the remaining Areas A and B – in which over 90% of the Palestinian-Arab population would reside, on less than 40% of the territory, spread over a myriad of disconnected enclaves, scattered from Hebron in the south to Jenin in the north, from Jericho in the east to Kalkilya in the west.

What would be their long-term political fate? What would be Israel’s message to the world on this matter? It is clearly impossible to forge these scattered blotches of territory into any sustainable or manageable entity, making the accusations of ethnically delineated and discriminatory Bantustans (or rather Arabstans) far more difficult to repudiate.Moreover, who would regulate the lives of those living there, and how? A political cul de sac seems inevitable.Clearly, it is unthinkable that the current PA leadership, or any conceivable alternative, would accept responsibility for the administration of such an emasculated and fractured entity.Balkanization of Land of Israel?

But then what? If, by annexing Area C, Israel permanently forgoes sovereignty in Areas A and B, what is the rationale for a long-term presence of the Israeli military there? Alternatively, what would be the envisioned justification for withdrawing it? If it does not forgo such sovereignty, we revert to the question of: What is to be the status of the inhabitants?

So if, as I wrote last week, offering citizenship to the Arab residents of Judea-Samaria would lead to Lebanonization of the STATE of Israel (ethnic strife within a single political entity), partial annexation – i.e. annexation of Area C alone – is liable lead to Balkanization of the LAND of Israel (the fracturing of a single entity into a number of smaller potentially rivalrous ones).

Neither option – Lebanonization or Balkanization – appear palatable, plausible or persuasive as viable options to the two-state-paradigm.Same “political pain”

As we see, partial annexation would solve little and exacerbate much.

The diplomatic outrage – the political pain – it would precipitate would be no less than if Israel were to annex the entire “West Bank” – as I have suggested previously on numerous occasions – and provide individual Palestinian breadwinners with a tangible opportunity for a better future for themselves and their families elsewhere.So why pay full price for half the “goods”? To facilitate this “Humanitarian Paradigm,” the government must undertake three resolute measures:

(a) launch a massive public diplomacy offensive (I have suggested an annual budget of a billion dollars) to expose the mendacity of the Palestinian narrative and discredit the claim for Palestinian statehood;

(b) desist from economically propping up the nonviable Palestinian economy and let the Palestinian Authority collapse;

(c) offer individual Palestinians a way to extricate themselves from the consequences of such collapse, inflicted on them by the cruel corrupt cliques that have led them astray for decades.

This to me seems the only viable Zionist alternative to the two-state disaster.Martin Sherman (www.martinsherman.net) is the founder and executive director of the Israel Institute for Strategic Studies. (www.strategic-israel.org)
Advertisement
Hot Opinion