Into the fray: The magnate and the mullah, A Friedman fantasy

Tom Friedman’s anti-Adelson diatribe shows how intellectually corrupted the discourse on the Israel-Palestinian issue has become. 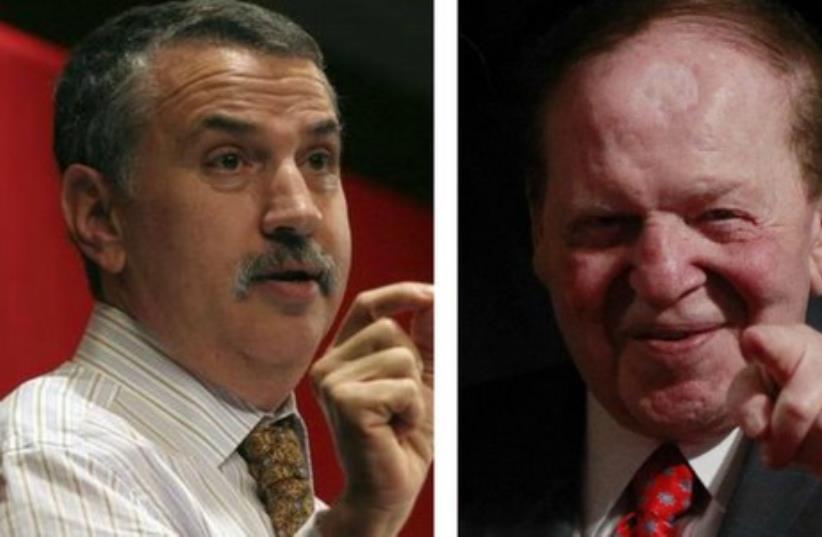 New York Times columnist Thomas Friedman (L) and US casino magnate Sheldon Adelson.
(photo credit: REUTERS)
Advertisement
Truth be told, Tom Friedman can be a pretty astute and articulate journalist – except when he writes about Israel.Then his work degenerates from the astute to the inane and from the articulate to the incoherent.But even by his usual misleading sub-standards, his recent piece, “Sheldon: Iran’s Best Friend” (The New York Times, April 5), was a doozy.Full Disclosure

In it he makes a puerile attempt to draw a parallel between the danger that the rabid anti-Israel mullah Ali Khamenei and the avid pro-Israel magnate Sheldon Adelson pose for the Jewish state.Full disclosure: In the past I have applied to Adelson’s Foundation for financial support for my own nonprofit entity – The Israel Institute for Strategic Studies. But sadly, I have not received a bent penny. So I have very little allegiance to Adelson that might induce me to write in his defense against Friedman’s frivolous attack, although malicious souls will doubtless imply that I do. Quite the opposite is true. I have a completely different rationale for penning this week’s column. My reason for doing so is to use Friedman’s article to show how intellectually corrupted the discourse on the Israel-Palestinian issue has become, and how self-contradictory and disingenuous the increasingly desperate arguments of two-state proponents have become.These elements are all starkly illustrated in Friedman’s anti-Sheldon rant and vividly underscore just how bankrupt the two-staters’ case has become.‘Toxic tycoons’? Accordingly, I do not want to dwell too long on Friedman’s childish chagrin that Adelson is using his self-amassed fortune to advance causes he believes in, and to support politicians he feels would be likely to promote them.But some brief reference is unavoidable.Friedman alleges: “Adelson personifies everything that is poisoning our democracy and Israel’s today — swaggering oligarchs, using huge sums of money to try to bend each system to their will.”But after even the most cursory perusal of his anti-Sheldon diatribe, any fair-minded reader might be excused for concluding that what really bothers Friedman is not the toxicity of the democratic system in the US or Israel, nor the power plutocrats per se have in affecting the outcomes it produces.Indeed, I have a strong suspicion that if Adelson were funding the same political causes and/or organizations as, say, George Soros, he would not have come in for censure.The same is probably true regarding Warren Buffett, Haim Saban, S. Daniel Abraham or any one of the almost 170 billionaire benefactors of the US Democratic Party.In any event, there is not a hint of disapproval from Friedman regarding the influence brought (or bought) to bear on the political process from fat-cats who happen to share his political predilections in general, and on the Israel-Palestinian issue in particular.I would bet long odds that if Adelson was pouring money into the coffers of the Democratic Party or J Street or the New Israel Fund, that would be just fine and dandy with Tom.Friedman’s true focus is not ensuring the expression of vox populi, uncorrupted and undistorted by big bucks protecting personal interests or promoting pet projects of munificent magnates.

Hidden agenda poorly concealed Instead, his real agenda is the preservation of the viability of the two-state paradigm that is rapidly descending into well-deserved political irrelevance. I, for one, have little doubt that Friedman would have few qualms in endorsing subversion of the stand of the democratic majority if it clearly entailed jettisoning the two-state approach.After all, far more funds have been channeled in to institutionalized instruments of influence that blatantly promote Friedmanesque agendas regarding the Mideast conflict than into those promoting any opposing perspectives. This has elicited little condemnation from him as to their noxious effect on Israeli or US democracy.Friedman finds nothing objectionable in the massive funding of organizations not only heavily biased toward Democratic Party perspectives on international affairs in general, but toward support for the two-state solution, in particular – such as the S. Daniel Abraham Center for Middle East Peace in Washington, its Israel counterpart, the S. Daniel Abraham Center for Strategic Dialogue in Netanya, and the Saban Center for Middle East Policy, also in Washington.Then of course there is the Institute for National Security Studies (INSS) in Tel Aviv, funded by Australian billionaire Frank Lowy, whose flagship project is the perversely paradoxical endeavor to attain “peace without partners” – i.e., to bring about a two-state solution by re-implementation of the failed formula of unilateral withdrawal, irrespective of the outcome of any negotiations with the Palestinians.

Hypocritical double standardsI know of no comparable countervailing institution, with anything remotely approaching the same financial resources, that overtly opposes the two-state formula and the disproven doctrine/dogma of political appeasement and territorial concession on which it is based.None of this, however, apparently arouses concern in Friedman as to the effect of “swaggering [albeit like-minded] oligarchs, using huge sums of money to try to bend each system to their will.”Apparently, the litmus test for being a “swaggering oligarch” trying fiendishly to “bend the system to his/her will” is whether he/she is a Republican and/or opposed to the failed two-state formula. If you are a Democrat and/or endorse the two-state principle, then you neither “swagger” nor use your wealth to “bend the system to your will.”No, if you are a Democrat two-stater you are merely a benign benefactor facilitating the pursuit of progressive, humanistic and democratic values – promoting the establishment of yet another Muslim-majority tyranny.Hypocritical double standards, anyone?