No holds barred: Israel must not make the same mistake twice

Peace came to Europe and the Far East only after the greatest generation totally destroyed Germany and Japan’s capacity to make war. 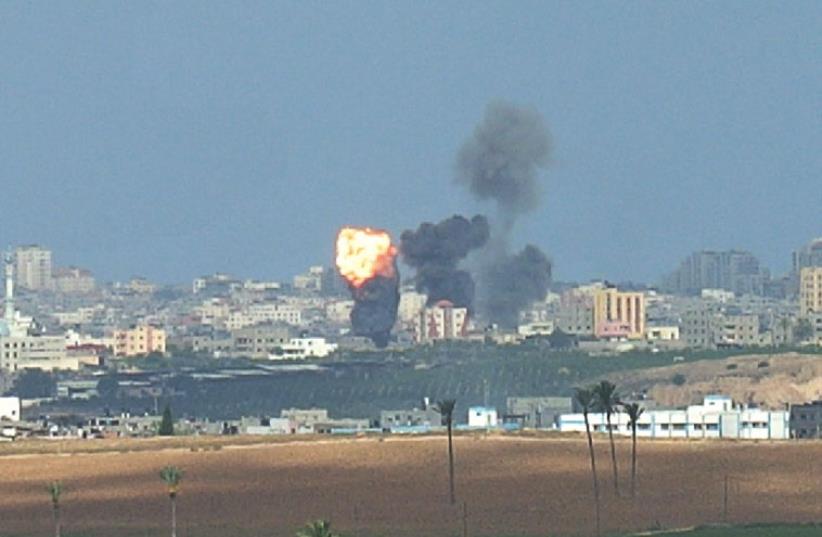 Explosion in Gaza Strip Beit Hanoun
(photo credit: SETH J. FRANTZMAN)
Advertisement
Let’s state what is painfully obvious by now: Israel’s unilateral withdrawal from Gaza in 2005 was a catastrophe. As Israel stands poised to invade Gaza for a third time since that tragic mistake, it must accept that ceding land to those hell-bent on your destruction is a guarantee that your citizens will be murdered. Hamas has turned Gaza into a giant missile-launching factory. It will not rest until Israel is completely destroyed. And they have staying power. Hamas knows it will take many generations – at least – to finish off Israel. But its passion in this quest, fueled by religious fanaticism, remains unabated.And while Hamas fires rockets against Israeli cities, President Barack Obama calls for restraint. If a single rocket fell on Corpus Cristi, Texas, launched by one of the powerful drug cartels on the Mexican border, it would precipitate a full-scale military response from the United States. Even as we speak President Obama is, rightly, firing missiles from drones at terrorists in Pakistan and elsewhere intent on murdering Americans.Why is it only Israel that should show restraint, which in effect means allowing rockets to hit its cities? I watched Ringo Starr on CNN last night. On his 74th birthday, he called on everyone to lift the two fingers of peace to promote “peace and love” as a global theme. It’s warm and fuzzy and it sounds nice, but will accomplish absolutely nothing. Peace does not come about when rock stars give moving speeches about love, important as those may be. Peace come about when just and righteous militaries, controlled by law-abiding democracies, dismantle the terror apparatus of those who wage war.Period.Peace came to Europe and the Far East only after the greatest generation totally destroyed Germany and Japan’s capacity to make war. There has been peace in both areas in the 70 years since. And peace will only come to Israel when it neutralizes the Islamic terror organizations on its borders committed to its destruction.Now in Gaza Israel has been reduced to “mowing operations,” as described in The New York Times, where it goes in, every few years, losing soldiers, to partially dismantle the terror apparatus and rockets assembled in their tens of thousands by Hamas. This situation may be irreversible and speaks to the ruinous decision made by Ariel Sharon and Ehud Olmert, the latter currently on his way to prison, to withdraw from Gaza without getting a single thing in return, surely one of the great foreign policy blunders of any government in modern times.But it’s a lesson relevant to the current American pressure on Israel to withdraw from the West Bank, which would only lead to a non-stop two-front terror war against the Jewish state.At the 40th anniversary of D-Day it’s worth remembering that Hitler’s generals – some of whom were among the greatest military commanders of all time, like Rommel and Guderian – came to him with a single, emphatic request.Whatever you do, do not give us a twofront war as we had in the First World War, after the failure of the von Schlieffen plan and the stalemate on the Western Front. Of course Hitler, megalomaniacal arch-murderer that he was, always knew better, and launched Operation Barbarossa and the invasion of the Soviet Union, ultimately bringing about the total destruction of his country.That of course was a good thing, as Germany had become the most evil entity in the history of the world. But we can learn from evil and turn it to good. What Hitler most wished for was the utter annihilation of the Jewish people.He failed because he disregarded the advice of his generals and allowed himself to be invaded from two sides.Now, the inheritors of Hitler’s dreams of annihilating the Jews – Hamas, Hezbollah, Islamic Jihad and their patron Iran – are seeking the same: a two-front war against Israel leading to its destruction.Israel cannot make the same mistake twice. This time it may not survive so catastrophic a blunder.And what is certain is that the West Bank will turn into exactly what Gaza has become: a terrorist version of NASA, a rocket launching pad with the sole purpose of killing as many Jews as possible.The author is founder of This World: The Values Network, the foremost organization influencing politics, media and culture with Jewish values. He has just published Kosher Lust: Love is Not the Answer.Follow him on Twitter @RabbiShmuley.