Was the Koran behind such evil, or was it hijacked, like the planes-turned-bombs? Were all Muslims to be held accountable for the act of a few radicals, or would they join in the fight to root out their bad seeds? 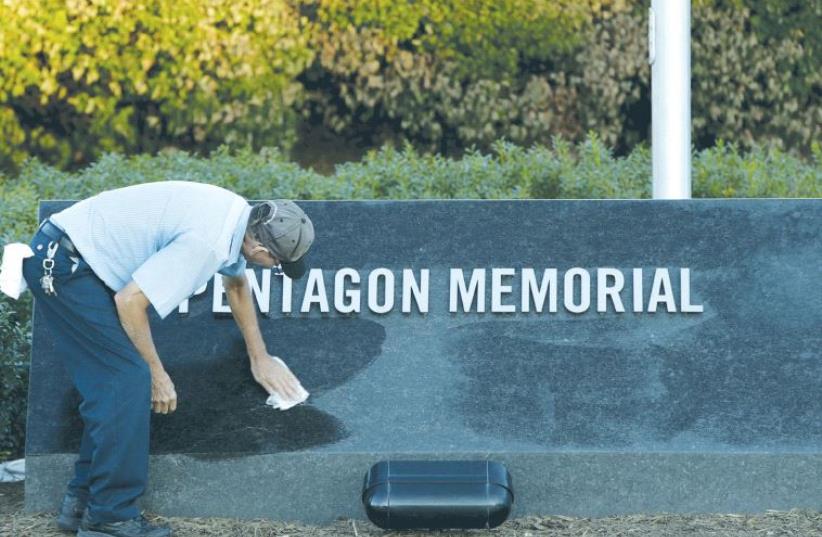 A MAINTENANCE worker wipes off early morning dew at the Pentagon 9/11 Memorial in Washington DC. (
(photo credit: REUTERS)
Advertisement
Sunday marked the 15th anniversary of September 11, 2001 terrorist attacks in the United States. On that fateful day, the “land of the free and home of the brave” was brutally violated on its own soil. Americans, previously insulated from war and terrorism within the confines of their country’s borders, were suddenly faced with the realization that their sense of security had been false for quite some time.This shock was not exclusive to citizens of the United States. The entire world watched the unfathomable footage of the collapse of the Twin Towers from television sets at home and in shop windows with amazement. Even those who celebrated the humiliation of the world’s only superpower at the hands of rogue actors were incredulous.Indeed, for that moment in time, there was universal global consensus that a seismic shift had occurred in one fell swoop, and that life as we knew it would never be the same again. It was like witnessing a chapter – or prediction – of the Bible.But it was a very different book that became the focus of heated public debate, even before the dust in lower Manhattan had settled.Was the Koran behind such evil, or was it hijacked, like the planes-turned-bombs? Were all Muslims to be held accountable for the act of a few radicals, or would they join in the fight to root out their bad seeds? Israelis were just as horrified as everyone else by the scale and scope of the mass murder. We also understood the significance of the targets of the meticulously planned atrocity – key symbols of American financial and military prowess. But we were not surprised by the event itself. Nor did we concern ourselves with the extent to which the tenets of Islam were to blame. We were in the throes of a suicide-bombing war, which had been launched against us a year earlier by the Palestinian Authority. The only casus belli for what came to be called the second intifada was our utter and repeated capitulation to the demands of arch-terrorist PLO chief Yasser Arafat. The more we groveled, the more empowered became the Nobel Peace Prize laureate, whose aim all along was to annihilate the Jewish state.Yes, we Israelis were spending our days trying to calculate which buses might blow up on our way to school or work; which café, restaurant or discotheque was too risky to frequent; and what packages, backpacks and sidelong glances were suspicious. As heads were literally rolling in seas of Jewish blood on the streets, our concern was not with the Koran, but with our leaders’ ability to put a stop to the carnage perpetrated by enemies in our midst.We did not care whether Islam had been “hijacked.” We just wanted to eradicate the phenomenon – by any means necessary.Those naïve enough to have believed that the way to do this was through diplomacy were provided with a wake-up call courtesy of Palestinians wearing and detonating explosive belts. The rest of us already knew that, in the language of Fatah and Hamas, “peace” is a codename for “death and destruction.”In the 15 that have ensued, much has changed and even more has stayed the same. Most rational people today are unable to escape the conclusion that understanding the “gripes” of Islamic radicals does nothing but feed their bloodlust. Even willfully ignorant Europeans are being forced to remove their blindfolds.Nevertheless, the phenomenon is spreading, not receding.Which brings us back to America.In the past eight years, the administration in Washington – sitting in the very neighborhood of the 9/11 Pentagon bombing – has signaled to Islamists who believe it is their political and religious duty to subjugate, kill or maim all infidel Jews, Christians and Muslims that their path will not be hindered.US President Barack Obama even put this in writing last year, when he signed the Joint Comprehensive Plan of Action – the Iran nuclear deal. With each passing day, new details of the agreement itself and of off-the-record addenda emerge to indicate just how completely and purposefully the White House bowed down to the ayatollahs in Tehran. In so doing, Obama gave the regime the bright green light to continue to serve as the greatest state sponsor of global terrorism – but with deadlier weapons of mass destruction.Americans now can lie awake at night knowing that their tax dollars are paying for the slaughter of innocent people, just like those who went to work on the morning of 9/11 and never returned.What a way to come full circle on a crystal anniversary.The writer is the managing editor of The Algemeiner.