Perhaps Turkey may even play a bigger and more significant role now. 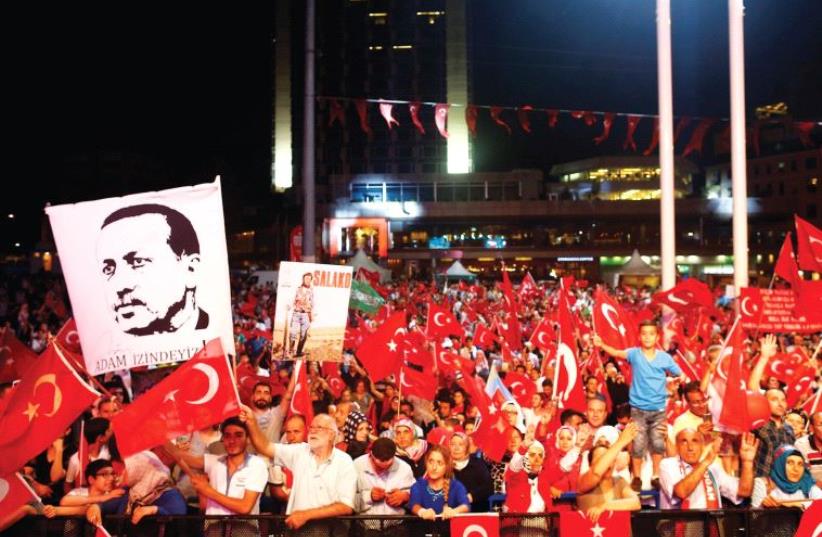 SUPPORTERS OF Turkish President Recep Tayyip Erdogan wave national flags in Taksim Square
(photo credit: REUTERS)
Advertisement
Luckily for Israel, the reconciliation agreement with Ankara, which ended six years of bitter relations and hostility, was signed and implemented months before the Turkish referendum. Otherwise, Israel and the Jews could have been bashed and targeted by the big mouth of President Recep Tayyip Erdogan, too.Like any other populist demagogue who aspires to consolidate his power at the expense of democratic institutes – Berlusconi, Putin, Trump and Netanyahu – Erdogan increased the attacks against his enemies – the Netherlands, Germany, the US and others, real or imagined – in the weeks leading up to the crucial vote.Israel could also have been a perfect target for the Turkish leader.He’s attacked it before. He walked out in the middle of a public discussion with then president Shimon Peres during the Economic Forum in Davos. He accused Israel of genocide against Palestinians in general and in the Gaza Strip in particular.He even occasionally used strong antisemitic innuendos about the Jews.But since July 2016, when the two countries signed an agreement to normalize their relations and improve it, Israel has been spared Erdogan’s wrath.The thaw is happening slowly, based on common interests. Both governments are economically cooperating and militarily supporting the Barzani faction of the Iraqi Kurds. The two sides want to weaken Iran and its influence in the region. They have some shared interests in Syria, although they don’t see eye-to-eye on all matters concerning the civil war there.Their air forces have bombed Syria, and both countries wish to create buffer zones on their borders with Syria. They support some rebel groups but differ drastically in their opinions regarding Bashar Assad. Turkey demands he be toppled, while Israel has not yet formulated its position and seems to be neutral about his future.The marginal – and contested – victory of Erdogan is mixed news for Israel. It may make him more self-confident, brazen and arrogant, and thus even more unexpected.Some of these traits may in fact work against Israel. But the slim victory is also a sign that his nation is highly divided, and the accusations that the referendum was fraudulent make him more isolated abroad. He may need to rely even more on Israel as a regional anchor and conduit to fix sour relations with nations where Israel has or is considered to have some leverage and influence, such as with the US.If this is the road to be taken, it means that diplomatic, military and intelligence ties between the two countries will be further improved. Perhaps Turkey may even play a bigger and more significant role in brokering a prisoner’s swap between Hamas and Israel.