Confronting J Street’s candidates: How are you ‘pro-Israel’?

This fraudulent “pro-Israel” certification has been called out even by those not shy about disagreeing with particular Israeli policies, such as Professor Alan Dershowitz. 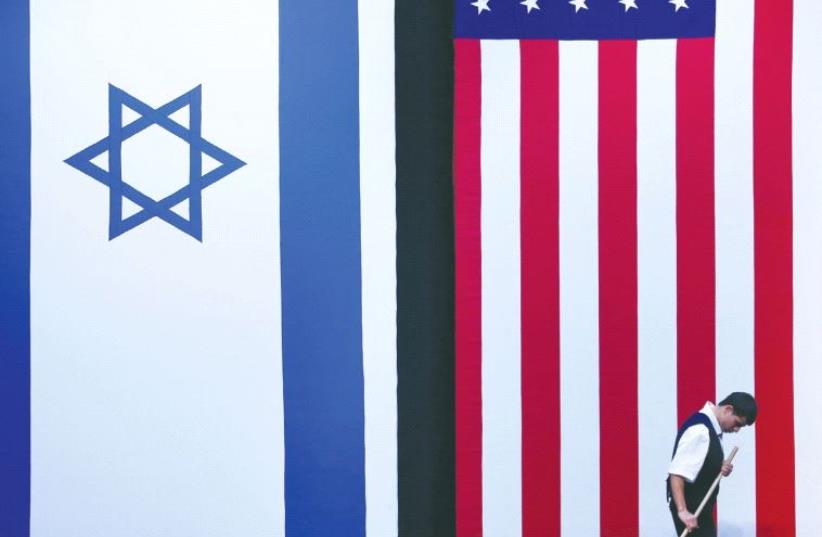 Flags of the United States and Israel
(photo credit: REUTERS)
Advertisement
What does it mean in this US election when a candidate claims “pro-Israel” status? For candidates so labeled and endorsed by J Street, that is a pointed question. J Street advocates policies overwhelmingly considered within Israel as self-defeating and suicidal; thus, its endorsement should raise red flags among Israel-sympathetic voters. It’s time we look behind the label and ask each candidate: What do you mean, “pro-Israel”? Why did J Street endorse you, and why did you accept?J Street’s “pro-Israel, pro-peace” motto is exquisitely Orwellian. J Street is pro-Israel like the UN is pro-Israel: each pays lip-service to Israel’s legitimacy while undermining it at every turn. Any candidate endorsed by the UN as “pro-Israel” would be equally suspect.J Street was launched with, and still receives, substantial funding from anti-Zionist George Soros – not to mention donations from pro-Iran organizations; its conferences feature speakers who are pro-Boycott, Divestment and Sanctions and anti-existence of a Jewish state – in fact, J Street itself is careful not to call Israel a Jewish state; co-founder Daniel Levy described Israel’s very creation as “an act that was wrong.” J Street lobbies in favor of viciously anti-Israel UN resolutions, including the notorious 2016 Security Council Resolution 2334, which declared all disputed land controlled by Israel since 1967 – including the Old City of Jerusalem – to be occupied Palestinian land; it finds moral equivalency between Israel and Hamas, and has blamed Israeli policies for the thousands of Gaza rockets Hamas fired at Israel’s population.Needless to say, J Street vehemently opposed the US recognition of Jerusalem as Israel’s capital and move of America’s embassy to Jerusalem – actions not only consistent with bipartisan-supported US law, but which were applauded in Israel by all mainstream parties, both right- and left-wing. J Street obnoxiously questions the motives of anyone expressing disagreement with its far-left platform. It has particular scorn for Christian Zionists – Israel’s most reliable friends in the world, dismissing them as “extremists” who “hold American policy hostage,” and maintaining that Christian support for Israel is just a ruse to instigate having Jews killed and “goading Arabs into war” as a “catalyst for Armageddon.” J Street’s strength comes from bestowing the political cover of a phony “pro-Israel” label on politicians who advocate measures weakening Israel. If an organization slaps a “kosher” label on pork, perhaps “kosher” means something different than expected; but that label hardly makes the pork kosher as commonly understood. In fact, it calls into question everything else the organization certifies kosher. Currently, more than half of congressional Democrats carry J Street’s “pro-Israel” kosher certification.This fraudulent “pro-Israel” certification has been called out even by those not shy about disagreeing with particular Israeli policies, such as Professor Alan Dershowitz. He has called J Street “one of the most virulent anti-Israel organizations in the history of Zionism and Judaism,” and “has done more damage to Israel than any other American organization.” Tellingly, Israel’s US ambassador refuses to even meet with J Street; Mahmoud Abbas, however, just met in Ramallah with J Street’s leadership, and thanked the group for its lobbying efforts.J Street’s “pro-Israel” candidates in 2016 included: Rep. Keith Ellison, long-involved with Louis Farrakhan’s Nation of Islam, and critic of “Israeli control” of American foreign policy – but to J Street, a “true friend of the Jewish people;” and Rep. Hank Johnson, who claimed “Jewish people” routinely steal Palestinian property, and compared Jewish residents of the West Bank to “termites.”
As just two of many examples this year, J Street endorsed “pro-Israel” Scott Wallace, whose foundation granted hundreds of thousands of dollars to organizations that support BDS, including to the odious “Jewish Voice for Peace;” and Leslie Cockburn, who authored (and never disavowed) a book alleging a conspiracy of Jewish control over global institutions and Israeli manipulation behind misguided US foreign policy (how original). Her co-author husband Andrew maintains that Israel is allied with ISIS. Her work is favorably cited by David Duke. J Street’s verdict: she’s “pro-Israel.” Notably absent from J Street’s endorsements: traditionally reliable pro-Israel Democrats, like party leaders Nancy Pelosi, Ben Cardin and Steny Hoyer. Anyone may disagree honorably with particular policies of Israel’s government. But J Street overwhelmingly pushes policies which the vast majority of Israeli citizens – both left and right – consider existentially threatening to their country, lives and safety. To call such policies “pro-Israel” is disingenuous; to coerce Israel’s democracy through outside pressure to adopt those policies is anti-Zionist.For those truly concerned about embattled Israel and its people, and respectful of democratic choices made by citizens who must live (or, too often, die) with the consequences of misguided policies, J Street’s seal of approval is nothing to be proud of; rather, it should be seen as a black mark on the “pro-Israel” credentials of all 138 candidates J Street endorses. Voters and media should challenge each such candidate to define what their embrace of the “pro-Israel” label actually means; then, either defend accepting J Street’s endorsement, or unequivocally renounce it. Let’s see how “pro-Israel” they really are.

The author is an American attorney and political commentator living in Israel. He serves as Counsel to Republicans Overseas Israel.
Advertisement
Subscribe for our daily newsletter