"We are observing in action the American system of checks and balances, and separation of powers." 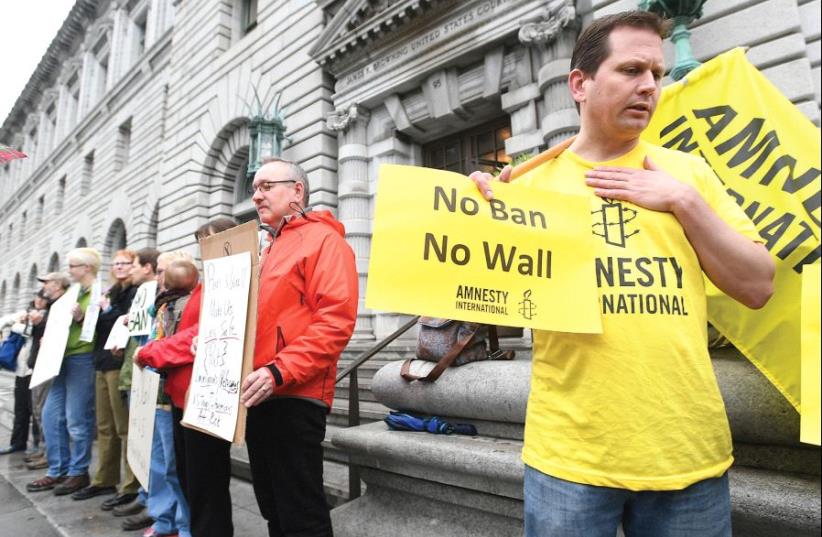 PROTESTERS LINE UP outside the 9th US Circuit Court of Appeals courthouse in San Francisco on Tuesday after the court heard arguments regarding President Donald Trump’s temporary travel ban on people from seven Muslim-majority countries.
(photo credit: REUTERS)
Advertisement
No one can predict how the legal challenges to the Trump executive order on immigration will turn out, but the courts will probably get the last word. It is important to note, however, that US President Donald Trump has thus far avoided a constitutional crisis by appealing, rather than defying, an overbroad injunction against his visa executive order issued by a federal judge in Washington state. A panel of the 9th Circuit Court of Appeals refused to rescind the injunction on an emergency basis, thus keeping the nationwide injunction in effect, at least until the court considers briefs from both sides. Another federal judge in Massachusetts rendered a decision refusing to renew a similar injunction, and thus allowing the visa restrictions to be implemented.In light of these conflicting rulings, the president could have said that he was going to follow the one he and his lawyers believed was correct. Had he done so, the judge in Washington might well have held the president in contempt of court, thus creating a constitutional crisis between co-equal branches of our government.Instead, Trump ordered his Justice Department immediately to appeal what he characterized as the “ridiculous” opinion of “this so-called judge,” as Trump characterized Justice James Robart on Twitter Saturday morning. The White House initially characterized the injunction as “outrageous,” but then withdrew that injudicious characterization, only to have the president tweet even more injudicious language that may well offend the appellate courts to which the order will be appealed.Justice Robart’s order is neither ridiculous nor outrageous, as evidenced by the refusal of these appellate judges to immediately overrule it. And the judge himself, who was appointed by former US president George W. Bush, is not “so-called” – he is a respected jurist who rendered what he honestly believed was a proper decision under the law.Having said that, the Washington injunction is too broad in scope and lacks nuance.It may well be modified on full appeal. It applies equally to individuals with different constitutional status. For example, a family from Yemen, with no connection to the US, has no cognizable right to receive a visa. Whereas, a visa holder already in this country might have such a right. But if the injunction is upheld, the president will have to comply with it, regardless of his personal views, or his lawyers’ professional judgments. As the Washington state attorney-general correctly put it, “No one is above the law, not even the president.”Whatever one thinks about the merits or demerits of Justice Robart’s injunction – or of the Massachusetts federal judge’s refusal to renew the injunction – we are observing in action the American system of checks and balances, and separation of powers.Although the executive and legislative branches are solidly in Republican hands, a single district court judge, representing the lowest level of the judicial branch, can bring a presidential order to a screeching halt – at least until and unless it is reversed or modified on appeal. And there is nothing the president can do about it, other than tweet his outrage and order an appeal to be taken to the Court of Appeals and eventually to the Supreme Court.But because Republican senators refused to allow former president Barack Obama to fill the vacancy resulting from justice Antonin Scalia’s death a year ago, the Supreme Court might well split 4-4 if this case comes before it, as the justices did when a case involving Mr. Obama’s executive order on deportation came to them from the federal courts in Texas. A 4-4 split leaves the lower court judgment intact.But if the plaintiffs appeal the Massachusetts order, the Supreme Court may be presented with conflicting judgments. The 9th Circuit may affirm the granting of the nation-wide injunction, while the 1st Circuit affirms the denial of the injunction.A 4-4 split would leave both conflicting orders in place, thus causing uncertainty and even chaos. That is why the pending nomination of Neil Gorsuch – as the potential tie-breaking ninth justice – is so important. But his nomination is unlikely to be approved by the Senate in time to decide this divisive issue, which appears to be on a fast track to the Supreme Court.There are, of course, other options.Mr. Trump could rescind the executive order and re-write it in a more careful and lawful manner. As currently written, it contains several constitutionally questionable provisions especially with regard to religion. An executive order could be crafted so as to eliminate these questionable elements, without compromising on national security. This would require the kind of consultation with experts – legal, military, intelligence, legislative – that was obviously lacking in the hasty rollout of this broad and unduly provocative order. If he wants to clean up the mess he caused, President Trump would have to acknowledge that he issued the initial order in haste – that he was wrong. But “wrong” is not a word that comes easily to Donald Trump, at least when he is talking about himself.So we may have to live with the uncertainty resulting from an overbroad executive order, an overbroad injunction against that order, and overbroad appeals from conflicting judicial decisions.No one ever said that the system of checks and balances, and separation of powers, would be efficient or pretty. But this case demonstrates that, like democracy itself, the US’s complex system of governance is better than its alternatives.