Unless the government starts actively and unequivocally fighting against Ustasha nostalgia, and rising neo-fascism and anti-Semitism, it looks like the situation in Croatia will only get worse. 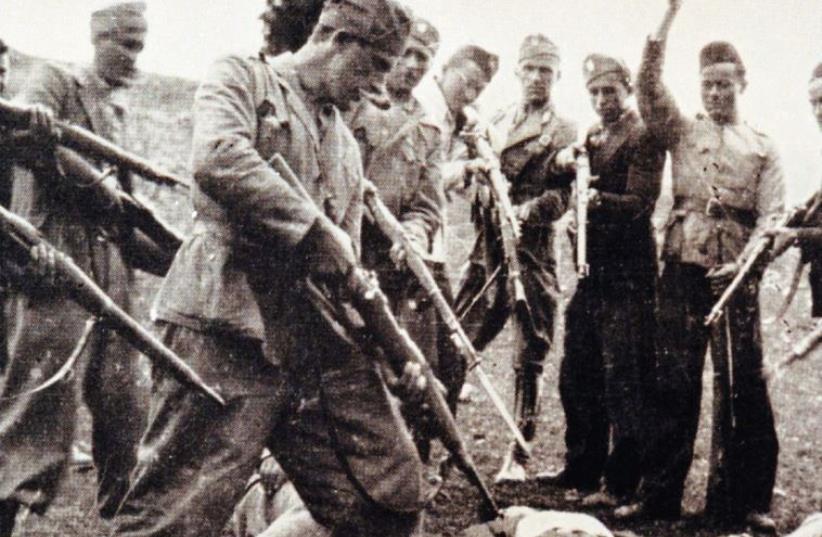 VICTIMS OF the Nazi-backed Ustasha regime killed at the end of the World War Two lay on the ground surrounded by posing Ustasha soldiers near the Sava river in Croatia in 1945.
(photo credit: REUTERS)
Advertisement
Most people assume history is exclusively about the past, but in many countries it is also about the present and future. These days, one such country is Croatia, whose troubled history continues to plague its present and threaten its democratic future.Last week, I wrote about the fascist and anti-Semitic chants yelled by Croatian football (soccer) fans at the recent friendly match against Israel, but recent developments clearly indicate that such incidents are merely the tip of the iceberg.Earlier this week, Croatian army veterans (of the war of the Nineties against Yugoslavia) of the Ninth Division gathered to celebrate their unit’s 25th anniversary, but also to mark the 75th anniversary of the establishment of the Independent State of Croatia (NDH) which was governed by the fascist Ustasha movement and pursued genocidal policies against Serbs, Jews and Roma. The veterans’ call to legalize the Ustasha salute of “za dom spremni” (the Croatian equivalent of the Nazis’ “sieg heil”) is an attempt to legitimize the murderous policies of the NDH and whitewash that regime’s crimes.Another typical initiative, but one which is much more dangerous, is a new documentary movie entitled Jasenovac-Istina (Jasenovac- The Truth), which had its world premiere this past February 28 in Israel, of all places, most probably to help deflect potential criticism of its highly controversial content. Jasenovac, which was established in August 1941, was the largest of the concentration camps created by the Ustasha regime of the NDH in order to rid their country of its minority populations, as well as their Croatian political opponents. The camp, which was run exclusively by the Ustasha, was notorious for the cruelty of the guards and the tortures they invented to increase the suffering of their victims. To this day, the number of those murdered in Jasenovac is a subject of fierce debate between Croats and Serbs, but it is reasonable to assume that at least 80,000 to 100,000 innocent people were murdered or died there of the terrible conditions, which earned the camp its nickname of “the Auschwitz of the Balkans.”As the concentration camp with the largest number of victims in the former Yugoslavia, Jasenovac became a symbol of Ustasha crimes and cruelty, which explains why it has currently become a target of the neo-fascist Croatian revisionists, as evidenced by this new film by Jakov Sedlar. According to reliable sources in Croatia, the film claims that Jasenovac was actually only a labor/concentration camp, not one at which there was any attempt to commit genocide of any sort, and that the number of Ustasha victims there was less than the number of innocent people murdered by the Yugoslav partisans after the war on the same site. In other words, it was the Communists who set up a “death camp” in Jasenovac, not the Ustasha, a totally unsubstantiated claim without any hard evidence to back it up.In fact, some of the material presented to support this assertion has already been exposed as a forgery by a local website. As far as the categorization as a death camp, the fact that there was no industrialized murder in Jasenovac during World War II explains why that term indeed does not apply, but the enormous number of Ustasha victims undoubtedly justifies its reputation as one of the worst camps in Europe. In addition, the film accuses former Croatian presidents Mesic and Josipovic, both known for their opposition to fascism and Ustasha nostalgia, as well as several left-wing journalists, of keeping alive the Communist myth of Jasenovac, and covering up the full truth about postwar Communist crimes. Needless to say, recently- appointed Croatian Minister of Culture Zlatko Hasanbegovic, who is well known for his support for right-wing causes, was quick to praise the film.Given these circumstances, the Serb and Jewish communities, along with the Croatian anti-fascist organizations, have decided to boycott the official government memorial ceremony annually held at Jasenovac on April 22. Instead, the Jewish community announced that it would hold its own memorial ceremony a week earlier on April 15, as a form of protest against the government’s failure to act against the revival of fascism and anti-Semitism in the public sphere.The only good news in that respect these days was a declaration by both the Croatian president and prime minister (separately) that the Ustasha government was a “criminal regime,” but these pronouncements were apparently only made at the request of the US State Department’s envoy on Holocaust issues, who met with them earlier this week in Zagreb.In other words, unless the government starts actively and unequivocally fighting against Ustasha nostalgia, and rising neo-fascism and anti-Semitism, it looks like the situation in Croatia will only get worse.The author is director of the Israel office and Eastern European Affairs of the Simon Wiesenthal Center, and coordinator of SWC Nazi war crimes research worldwide.