Crowdfunded no-meat coming to your kitchen

Friedman: “Imagine reading a headline in the newspaper saying Israel is saving the world from hunger,” instead of what you usually read from the Middle East. 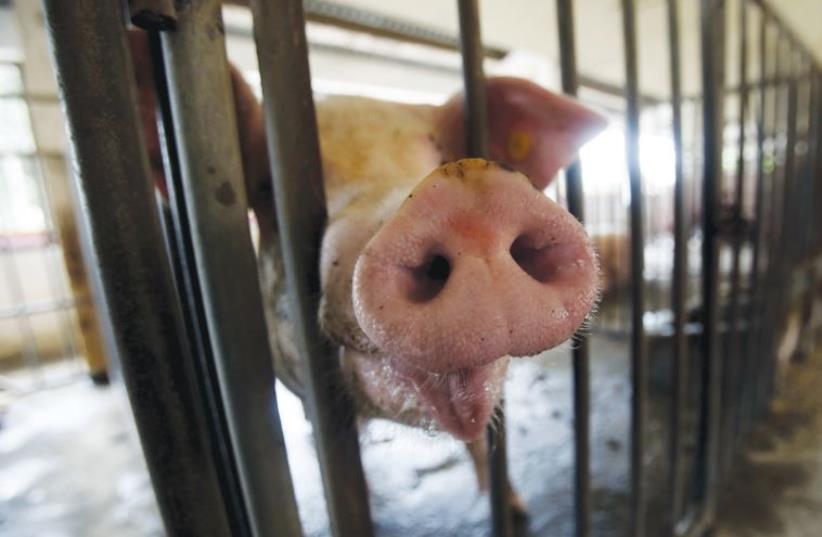 Could science provide the author with the opportunity to eat a Jewish-friendly bacon double cheeseburger, again?
(photo credit: REUTERS)
Advertisement
Shir Friedman calls me a carenivore. “You’re someone who cares about not harming animals… but you still eat them,” she says with a smile. Friedman wants to change all that. If her new company takes off – and judging by the rapid response to their Indiegogo campaign, I have every expectation that it will – I may be able to save some of the 50 billion chickens that are slaughtered every year for meat, while still enjoying my Shabbat schnitzel.The company is called SuperMeat and it’s part of a growing ecosystem of “cultured meat” technologies where meat, be it a chicken breast or a hamburger, can be grown from a stem cell without ever hurting the animal itself. There are a variety of techniques being studied, from purely test-tube chicken to research into 3D printing of living tissues.The big idea behind SuperMeat is to take cultured chicken mass market.Using technology developed by Prof. Yaakov Nahmias of the Hebrew University, SuperMeat is inventing a kind of “oven” that can cook up my schnitzel from scratch on the spot – in a restaurant, supermarket or even at home.SuperMeat would manufacture the oven and sell a special serum, powder or capsule containing cell samples, which you would inject into the unit. (In that way, SuperMeat becomes the “SodaStream for cultured meat.”) “The oven makes the cells believe they are still inside the animal’s body,” Friedman explains – that’s how they grow into real muscle tissue.How long will it take to create my chicken dinner? Friedman couldn’t tell me, although she’s hoping for somewhere between 10 and 30 minutes.You see, this is all still in the concept stage. SuperMeat launched a crowdfunding campaign on Indiegogo just last week to raise $100,000. In less than 24 hours, 41 percent of the total had been raised. As of this week, it was up to $78,000.That should be enough to get to a prototype in the next year and a half, Friedman says. The full mass-market device will take closer to five years and require lots more money – up to $2.5 million.How can Friedman be so sure SuperMeat’s super oven will work? Because SuperMeat co-founder and chief science officer Prof. Nahmias has done this before – with human liver tissue. Commercializing the technology for your local Aroma or my kitchen was a logical next step.The cultured meat business is still in its infancy. The first cultured burger was created and eaten only in 2013. Google co-founder Sergey Brin funded the research, making it perhaps the most expensive fast-food meal in history.Getting behind cultured chicken is important for a so-called care-nivore like me. (Brian Kateman, innovation manager at the Good Food Institute, might call me a “reducetarian” – a term he coined on the TED stage for someone who aspires to eat less meat.) I abhor the way modern industrial farming treats animals and I’m well aware of the damage it does to the planet – in terms of water and land usage, not to mention the methane gas produced by those tens of billions of animals before they are brutally transformed into our dinners each year.But despite my ideological affiliation, I just can’t bring myself to stop eating meat.With a SuperMeat oven in my kitchen, I wouldn’t have to.Israel has garnered a reputation lately as being a vegan hub. Tel Aviv has more vegans per capita than anywhere outside India, Friedman claims.Did that play a part in SuperMeat’s founding in the Holy Land? Friedman says absolutely. In addition to there simply being more interest in meat alternatives in Israel – Friedman has been vegan for the last decade, company co-founder Koby Barak has eschewed meat for 15 years – there’s patriotism at play.“Imagine reading a headline in the newspaper saying Israel is saving the world from hunger,” instead of what you usually read from the Middle East, she says.SuperMeat is focusing on chicken for now simply because there are more individual animals eaten. “For every cow slaughtered, 100 chickens are killed,” Friedman explains.Perhaps the most interesting question about cultured meat for Jewish consumers will be: is it kosher? SuperMeat interviewed three Orthodox rabbis – Yuval Cherlow, Dov Lior and Shlomo Aviner. In a video posted on SuperMeat’s Facebook page, all said that not only would cultured meat be kosher, it would be parve.That is, because the process of creating meat in a SuperMeat oven would be so different from the traditional raising (and killing) of live animals, cultured meat wouldn’t be considered fleishik (Yiddish for “meat”). In the video, Cherlow compared it with “the manipulative system that is used to make gelatin even from animals that are completely impure.From there, it gets even wilder: You could conceivably create cultured pork in a SuperMeat device and it would be kosher and parve, too.Which leads to the biggest question of all – can I have a kosher bacon double cheeseburger again? (It’s been 30 years, but my taste buds still remember.) Although cultured pork would probably be banned due to its visual similarity with regular meat, from the point of view of Jewish Law, some liberal decisors might rule it OK.Now that’s something to chew on while you’re making your donation to SuperMeat’s Indiegogo campaign.Here’s a link to SuperMeat’s crowdfunding page: http://bit.ly/29Mmnow.

The writer specializes in technology, startups and the entrepreneurs behind them. More at www.bluminteractivemedia.com.