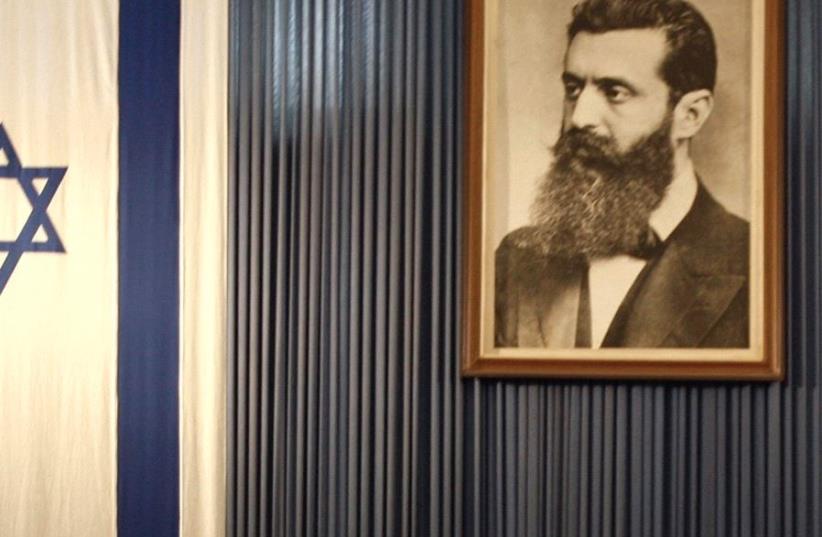 A PORTRAIT of Theodor Herzl.
(photo credit: REUTERS)
Advertisement
By all accounts, George Eliot’s Daniel Deronda is a great novel.Its call for Jewish renewal inspired the Zionism of Theodor Herzl and Eliezer Ben-Yehuda. But many 19th century readers and critics recoiled with an irritable confusion that has never wholly died away: what on earth had possessed the greatest Victorian writer since Dickens to espouse Jewish nationalism? A recent, thought-provoking Tikvah lecture series on Deronda by Ruth Wisse draws out just how much Eliot’s Zionism emerges from her broader concerns about modern life. Remarkably, the story’s exploration of haunting anxieties about rootlessness and identity seem more timely today than they did a century ago.“A human life,” writes Eliot, “should be well rooted in some spot of a native land... at five years old, mortals are not prepared to be citizens of the world, to be stimulated by abstract nouns.”Jewish political renewal was a practical hope for Eliot.But it was also a symbol for the longing of all peoples to live, openly and generously, according to ideals nourished by heredity, geography and national history.Eliot, née Mary Anne Evans, was an unlikely spokeswoman for such hopes. Estranged from Christianity and her family, she flirted with German philosophy as a young woman, before turning to fiction. Her novels were fabulously successful; Queen Victoria was an enthusiastic fan.Exercised by quandaries of women’s emancipation – how could women improve their position while preserving their distinctive qualities of heart and mind? – Eliot came to see that the Jewish people raised similar questions.Daniel Deronda’s 750 pages trace a complex plot, separated by uncomprehending critics into “English” and “Jewish” elements. The “English element” follows the beautiful, spoiled Gwendolen Harleth, a drifting late Victorian lady of the minor aristocracy. She falls into poverty and accepts a bad marriage with the bloodless, sadistic Henleigh Grandcourt. Like his restless wife, Grandcourt believes in “nothing very definite.” Eventually, through her suffering, and the interventions of Daniel Deronda, Gwendolen comes to yearn for the higher duties ignored in her upbringing.The “Jewish element” is a story of return. Daniel Deronda is given up as an infant by his free-spirited, apostate Jewish mother to her English lover. The boy is raised to be English gentleman, never knowing his true family; when he finally meets his mother, she coolly informs him, “I relieved you of the bondage of being born a Jew.” But events draw him toward his past. He rescues and falls in love with the unfortunate Jewish emigree Mirah Lapidoth. He enters the orbit of her brother, Mordecai, a dying, inspired prophet of Jewish national renewal.Deronda must choose between Mirah and Gwendolen, between being a Jew and an Englishman. The scandal – then and now – is that he chooses the Jews.Deronda is not impelled by discrimination; he might have become a second Benjamin Disraeli. The smitten, widowed Gwendolen is quite willing to overlook his Jewish past. “What difference need that have made?” she asks.But the difference in question is the heart of the book.Older critics failed to see how Eliot combines the “English” and “Jewish” elements to address the great modern theme of losing and returning to one’s roots.Although Eliot spent two years learning Hebrew and immersing herself in things Jewish, she never intended to write an exclusively Jewish story. “I meant everything in the book,” she wrote, “to be connected to everything else.”Her ideal, voiced by Deronda’s pious grandfather, was “separation with communication” between nations.She was speaking not only to Jews. Daniel Deronda’s need to escape the “mazes of impartial sympathy” is surely a familiar predicament. His return into that “noble partiality” which is “man’s best strength,” a universal need. Others, like Gwendolen, are able to learn from his example. “It shall be better with me for having known you,” she writes.The book’s unflinching treatment of these themes can unnerve – fastidious Victorian manners were wholly unconcerned with our notions of political correctness.Eliot defended the value of difference maintained by separateness: for Jews, Englishmen, perhaps also for women. She doubted the soundness of ideas unanchored in history, tradition, blood. But she rejected equally the claims of tradition or blood made narrow by the absence of communicated ideas.If the Jews could recover their roots, might there not be hope for everyone? Eliot’s was no resentful “identity politics.” No exclusionary intolerance.Zionism would require the Jews to find their better selves, and the English – not precisely a “lively, impassioned race, preoccupied with the ideal” – to feel and act generously.Doctrinaire cosmopolitans are not alone in rejecting Eliot’s vision. Edward Said focused particularly on Daniel Deronda in a famous 1979 essay attacking Zionism.Noble ideas, he argued, are nothing but the historical sign-posts of brute power struggles. It was not Eliot’s celebration of inherited difference that offended him.It was her idealism.But Eliot knew what she was doing in choosing the Jews as her subject and symbol. The intersection of the ancestral and the ideal is quintessentially Jewish.Ideals openly communicated are precisely what raises Zionism above national triumphalism.The author is a PhD candidate in political science at Boston College.