Dialogue is the only way

Is it possible that the turmoil between US and Israeli leaders has actually undermined the underlying relations between these two countries? 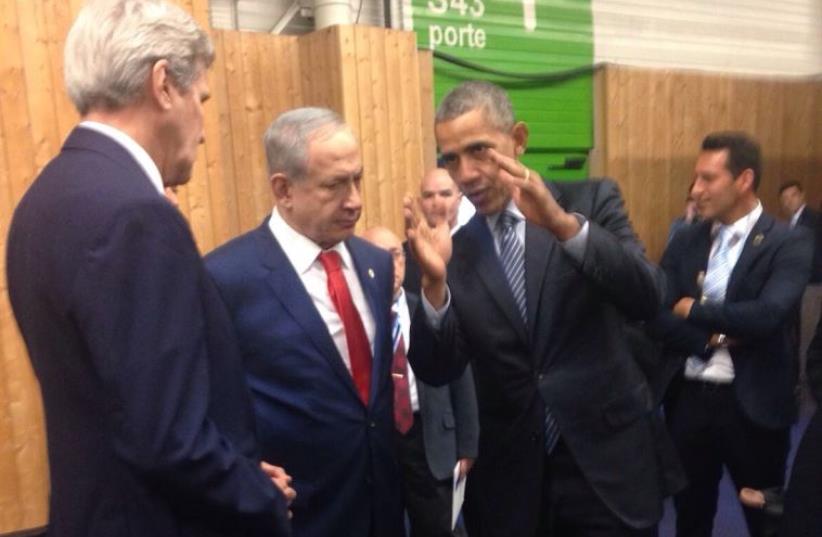 Netanyahu Obama and Kerry at the world climate change conference 2015
(photo credit: GPO)
Advertisement
Much has been made of the quality of US-Israel relations in recent years. On the one hand, as the cliché goes, “the relationship is unbreakable” and the two nations are the closest of allies – family. However, especially in the clash surrounding the Iran nuclear deal, this relationship has appeared to sour. Is it possible that the turmoil between US and Israeli leaders has actually undermined the underlying relations between these two countries? Allow me to assuage your fears: despite the tension and mistakes made by both sides, t he relationship is still strong.The most prominent example of this strength is the special and unprecedented military and intelligence cooperation. Both Israelis and Americans, albeit with different priorities, confront religious fundamentalism, terror, nuclear proliferation and the destabilization of the basic political order in countries in the Middle East and North Africa from Tehran to Tripoli. Indeed, security and intelligence collaboration have never been stronger – and I say this based on conversations with people with firsthand knowledge.Even with this unprecedented cooperation, the bilateral relationship – like any other – must be maintained, especially considering the social and demographic changes in both countries over the years. These changes underscore the absolute importance of direct and unmediated dialogue between leaders, public officials, journalists and businesspeople of both countries.It is precisely for that reason that we initiated the Saban Forum over a decade ago; to nurture this discussion and conduct it in an open and productive setting, without the background noise that often disrupts the political discourse.This dialogue is unique, both in terms of the level of the participants and in its ability to generate a real conversation. Participants at this annual gathering discuss and hear candid analysis about the future of the international and regional political system, and about shifts in Israeli and US policy. They are also able to clarify issues under dispute.The forum is also important in facilitating ties among the US and Israeli public. It has been attended by presidents, senators, government ministers and secretaries of state, as well as Israel’s senior leadership.It is a preferred platform for freely expressing opinions, and is thus broadly covered in the US media, as well as in the Israeli press. It presents an ideal opportunity for addressing the burning issues of the day, working out disputes and enabling deeper discussion. Our experience shows us that the American and Israeli public appreciate honest and open dialogue, and that is exactly what they get at the forum.Another critical element in US-Israeli relations is the dialogue with moderates in the Arab states. We take steps to coordinate encounters between Israeli politicians and Arab representatives from countries with official relations with Israel and beyond. These discussions touch on painful issues, but in a direct and honest manner. The openness and willingness to discuss the issues exemplify Israel’s nature as a democracy, similar in many ways to the system of government in he United States.The relationship with the United States is a fundamental element of Israel’s national security. We must not give it up or impair it, especially in times of such significant changes in the Middle East and around the world. American support is critical to Israel’s military power and diplomatic standing, both at the government and public levels, as expressed, among other ways, in the annual Friends of the IDF galas. Therefore, it is essential that we preserve this arena and keep it free and clear of tension. There is no alternative to strategic dialogue, in times of calm and especially in times of dispute.The annual Saban Forum is scheduled to begin in Washington DC today.