With a Japanese mountain range back lit by the setting sun, I experienced what it meant to be a Jew and a Zionist. 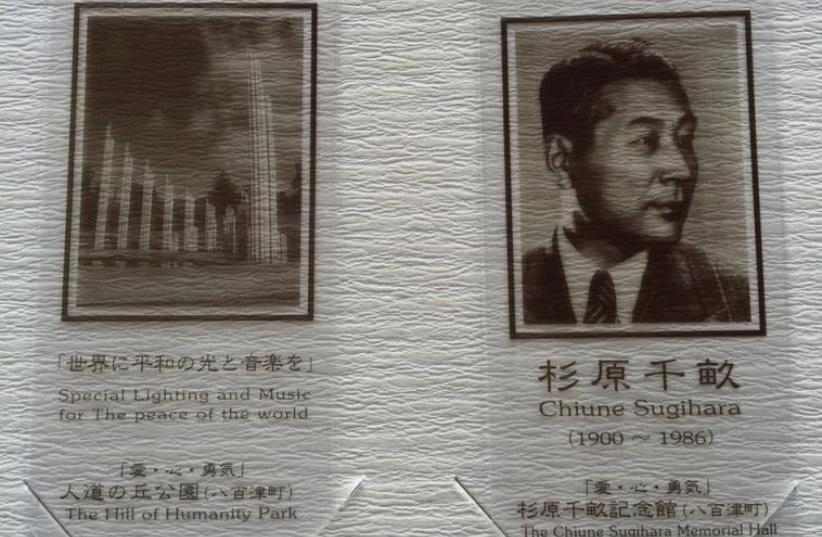 Chiune Sugihara memorial.
(photo credit: BRIAN REZEN)
Advertisement
Most Jews regard themselves as Zionists, and I’m one of them. I support Israel as a Jewish homeland, now and forever. More fleeting, however, is the spirit of Zionism.Some experience that spirit when the landing gear touches down at Ben-Gurion Airport on their first visit to Israel. Others taste what it means to be a Jew in Israel at the Western Wall on Shabbat or in the wilderness of the Arava.For me, I first experienced that spirit of Zionism in – of all places – Japan. Let me explain.Most of the time, I am a track physician at Parx Racing, where the job all too frequently involves dealing with injuries suffered by jockeys. It’s a tough, dangerous job, and I have a vested interest in keeping them safe. At that place and at this time, I am the “jock doc.”My commitment to their-well-being led some years ago to a conference in Tokyo of physicians from around the world who treat jockeys and share my commitment to their safety. It was a fantastic two days of learning and sharing.
See the latest opinion pieces on our page
I had another goal for this trip. I felt compelled to make a pilgrimage to the Chiune Sugihara Memorial Museum.
Known as the “Japanese Schindler,” Chiune Sugihara had helped roughly 6,000 Polish Jews escape the Nazi extermination machine over 29 days in 1940. Sugihara’s act of courage was chronicled by one of the Jews he saved, the late Johns Hopkins University scholar Samuel Iwry, in To Wear the Dust of War: From Bialystok to Shanghai to the Promised Land.Japan’s consul to Lithuania, Sugihara wrote and signed the letters of transit that allowed the Jews to travel through Russia on their way to Japanese-held Shanghai. He did so out of conscience and against the explicit written orders of the Japanese Foreign Ministry.I was determined to say kaddish at his grave (he died in 1986), and for a year before the trip I kept a picture of Chiune Sugihara and his wife, Yukiko, taped to my computer monitor as a reminder of my commitment.A commitment indeed was required.The Sugihara Memorial Museum is located in his birthplace, Yaotsu in Gifu Prefecture, far from the bright lights of Tokyo. The train connections for my travel to Yaotsu were arranged by the assistant concierge at my hotel, but I carried several burdens. I had all my luggage, and I knew only a few words of Japanese.Perhaps worst of all, I had no clue how I would get from Yaotsu to Osaka, the next stop on my journey.After a six-hour trip, I arrived at the memorial museum, which is perched atop the Hill of Humanity. I spent the next hour or so tearfully touring the two-story museum where the progeny of “Sugihara’s List” had sent letters of gratitude and pictures.An exhibition faithfully reproduced his office in Kaunas, Lithuania, and allowed me to imagine him tirelessly writing and signing the transit visas over a mere 29 days. With a lump in my throat, I wrote in the names of the wife and daughter of my mentor, Dr. Marco Nahon. Both had perished in Nazi gas chambers.As I exited the museum, I noticed a small souvenir stand selling booklets describing the Sugihara saga, which has been translated into many languages.There, I noticed a woman purchasing the Hebrew version.Never shy, I asked if she was Israeli. Yes, she said, and was part of an Israeli bus tour. The buses were waiting to depart for their next destination – Osaka.It had to be beshert, or divine providence.Outside the buses were three men smoking and drinking black coffee. “Shalom aleichem [peace be upon you],” I greeted them. “Aleichem shalom,” they replied.One of them, Shauli, was the Israeli tour leader, and I asked if I could hitch a ride to Osaka. Over the mild protest of the Japanese chaperone who mentioned liability issues, I was invited to join the group. (Cultural note: Israelis hitchhike as a way of life; Japanese do not.) I was welcomed aboard with warmth, love and a deep feeling of belonging. The joy I experienced for six hours traveling with my fellow Jews is one of the highlights of my life. Although only about half of the group spoke English, our communication was meaningful and spiritual. I sat in joyous awe as I was fed both bodily and spiritually, sharing salami, fruit, cookies and scotch. My new friends sang poignant Israeli folk songs, and some even danced in the aisle.How was it that our paths crossed in this vast universe at that very moment? Beshert, it had to be. For me, it was a coming home, a return to Zion. With a Japanese mountain range back lit by the setting sun, I experienced what it meant to be a Jew and a Zionist. This was truly an epiphany – experiencing the spirit of Zionism for the first time and amazingly, in Japan.The writer lives in Center City Philadelphia with his wife, Alice, and continues to serve as the “jock doc” at Parx Racing.Japan’s consul to Lithuania, Chiune Sugihara wrote and signed the letters of transit that allowed the Jews to travel through Russia on their way to Japanese-held Shanghai. He did so out of conscience and against the explicit written orders of the Japanese Foreign Ministry.