Division at the Western Wall is no path to unity

Over 60% of American Jews are totally unaffiliated, and have little or no interest in Judaism, Israel, Jerusalem or the Western Wall. 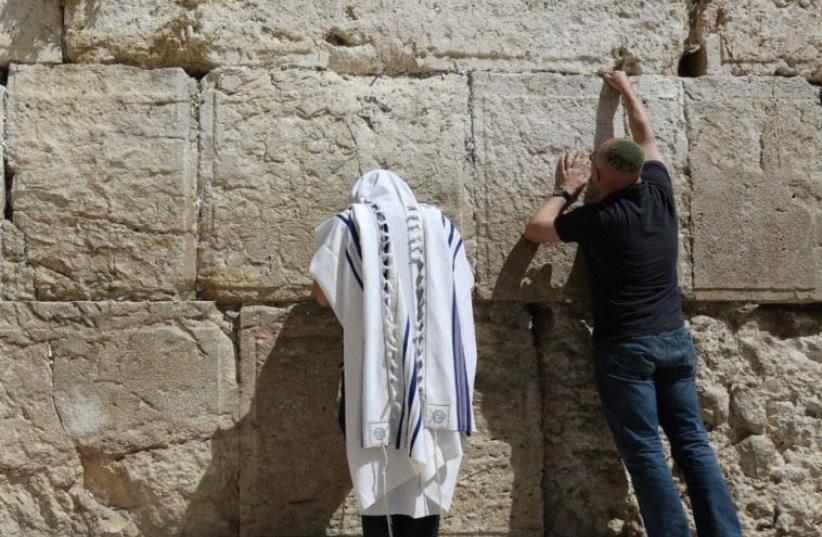 Prayer at Western Wall
(photo credit: MARC ISRAEL SELLEM)
Advertisement
The statements from American Jewish movements, the Jewish Agency and numerous op-ed writers could hardly have been more repetitive. Following the decision of Prime Minister Benjamin Netanyahu and his cabinet to suspend the “deal” that would have created a large plaza for mixed prayer at the Western Wall, most rushed to offer opinions no more varied than the news reports, as if there were only one reasonable position that writers (and readers) could take.Their consistent thesis was that Netanyahu had caved in to “political pressure” from the haredi political parties (universally described as “ultra-Orthodox”) and that suspension of the deal was divisive, a rejection of American Jewry. Pejoratives are not merely mean-spirited and divisive in their own right; in this case, they were used to upend reality.Neither Uri Ariel nor Betzalel Smotrich, MKs of the Bayit Yehudi Party, could remotely be described as “ultra-Orthodox.” Yet both wrote a letter to Netanyahu urging that the deal be scrapped; after it was, Ariel said in a prepared statement that “we succeeded in preventing an unnecessary split among the Jewish People and an attack on the social and religious fabric of Israeli society and the Jewish People.”So which position unites us, and which divides? Each claims to side with unity, but only one can be correct.The claim that the Western Wall is “controlled” by “ultra-Orthodox rabbis” inflames passions and masks the truth: there is no natural demand for an alternative, mixed-gender space at the Western Wall – from American Jews, much less Israelis. Contrary to the common narrative, it is creating such a space that would divide our nation.The existing plaza exists purely due to popular request. Following the reunification of Jerusalem in 1967, traditional Jews immediately flocked to the holy site and requested suitable facilities for prayer. Today thousands (and often tens of thousands) stream to the site daily, at all times in all seasons, pouring out their hearts at the site they regard as the holiest place Jews may go today.Gender-separate prayer services are no “ultra-Orthodox” invention; they are part of our universal Jewish heritage. Descendants of refugees from Yemen, Iraq, Syria, Egypt and Algeria pray at the Western Wall, alongside those whose grandparents were born in Israel and those who immigrated to escape Soviet oppression and antisemitism in France – joined by immigrants and students from America and around the globe. Despite millennia of dispersion, Jews everywhere follow the same basic prayer service. In our common Jewish practice, we find unity.There is no similar interest in a site for mixed prayer. The first reason for this is theological: at its inception, the Reform movement rejected the special holiness of the Temple in Jerusalem, excised prayers for its restoration from their liturgy, and for this reason began to call its synagogues “temples.” Within recent years, Reform leaders declared that the Temple Mount is irrelevant save for its “historic significance” and explicitly disavowed any interest in restoration of Jewish worship at the site.And despite an investment of tens of millions of dollars, the American liberal movements have failed to attract even minimal Israeli interest. No more than one percent of Israel’s six million Jews are members of Reform or Conservative congregations. “Liberal” Tel Aviv has but one Reform temple and over 500 traditional synagogues.In contrast to the Orthodox who pray three times each day, Reform Jews attend synagogue no more than several times per year.Thus, there are multiple independent reasons why the demand from the American liberal movements for a place at the Western Wall “equal” to that provided to traditional Jews offends logic and reason.These movements frequently refer to times of antisemitic oppression to “prove” precedent for undivided prayer. In 1928, for example, British authorities removed the divider placed at the Western Wall – while attendees were in the middle of Yom Kippur prayers. At no time in history did Jews willingly remove the divider or pray without one, and it is truly offensive that liberal leaders would exploit readers’ ignorance to imply otherwise.Many American Jews are also unaware that there already exists a facility at the Western Wall for mixed prayer, and that the claim of American liberal leaders that they cannot pray as they wish at the site is entirely false. Several years ago, then-religious affairs minister Naftali Bennett responded to persistent agitation from Women of the Wall (WOW) and American liberal leaders by building an alternative facility he called “Ezrat Yisrael.” WOW responded with a 24-hour sit-in and steadfastly refused to move its monthly services to this site, although they could pray there undisturbed as they claim to desire.The truth is, no one uses this site except on an occasional basis. Neither American liberal movement has even once filled the site to capacity, yet they demand a new, larger facility as if there were a real need.Liberal leaders misportray the interests of their American congregants. Jewish tourists do not come to the Western Wall looking for the same prayers they rarely attend at home. On the contrary, like visitors to the holy sites of religions all around the world, they come to see – and perhaps join – natives at their native prayers.Today only 25% of American Jews are members of a Reform or Conservative congregation. Over 60% of American Jews are totally unaffiliated, and have little or no interest in Judaism, Israel, Jerusalem or the Western Wall. The liberal movements are losing their grandchildren to assimilation; they would do far greater good were they to apply their passion toward ensuring future Jewish generations, rather than upsetting traditions of prayer at Israel’s Western Wall.Rabbi Pesach Lerner is executive vice president emeritus of the National Council of Young Israel. Rabbi Yaakov Menken is director of the Coalition for Jewish Values, a public policy institute reflecting classical Jewish thought.