Do we desire life?

Dividing Jerusalem would mean surrendering to terrorism and handing over east Jerusalem to Hamas and Islamic State. 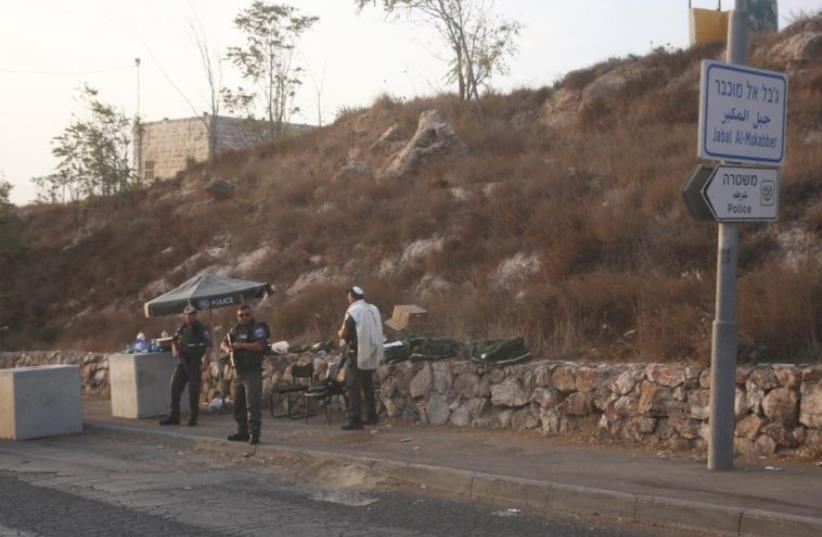 Border Police man a roadblock erected at the entrance to the east Jerusalem neighborhood of Jebl Mukaber
(photo credit: MARC ISRAEL SELLEM)
Advertisement
The terrorist attacks of recent days have brought with them a wave of leftist headlines in the media, as if we have learned nothing: “Will the wave of terror bring about the separation from ‘Palestinian Jerusalem’?” asks Shalom Yerushalmi. “The main thing is to separate,” writes Ben Caspit. In Ma’ariv it was almost possible to hear the joy as they reported: “66%: separate from the Arab neighborhoods of Eastern Jerusalem.” Yair Sheleg also jumped to conclusions and reported on “the death of the one-state vision.” We “must separate from the Palestinians and make political concessions,” he stated. And these are only a few examples.It seems that the current wave of terrorism has brought the color back to the cheeks of those who advocate dividing the Land, and even gave them the courage to step it up a level and say aloud what until now was taboo: divide Jerusalem. (And clearly, anyone who speaks of dividing Jerusalem has obviously already given up on Judea and Samaria.) Again they wave the banner of that solution that seems so simple – but none of them tell us that the seemingly simple solution is like cutting one’s head off to cure a headache.Despite this, and contrary to all common sense, we are forced to listen repeatedly to suggestions that we decapitate ourselves instead of taking a few Tylenols, drinking a little water and strengthening our body and soul until the headache passes. We keep hearing from analysts and public figures about the need to separate and divide the country and Jerusalem; a separation and division which would lead to religious and national extinction.The religious and national suicide inherent in the division of the country stems from the fact that it means surrender, of heart and soul. Yes, there is no choice but to tell the simple truth: we have returned to our land in order to be sovereign in it. In the entire land! This is our destiny as a people.But if the ideological discourse does not interest you, then let’s talk security: dividing Jerusalem would mean surrendering to terrorism and handing over east Jerusalem to Hamas and Islamic State.What do the scholars who advocate dividing Jerusalem think? What would happen if we separated? Who would rule there? Is our collective memory so short that we do not remember how those same experts ridiculed us when we issued warnings that leaving the Gaza Strip would bring about a rain of missiles on the south? Is there any reason to think it would be different this time (besides the targets of the missiles, that is – this time it would not be Ashkelon, Ashdod and the suburbs of Tel Aviv, but the Knesset, the president’s residence and the houses of hundreds of thousands Jerusalem residents)? You don’t have to be a security expert to understand that if the Arabs attack us today with knives, it is only because they cannot lay their hands on anything more effective – and our presence across the Green Line is the reason for this. After dividing Jerusalem, God forbid, they will attack us with firearms, with missiles and explosive belts. We have already learned the hard way that if the IDF and Israel Police do not have a deep presence in the field, Arab terrorism flourishes.And what do those who advocate division think about the other ramifications of dividing Jerusalem? Do they understand that such a course of action would only spur on the rest of the Israeli Arabs to continue the terrorism also in Jaffa, Lod, the Galilee and the Negev? And what would all of those analysts and scholars say then? That we must divide Jaffa? Separate from the Negev and the Galilee? Build a wall in Nazareth? How small are they willing to make the borders of Israel to maintain their illusions? Therefore, our response in light of the latest wave of attacks must be the total opposite of all the recommendations of those spineless and weak-minded analysts and public figures: not to surrender to terrorism but to restore deterrence, and to cut down, once and for all, the Arab dream of establishing a Palestinian state with Jerusalem as its capital. Not the division of Jerusalem but a demand to implement practical Israeli sovereignty in Jerusalem and in every location where Israeli sovereignty has already been applied. Not to separate from Judea and Samaria but to apply Israeli sovereignty over Judea and Samaria, with all of the implications that go along with that.The time has come to get into our heads this simple understanding: the Arabs are among us, and cutting off parts of the homeland and splitting our eternal capital will not bring us closer to the solution of the problem, but rather the opposite. Only when the Arabs understand that we are here forever, and that we will never surrender even one handful of land, only when they have internalized that Israeli rule of law will be sovereign in the field and that it will not pay for them to carry out terrorist attacks, then and only then will the area calm down.In other words, even if there are those who define sovereignty over the entire Land of Israel as a headache (which can also be dealt with), this headache is better than the national suicide that would follow dividing the country.“And you shall choose life.”Because we desire life.