Not only has Abbas never disavowed what he wrote in his book, he has reaffirmed it. 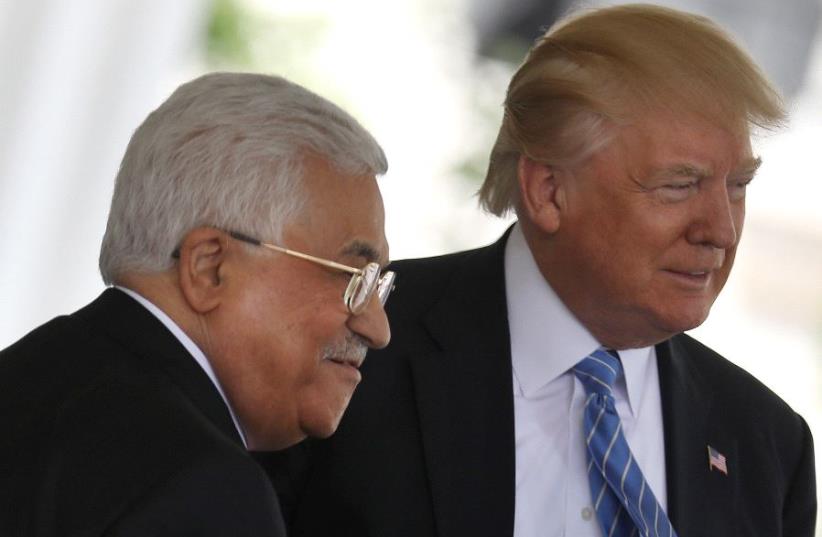 Donald Trump welcomes Mahmoud Abbas to White House in Washington , May 3, 2017
(photo credit: REUTERS)
Advertisement
A French political leader who referred sympathetically to a prominent Holocaust denier has been forced to resign in disgrace.But a Palestinian political leader who referred sympathetically to the same Holocaust denier was welcomed at the White House this week. Why the double standard? Jean-Francois Jalkh, leader of France’s National Front party, resigned in disgrace on April 28 after it was revealed that in a 2000 interview he said it was “impossible” for the Nazis to have carried out mass murder with poison gas. As his source, Jalkh cited the convicted Holocaust denier Robert Faurisson, whom he described as “trustworthy.”Palestinian Authority leader Mahmoud Abbas has referred to Faurisson in similar terms, in a bizarre and disturbing book that Abbas wrote in 1983 called The Other Side: The Secret Relations Between Nazism and the Leadership of the Zionist Movement.The central thesis of the book, which Abbas wrote as his doctoral dissertation at Moscow University, is that David Ben-Gurion and other Zionist leaders “collaborated with Hitler” and wanted the Nazis to kill Jews, because “having more victims meant greater rights and stronger privilege to join the negotiating table for dividing the spoils of war once it was over.”The “real” number of Jews murdered by the Nazis was “much lower” than six million and might well have been “below one million,” Abbas wrote. “Many scholars have debated the figure of six million and reached stunning conclusions – fixing the number of Jewish victims at only a few hundred thousand.”One of the alleged authorities whom Abbas cited was the same Holocaust denier at the center of the recent controversy in France. “In a scientific study published by the French professor Robert Faurisson, he challenges the existence of gas chambers which served the purpose of killing living Jews,” Abbas wrote. “He claims that the gas chambers were only used to burn corpses, out of fear of spreading plagues and viruses. It would not take a great effort in order to prove and document this aspect of the truth.”Not only has Abbas never disavowed what he wrote in his book, he has reaffirmed it. In a January 21, 2013 interview with the Lebanese television station Al-Mayadeen, Abbas was asked about his Holocaust writings. “I challenge anyone to deny the relationship between Zionism and Nazism before World War II,” Abbas responded, adding that he has “70 more books that I still haven’t published” that supposedly would prove his claims.Back in 2003, there were rumors that Abbas might visit Israel. Writing in The Jerusalem Post, Isaac Herzog (then a member of Knesset from the Labor Party, today leader of its successor, the Zionist Union) called for any such visit to include a public “apology and correction” by Abbas for his 1983 Holocaust book. Abbas’s “intolerable accusation” against Jewish and Zionist leaders needed to be explicitly retracted, Herzog insisted.Herzog’s point is equally relevant today. The hope of achieving genuine peace rests on the willingness of the PA leadership to sincerely reject the anti-Israel and anti-Jewish hatred of the past. Every time a PA official or media outlet denies, minimizes, or distorts the Holocaust (including comparisons of Israel to the Nazis), they are stoking the old flames of hatred that were supposed to have been extinguished with the signing of the Oslo accords in 1993.In France, the National Front’s Jean-Francois Jalkh was compelled to resign because the force of public opinion made it clear that he had crossed a line. Civilized society does not tolerate Holocaust deniers. It should not tolerate Abbas’s version of Holocaust denial, either.

The author is founding director of The David S. Wyman Institute for Holocaust Studies and author or editor of 16 books about the Holocaust and Jewish history.
Advertisement
Subscribe for our daily newsletter