The event sent shockwaves through the international community as images of dead children made the front pages of newspapers from the United States to Germany. 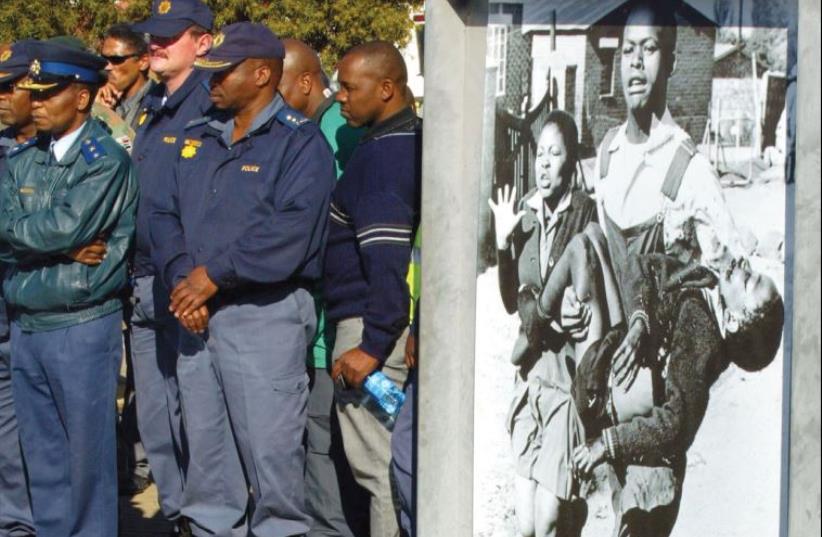 POLICEMEN STAND during the anniversary of the Soweto Uprising, marked every year, in Soweto, 2006. Dozens of black high school students were killed by white security forces on June 16, 1976, during a protest directed at the insistence that students be taught in Afrikaans, seen then as the language o
(photo credit: SIPHIWE SIBEKO/REUTERS)
Advertisement
Dr. Melville Edelstein, a Jewish social worker killed during the “student uprisings” of June 16, 1976, was recently commemorated in Soweto, the famous township outside of Johannesburg, South Africa. The township is known for its role in the fight to end apartheid. The student uprising, a pivotal struggle in the anti-apartheid campaign, began as a peaceful protest against the use of Afrikaans as the language of instruction in the township schools. During the protest, the police began firing indiscriminately at large crowds of students, killing an unknown number of people.The event sent shockwaves through the international community as images of dead children made the front pages of newspapers from the United States to Germany. In addition to igniting global outrage, the student uprising marked the beginning of the end of apartheid, as waves of violent protest soon followed within South Africa.In the middle of a crisp winter morning members of the Edelstein family and their friends arrived by motorcade to the Morris Isaacson High School, where Dr. Edelstein was killed during the protests. The school, built by a Jewish philanthropist in 1956, was an important gathering point during the uprising.Joining the family were the major of Johannesburg, Parks Tau, premier of Gauteng, David Makhura, minister in the presidency, Jeff Radebe, as well as a host of other political party and government officials, rabbis, Jewish community representatives and residents of Soweto whose relatives had also been killed that day. The event was the first of a number of official ceremonies to mark the 40th anniversary of the protests. The day is now an official holiday in South Africa and is known as Youth Day. Dignitaries gave speeches regarding the importance of the gathering and unveiled a new plaque commemorating the contribution of Dr. Melville to the people of Soweto. A member of the mayoral committee said that in time a statue would also be erected.The unveiling was especially poignant because it coincided with the bar mitzva of Edelstein’s grandchild Levi Rosenthal. After the official ceremony, the family, along with friends, supporters and rabbi, came together for a morning prayer service.The bar mitzva boy was called up to a makeshift bimah (podium) to read from a small Torah scroll.While a curious crowd gathered on the nearby street singing anti-apartheid songs, the bar mitzva party filled the air with strains of “siman tov u’mazal tov” as the portion was concluded.Dr. Edelstein was born in the small South African hamlet of King Williams Town in 1919 to Lithuanian/ Latvian emigrant parents, and was one of three siblings. An introverted child, he led a colorful life as an irreligious young intellectual studying in the United Kingdom during World War II. There he found and married his first wife, Isabel Green. The couple would have two children after moving back to South Africa. Still searching for meaning in life he traveled to Israel in 1954 and considered making aliya but was torn about leaving South Africa and his family. While in Israel, Edelstein made a trip to Sde Boker and stayed with David and Paula Ben-Gurion, to whom he explained his dilemma. Paula told him that “happiness resides in the bluebird of your back garden.” He eventually moved to South Africa and started doing social work in Soweto. Edelstein also got divorced and later remarried and had two more children, Janet and Shana, with his new wife, Rhona.Edelstein was a popular member of the Soweto community and employed by a government department called the Western Areas Bantu Administration, which dealt with welfare in the community.His particular focus was helping young people and the disabled find adequate education and employment.During his tenure there he completed a master’s dissertation on the attitudes of Soweto youth toward the apartheid government.His research indicated that violence would occur if oppressive laws against black South Africans were not reviewed and revoked.Although the government read the report, it ignored the findings.On the day the protests began, Edelstein was opening a new employment center. When he heard about the protests, he rushed back to his offices, worried about the safety of his coworkers. Unbeknownst to him, his coworkers had already escaped. While there an angry mob broke into the building and stoned him to death. Reporter Peter Magubane later found his body with a note saying “Beware Afrikaans is the most dangerous drug for our future.” The reporter said, “If they’d known who he was, this would never have happened.”Dr. Edelstein’s daughter, Janet Goldblatt, said, “He loved the people of Soweto almost like he did his own family. He believed all should be educated equally.”Dr. Edelstein was also active in the Jewish community and volunteered at The South African Jewish orphanage known as Arcadia. He was also a member of the Sydenham- Highlands North Hebrew Congregation which he joined when he became more observant later on in life. The synagogue houses another plaque erected by the Jewish community commemorating his work and contribution.Several years ago a documentary was made about the life and times of Dr. Edelstein and the events that led to his death. It was replayed by the national broadcaster in honor of the 40-year anniversary of Youth Day and can be viewed on YouTube.The author lives in Johannesburg South Africa and hosts the Israel in Focus on 101.9 Chai FM.