Ears to the ground

In approaching Middle East peace, Trump should focus on the attainable, not the improbable 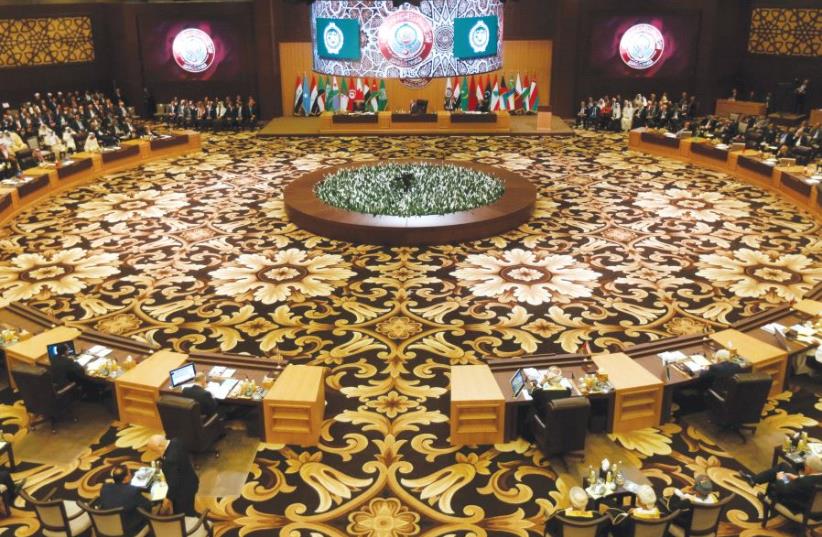 ARAB LEADERS attend the 28th Ordinary Summit of the Arab League at the Dead Sea.
(photo credit: REUTERS)
Advertisement
The annual Arab League Summit took place in Amman this week with US President Donald Trump’s international negotiator, Jason Greenblatt, in attendance as part of his Middle East “listening tour.” Greenblatt told Arab foreign ministers in the Jordanian capital that peace between Israel and the Palestinians is possible and reaffirmed Trump’s desire to pull off a deal.Egyptian President Abdul Fatah al-Sisi, Palestinian Authority leader Mahmoud Abbas and Jordan’s King Abdullah will all be in DC over the next month and peace talks will be high on the agenda at all of those meetings.Reports have suggested that Trump is looking into the possibility of hosting a Middle East summit with Abbas, Netanyahu and Arab leaders, including from Saudi Arabia and the Gulf states.“The time has come to make a deal,” Greenblatt said before heading to Amman. Arab foreign ministers expressed their support for a two-state solution in the summit’s closing statement. Abbas, too, told Greenblatt a deal is possible, while Netanyahu also said he is committed to working with Trump “to advance peace with the Palestinians and with all our neighbors.”The ball is rolling and diplomatic crunch-time is approaching. All sides will have to decide how to turn their words into actions and what positions they will bring to the table.Meanwhile, Netanyahu has said that he is in discussions with the US administration over ground rules for settlement construction in the West Bank. Yesterday he hinted that he was about to approve a new settlement, the first in 25 years, for the 40 families evicted from Amona – perhaps a hint that some kind of understanding has been reached on the matter.But if the Trump administration is serious about convening a Middle East summit, then there will be greater issues for Netanyahu to decide upon.Is Trump really serious? Or is he just going through the motions? If he does convene a summit, will he make do with a photo-op that gets Israel and the leaders of Saudi Arabia and the Gulf states on the same stage for the first time or does he really think he can clinch the “ultimate deal”? Does he really believe he can succeed where all other presidents have failed? For all the talk about a convergence of interests between Israel and the moderate Sunni states that are all threatened by Iran, it is highly unlikely that the Middle East’s strange bedfellows will go public with their relationship without Israel’s prior agreement to conditions it cannot accept.Furthermore, relations with Israel are hardly a priority for Saudi Arabia, as senior Saudi commentator Jamal Khashoggi wrote a few months back. Its priorities, he says, are economic reforms and the security threats posed by Iran and the collapse of neighboring countries – issues in which Israel cannot take a direct role. And when it comes to Iran, the worst thing Saudi Arabia could do, he said, is to be publicly aligned with Israel against Tehran.While tacitly acknowledging existing ties in certain fields, he notes, “Whatever the kingdom needs is accessible without his help. If we presume that we need to buy an advanced Israeli device to accomplish a strategic Saudi project, there are a thousand third parties that are ready to buy the device and re-export it to us.”As for the Palestinians and Israelis, Trump is hardly likely to have too much luck on that front either. It remains true that the maximum Israel is willing to give the Palestinians is less than the minimum the Palestinians are willing to accept and vice versa, and the fact that Trump prides himself on being a man who knows how to cut a deal will not change that.If Greenblatt has been listening to his interlocutors on his tour he should report back to the president that conditions are not ripe for the ultimate deal, but that common interests do exist.While a regional peace deal would obviously be desirable, rather than risk almost certain failure – that could well result in a new round of violence in a bid for an all-embracing final status agreement – Trump should concentrate on interim solutions; those that increase Palestinian autonomy, build up the Palestinian economy and institutions of state, increase freedom of movement, rein in settlement construction to the blocs and develop ties between Israel and the moderate Sunni states where common interests exist.