Some 16 people have died at latest count on Mount Kinabalu, the highest mountain in South East Asia at some 4,100 meters and a mountain of magnificent appearance. 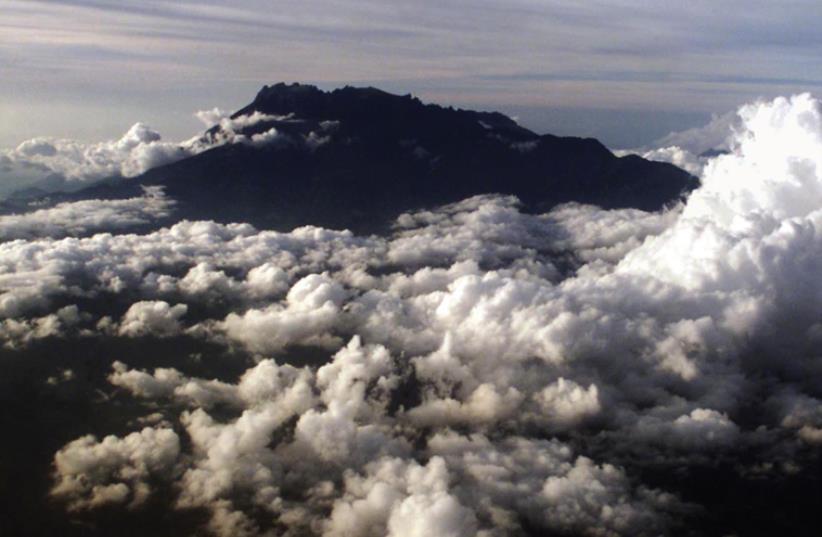 MOUNT KINABALU is a prominent peak on the island of Borneo.
(photo credit: REUTERS)
Advertisement
In this down-to-earth world in which we live, the supernatural seems a long way away. But there are times in Jerusalem when you feel that all is not logical, and strange things do happen. Maybe that’s why my attention has raced away to the top of a mountain in Borneo which has just been struck by a major earthquake.Some 16 people have died at latest count on Mount Kinabalu, the highest mountain in South East Asia at some 4,100 meters and a mountain of magnificent appearance. It stands in stately fashion, dominating the skyline of the Malaysian state of Sabah.It was in the British colony of North Borneo when I climbed it more than 50 years ago. In those days one could not imagine a team of westerners climbing that mountain, stripping naked and taking photos of themselves as they stood on the gray stone cap of the mountain. But that’s what happened a few days before the earthquake. So what shall we say – that the mountain was angry? Or rather, the spirits that live there according to local belief? Anyway, the Malaysians are furious at what they see as an insult to their land.It was more circumspect 50 years ago when a friend and I decided to make the climb. We negotiated in a village at the foot of the mountain.These were the Dusun people, the largest indigenous group in North Borneo, a sparsely inhabited piece of South East Asian jungle in which there were many different peoples. The British had asked us to make arrangements with the Dusun because they believed that the souls of their dead went up to the top of Kinabula for their afterlife, and the Brits thought we should be careful not to offend anyone’s feelings.The village people were well prepared to negotiate and when we set off we found ourselves with three porters to carry our scant luggage, and two religious men whose job was to appease the spirits.For this we had agreed to pay a modest amount of local dollars.The side of the mountain was steep and the path narrow and rugged, and progress was slow. We stayed one night in a cave and in the morning we quickly came to the top.The gray stone cap was free of jungle and we went from side to side taking in the magnificent views. One side looked south across the jungle-covered mountains of Sarawak, the adjoining British colony, and the other side out over the South China Sea with some islands of the Philippines.Our religious men appeared.One of them carried two healthy, fat roosters. They held the birds by the neck and began a ritual of waving them back and forth as they muttered what appeared to be prayers. I thought that they might sacrifice the birds but when they had finished they went back in a bag, and I reflected there would be a good dinner that night in one of the attap huts of the village. So we headed down, and the walk was much faster.So I’m glad we paid our respects to the mountain and to the spirits of the dead. The Dusun as I understood at that time were animists and honored all kinds of spirits in the rocks and trees and listened carefully to bird calls to seek warnings for the future. I hope the mountain is feeling appeased.The author is a veteran Australian political and foreign correspondent. In the early Sixties he was a correspondent for the Australian Broadcasting Corporation based in Singapore covering events in Borneo and elsewhere in South East Asia. He was a correspondent for the Australian press in China in 1973-74. After making aliya in 1986, he wrote for Australian and British papers and broadcast reports to Australia and New Zealand.