The secret of a Mediterranean diet: It’s the togetherness of the thing, as much as the thing itself. 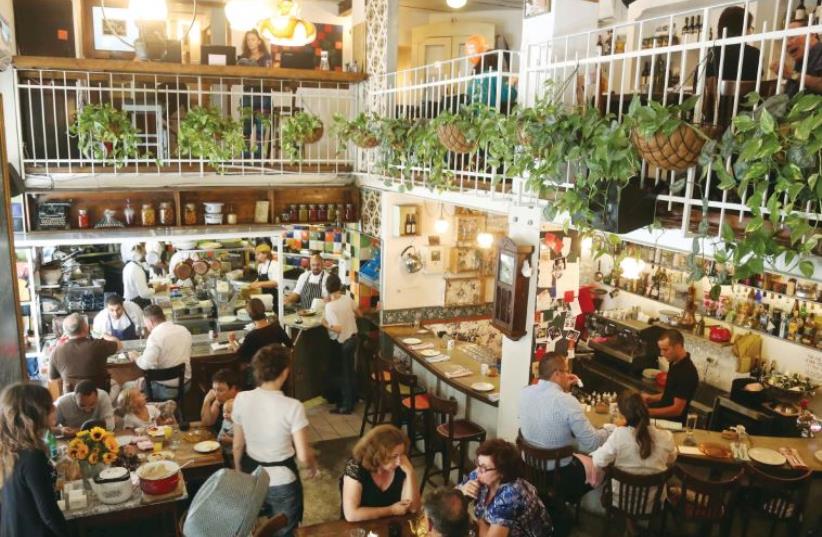 Patrons dine at a Mahaneh Yehuda restaurant in Jerusalem
(photo credit: MARC ISRAEL SELLEM/THE JERUSALEM POST)
Advertisement
When I moved to Israel over the summer, I knew that food would play a bigger role in my life – and it had already played a pretty big role before the move.Given the tall task my husband and I had of raising three Jewish children in a small town in Virginia with very few Jews, we figured the easiest way to instill some Yiddishkeit in the young ’uns was through their stomachs: by piling their plates high with unfamiliar food and making it familiar.As I removed an ice pack from a Whole Foods salmon one afternoon in preparation for a faux gefilte fish, I asked my sons to imagine the fish with its belly enveloped in an old issue of Der Forverts, circa 1929, the Yiddish words tattooing the salmon’s sides like a sensuous work of art.“Huh?” the kids said, barely looking up from their screens.“Okay, imagine the fish as a carp, flopping around in the bathtub upstairs,” I tried again. “And my head wrapped in a kerchief. How does that look?” “Like you have lice,” Adin, then eight, said, scrunching up his face.“That’s reasonable,” I nodded. Eight years old. In an hour, the gefilte fish would come out of the oven, indistinguishable from the salmon loaf my Quaker neighbors used to make in Indiana, which they served with fried chicken coated in cornflakes. “So do y’all feel a little more Jewish now?” Fast-forward to Tel Aviv, 2015. The kids will settle for nothing less than eggplants the size of their heads, sliced cucumbers you can smell from across the street, and hot tea with nana, while waiting for the falafel to fry.Our social lives are insane: We meet friends for breakfasts bursting with white cheeses and green tehina; for schnitzel and mashed potato lunches; for snacks swimming in olive oil and herbs the kids are too busy eating to extract; cholent at shul (hold the schnapps); and dinners at the end of which we all have pomegranate stains on our shirts and poppy seeds stuck between our teeth.And then school starts, I get a job and the kids stop eating.“FOOD!!!!” Adin (now 11) emails me in the middle of my class.“I left you money!!!!” I write back under my desk, at the risk of my students doing the same. “Buy whatever you want!!!!” “NO,” Adin replies. “I’ll wait until you get back.”“Natan, go get your brother a slice of pizza,” I WhatsApp.“I’m not hungry,” the teenager replies.“Mejadra from the Hippo place?” I suggest to Gidi. The kid loves lentils.“K,” he replies. “Bring some home.”On my next teaching day I try again, leaving three obscenely large stuffed peppers in the refrigerator and a note on the table that says: “LUNCH IN FRIDGE!!!!” When I return at 5 p.m., the peppers are no longer in the fridge; they are sitting on the table like three subjects for a still life in a slow process of putrefaction.“I’m starving,” Adin declares, pulls out a chair and sits down.And then I understand the secret of a Mediterranean diet, and why Alaskan voles live in groups in the winter and partake of a common food cache.It’s not the heart-healthy olive oil or the regulatory advantages of sharing a nest. It’s the togetherness of the thing, as much as the thing itself.The flavors brought out by the families you feast with. My kids were not getting tired of the best food in the world since gefilte fish or the Jewish Apple Cake from Whole Foods that was mysteriously rebranded as APPLE CAKE a month after it hit the shelves in our small southern town. They were simply not willing to eat it in social isolation, preferring to fast until the family was sitting around the table again, fighting between mouthfuls.Need more proof? The next morning I send an email to my friend Ami, whose job is at risk after the hi-tech company where he works is bought out by some Dutch dude. “I hope you can keep your job,” I WhatsApp him.“It’s safe until at least this afternoon,” he WhatsApps back. “They brought in hummus from Abu Hasan in Jaffa.” ■

The writer is a graduate of the Iowa Writers’ Workshop. Her work has appeared in such journals as The Atlantic monthly, AGNI, The Forward, Moment magazine, and Michigan Quarterly Review. She lives in Tel Aviv with her three children.
Advertisement
Subscribe for our daily newsletter