This semester, Jewish students on North American campuses have a fresh chance to get involved and take a stand when Israel is included in a list of the evils of the world. 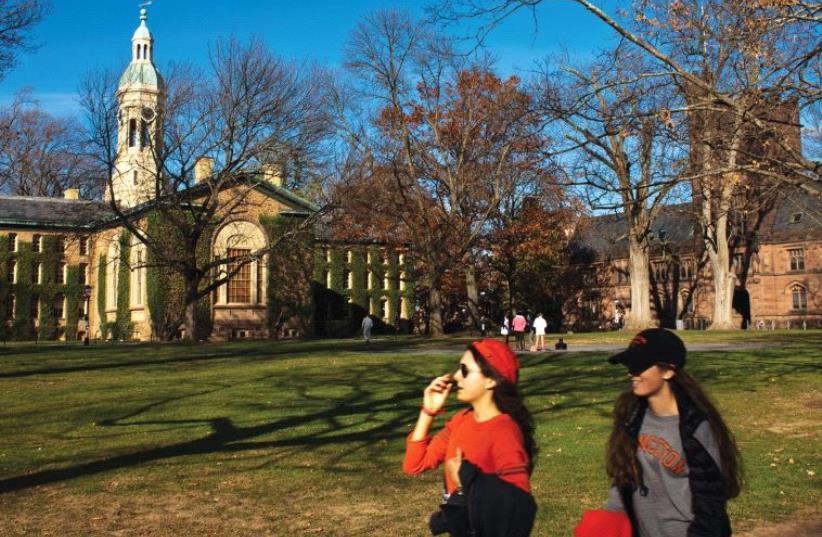 STUDENTS WALK around the Princeton University campus in New Jersey.
(photo credit: REUTERS)
Advertisement
With the academic year set to begin at universities throughout North America next week, Jewish students who care about Israel are going to face some daunting challenges.As laid out in a widely disseminated column published in The Washington Post recently by McGill University junior Molly Harris, titled, “So you’re a Jew and you’re starting college? Prepare for anti-Zionism,” elements of anti-Israel and anti-Semitic overtones are common place on her campus in Montreal, and have also been reported on campuses throughout the US.Last week, the atmosphere Harris described was also reported by Milan Chatterjee, a former UCLA student president, who informed the university that he would be leaving due to a “hostile and unsafe campus climate” created by pro-BDS organizations.Chatterjee told the Los Angeles Jewish Journal that he has been harassed and discriminated against because he “refused to support an anti-Semitic, anti-Zionist activity, organization and position while serving as president of the UCLA Graduate Student Association.”Another worrisome aspect of North American campus life Harris described was the growing tendency to exclude Israel-friendly Jewish students from social justice campaigns and organizations.That trend may intensify following the release of Black Lives Matter’s platform last month. The popular left-wing cause, which many US Jewish organizations and campus groups have vocally supported, outrageously called Israel an “apartheid state” and accused the United States of complicity in Israel’s “genocide” against the Palestinians.One of America’s leading Jewish voices, Barry Shrage, the president and CEO of the Combined Jewish Philanthropies of Boston, is a longtime supporter of forming alliances between the American Jewish community and other American minorities.But following BLM’s platform, he recently told a group of young Jewish professionals who are heading out this month to circulate among major US campuses advocating for Israel, that there is no turning a blind eye to such blindly hateful and false claims. The challenge of the campus Israel advocates, he said, was to convey to Jewish students that “we can have sympathy, love and commitment to the cause of humanity, but we also have to take care of our own people.“We have a primary responsibility – if I am not for myself, then who will be?” he added, citing Pirke Avot, The Ethics of the Fathers.Thankfully, Israel and its supporters are not alone to fight the poisonous atmosphere that has emerged on some campuses. The BDS movement has suffered a series of setbacks in its efforts to delegitimize Israel.More than a dozen US states have adopted anti-BDS legislation this year, including Arizona, Colorado, Florida, Georgia, Illinois, South Carolina and Iowa. And just this week, the California State Assembly voted unanimously to send an anti-BDS bill to Gov. Jerry Brown for signature.Also this summer, New York’s Gov. Andrew Cuomo signed an executive order banning state companies from collaborating with entities that promote BDS.Legislation and executive orders are welcome and necessary, but the real change is going to come through educating American Jews – beginning with college students – that integrating their traditional identification with the universal cause of aiding the underdog does not have be mutually exclusive with standing up for Israel.That does not mean blind support for the Jewish homeland and the policies of its government. Israel has its problems, like any country. And as long as the conflict over land with the Palestinians continues, it is valid to passionately argue in favor or against a onestate solution, a two-state solution, annexation, withdrawal or any other plan that might result in a workable solution for both Israelis and Palestinians. There are many ways to be pro-Israel, on and off campus.What is not valid are efforts to delegitimize, boycott or demonize Israel, or to stand aside while others, especially those like BLM and the BDS movement, do so in a bullying fashion that puts pro-Israel student activists in danger.This semester, Jewish students on North American campuses have a fresh chance to get involved and take a stand when Israel is included in a list of the evils of the world. As Shrage pointed out: If we are not for ourselves, who will be for us?