Hammond made clear that re-opening of embassies did not indicate agreement on all issues. 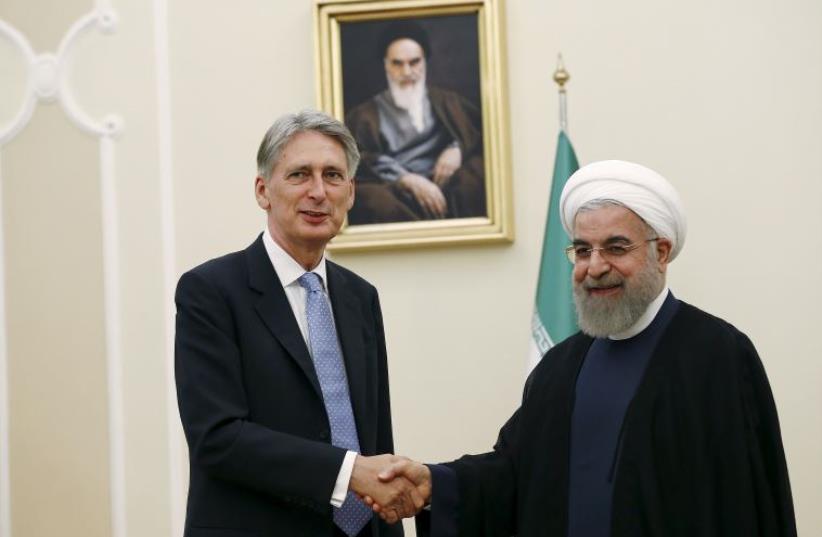 Britain's Foreign Secretary Philip Hammond (L) shakes hands with Iran's President Hassan Rouhani before a meeting at the President's Palace in Tehran, Iran
(photo credit: REUTERS)
Advertisement
British Foreign Secretary Phillip Hammond officially traveled to Tehran in August to reopen his country’s embassy that had been closed since November 2011, when it was overrun by demonstrators. At the ceremony in Tehran, Hammond called re-opening his country’s embassy in Tehran “the logical next step” and emphasized that major importance will be put on investment and trade upon sanctions being lifted.Many countries have sought to strengthen economic ties with Tehran since finalizing the Iran nuclear deal, formally called the Joint Comprehensive Plan of Action (JCPOA); Britain is no different.The UK has backed its words with actions. British and Iranian officials have each expressed desire to create a favorable financial environment for British banks to participate in trade and investment deals in Iran. The British foreign secretary disclosed that his government could make available nearly £90 billion ($140 billion) of Iranian frozen assets.“I think Iran will want to use some of the unfrozen assets to address some really very large infrastructure deficits, including in the oil and gas production industry, where the UK is very well placed to play a role,” Reuters quoted Hammond saying.Britain’s foreign minister’s comments are certainly welcomed words among Iranians and Britons. Statistics by The British Iranian Chamber of Commerce indicate UK exports to Iran dropped by 56 percent since 2011, from 203.5 million euros in 2011 to €89.4m. euros in 2013, the last year of available data.Both sides view thawing relations as a tremendous opportunity to boost economic and energy cooperation. In September, Iranian Petroleum Minister Bijan Zangeneh publicly supported foreign investment in its energy sector yet emphasized his country’s desire for acquiring foreign technology transfer instead of money.“More than cash or using the technology, we would like to have their advanced technology to be transferred to domestic companies,” PressTV reported him as saying.Iranian energy officials are confident adhering to the JCPOA can make Tehran a global leader in Liquefied Natural Gas (LNG) exportation.“Commissioning of LNG units is a function of technology and investment.In this regard, negotiations have begun with the countries which possess the technology for gas liquefaction and LNG production,” National Iranian Oil Company head Roknoddin Javadi said, according to Iran Daily.British energy companies would likely deliver Tehran the technological means by which to produce and export LNG. Lord Norman Lamont, President of Britain-Iran Chamber of Commerce, shared such sentiment during an interview with Iranian News Agency (IRNA) London. Lamont said that a delegation led by Richard Dalton, former British ambassador to Tehran, accompanied by experts in oil and natural gas and financial sectors, was scheduled to visit Iran last month.The UK has “a lot to offer Iran in terms of technology, expertise, high quality goods. ...[W]e are keen to do business with Iran,” he stated.Some high-ranking British officials have expressed desire for deepening ties in the Iranian market this coming year. George Osborne, British Chancellor of Exchequer, will purportedly head a trade delegation to Iran next year following the lifting of sanctions against Tehran.“Next year I would love to lead a proper, big economic and trade delegation to Iran,” he told The Financial Times.Hammond, however, made clear that re-opening of embassies did not indicate agreement on all issues.“This move does not mean that we agree on everything,” Hammond said.“But it is right that Britain and Iran should have a presence in each other’s countries. The role of embassies is to build co-operation where we agree and to reduce our differences where we don’t,” he stated.While reopening of embassies and adherence to the JCPOA agreement signal positive developments, both countries have agreed on certain regional issues. Each nation has unilaterally taken an anti-Islamic State (IS) stance. While Britain has flown sorties and supported Kurdish and Iraqi Security Forces, Iran has launched a ground campaign in Iraq and Syria.The British embassy in Tehran will initially employ a small number of staff and conduct partial consular services; however, officials anticipate elevation to full ambassador services shortly.While ties were being reestablished in Tehran, Iran simultaneously reopened its embassy in London which had been partly shutdown in retaliation. According to the state-run IRNA, Tehran’s embassy in London was partly reopened in February 2014, including its consular services department, which is responsible for visa issuances.A new framework for post-sanction foreign and domestic oil and natural gas contracts will likely come from the Iran Petroleum Contracts (IPC) Conference scheduled for November 28-39 in Iran. However, contract signing was moved from December to February in Britain to coincide with lifting of UK sanctions. British Petroleum and Royal-Dutch Shell are poised to regain a foothold in the Iranian energy sector once sanctions are lifted.

The author is a contributing analyst at Wikistrat, Fellow at China Cooperative, and a freelance writer. His work covering China, Iran and the Middle East has previously been published at the Asia Times, International Policy Digest, Real Clear Defense and other publications. He graduated from King’s College London with a Masters in Middle East and Mediterranean Studies, focusing on Chinese-Iranian relations, and earned his Bachelors of Arts in History from Elizabethtown College.
Advertisement
Subscribe for our daily newsletter