The Declaration of Independence is a document that outlines why the creation of the State of Israel was legitimate. 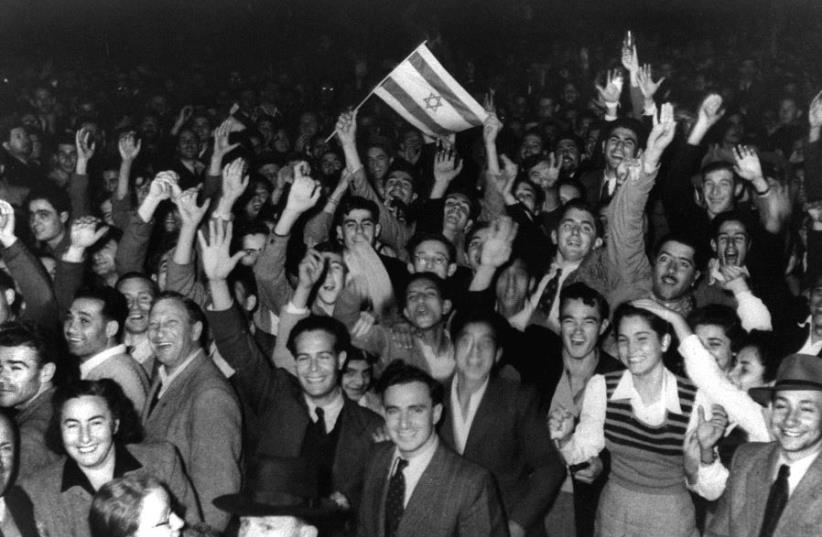 Jews celebrate in the streets of Tel Aviv moments after the United Nations voted on November 29, 1947, to partition Palestine which paved the way for the creation of the State of Israel on May 15, 1948.
(photo credit: REUTERS)
Advertisement
I was brought up on the ethos that when the United Nations passed the “partition plan” on November 29, 1947, Jews all over mandatory Palestine and around the world danced in the streets.There was a sense that finally the world recognized that the Jews had a right to go home.On November 30, 1947, Haaretz’s lead story read: “The adoption of the partition resolution by the General Assembly was received by the Jewish community with great joy and thousands went out to the streets to celebrate, even though it was clear that the Arab states and the Palestinian Arabs would embark on a relentless war against the realization of the plan to establish a Jewish state.”Davar, one of the leading newspapers of the time, wrote: “The partition map proposed by UNSCOP allotted the Jewish state only a small part of Western Palestine. Despite this fact, the Zionist Organization and the institutions of the Jewish community in Eretz Yisrael agreed to accept the plan, since it recognized the right of the Jewish people to a state and not only a ‘national home’ as stated in the 1917 Balfour Declaration and the 1922 Mandate for Palestine.”David Ben-Gurion, at a gathering at the Jewish Agency in Jerusalem, called for everyone gathered to sing “Hatikva.” Jewish Agency official Golda Meyerson (Meir) announced to those Holocaust survivors still languishing in DP camps in Europe that “together with us, you will live in a free Jewish state.”Six months later Ben-Gurion declared Israeli independence and stated, “On the 29th November, 1947, the United Nations General Assembly passed a resolution calling for the establishment of a Jewish state in Eretz Israel; the General Assembly required the inhabitants of Eretz Israel to take such steps as were necessary on their part for the implementation of that resolution. This recognition by the United Nations of the right of the Jewish people to establish their state is irrevocable. This right is the natural right of the Jewish people to be masters of their own fate, like all other nations, in their own sovereign state.”He further stated: “The State of Israel is prepared to cooperate with the agencies and representatives of the United Nations in implementing the resolution of the General Assembly of the 29th November, 1947, and will take steps to bring about the economic union of the whole of Eretz Israel. We appeal to the United Nations to assist the Jewish people in the building-up of its state and to receive the State of Israel into the comity of nations.”The Declaration of Independence is a document that outlines why the creation of the State of Israel was legitimate. Israel’s international legitimacy was mandated in the November 29, 1947, UN decision.But we were not alone. The UN decision stated: “Independent Arab and Jewish states and the Special International Regime for the City of Jerusalem....shall come into existence in Palestine two months after the evacuation of the armed forces of the mandatory Power has been completed but in any case not later than 1 October 1948.”Ben-Gurion didn’t mention the creation of an Arab state in Palestine in the Israeli declaration of independence. But Yasser Arafat did when he read the Palestinian Declaration of Independence written by Palestinian national poet Mahmoud Darwish: “Despite the historical injustice inflicted on the Palestinian Arab people resulting in their dispersion and depriving them of their right to self-determination, following upon UN General Assembly Resolution 181 (1947), which partitioned Palestine into two states, one Arab, one Jewish, it is this Resolution that still provides those conditions of international legitimacy that ensure the right of the Palestinian Arab people to sovereignty.”Not only did the UN decision provide legitimacy for the existence of the Jewish nation-state, it recognized that there are two peoples in Palestine and in order to resolve the conflict between them, there must be two states for two peoples. Seventy years later, this has not changed. What has changed is a struggle in the West regarding Israel’s legitimate right to exist and the legitimate need for enabling the Palestinians nation-state.Even after 70 years only one part of the UN decision has been fulfilled. Yes, it is true: the Palestinians rejected the partition plan and paid a very painful price for their rejection. That is primarily why the whole world is prepared to recognize the State of Israel in the borders reached following its war for independence in 1949 (78% of the land between the River and the Sea) and not the UN partition plan borders which would have granted the Jews a much smaller piece of Palestine. Neither the Palestinians nor the world are prepared to allow the Palestinians to be left without any sovereignty in any part of Palestine.Just as accepting the partition plan in 1947 was a painful but necessary compromise to enable Israel to exist, the same need for compromise is still valid today. November 29 has always symbolized for me a day of national celebration. November 29 should become an official day of national celebration – a holiday which could be shared by both people living between the River and the Sea – but that will only be possible when we complete the fulfillment of the resolution and partition the land into two states for two peoples.The author is the founder and co-chairman of IPCRI – Israel Palestine Creative Regional Initiatives (www.ipcri.org). His new book In Pursuit of Peace in Israel and Palestine has been published by Vanderbilt University Press.