Encountering Peace: The democracy of Palestine

If there is one thing clear as day, it is that the Palestinian people in Gaza and the West Bank want to have their say on their leadership in a democratic way. 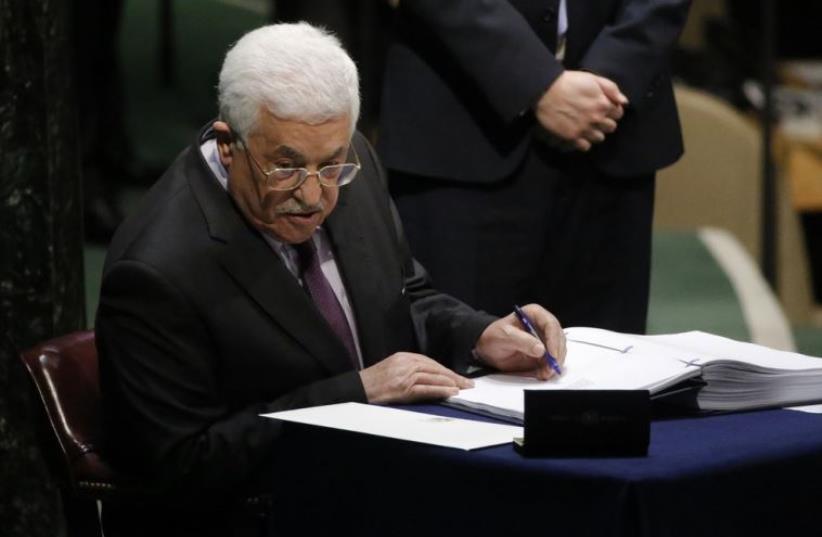 Palestinian Authority President Mahmoud Abbas signs the Paris Agreement on climate change at UN headquarters in New York
(photo credit: REUTERS)
Advertisement
On October 8, 2016, municipal elections are to be held by the Palestinians throughout the West Bank and Gaza Strip. The public is getting very geared up for the process. There is no doubt that the Palestinian Authority was taken by surprise by the Hamas announcement from Gaza that Hamas agreed to participate in the elections, not only in the West Bank but also in Gaza. The initial response in the West Bank was almost panic. The immediate projections and assessments of a sweeping Hamas victory in the West Bank led many to predict that the elections would not take place, while others offered advice to Fatah to find ways of canceling the elections, but in doing so to place the blame squarely on Hamas.If there is one thing clear as day, it is that the Palestinian people in Gaza and the West Bank want to have their say on their leadership in a democratic way, and the great hope is that municipal elections will lead the way to new national elections for president and parliament.The belief, or more correctly, the hope is that new national elections will lead the way to renewed Palestinian unity, putting an end to the almost decade old split of the Palestinian house between Hamas and Fatah, between the West Bank and Gaza.Palestinian municipal elections are based on proportional outcomes. It is not winner takes all. There will be no decisive victor in these elections. Additionally, Hamas will not run under the banner of Hamas, rather under some other title, as it did in the national elections in 2006 – then under the title “Change and Reform.”There will be no Hamas party platform even hinting at the Hamas covenant. Many of the candidates on the Hamas-supported lists will be non-Hamas-identified personalities; local leaders, civil activists, businessmen, academics, doctors, lawyers, mosque-goers and good-doers in their communities.Fatah may also not run direct Fatah lists, but rather local lists of people who will be supported by Fatah.In one case, in Nablus, Fatah declared its support for a person who in previous elections ran for mayor on behalf of Hamas. He was not Hamas or Fatah then, nor is he now – he is well known and respected local businessman Ali Yaish. There are also those running who in the past were known to be Fatah representatives, such as former Nablus mayor Ghassan Shaka, who was even a member of the PLO Executive Committee on behalf of Fatah, and has now declared that he is running as an independent, even announcing that he is running against Fatah. This round of elections has also brought unity to the small, splintered Palestinian Left, and a joint list of the Popular Front, the Palestinian People’s Party and FIDA will run together.Palestinian pollsters and experts already predict that Hamas will do better in the West Bank than in Gaza, and Fatah will do better in Gaza than Hamas. This seems to be the working assumption in both Hamas and Fatah camps. People in Gaza are less likely to support Hamas because they have been living the consequences of the Hamas victory in 2006. People in the West Bank have been living the consequences of continued Fatah rule since Arafat’s return in 1994 and it seems that a large majority of them very much want a change. Wanting change is natural, especially when the same people and politics have been in control for so long. It seems that these upcoming elections will have a lot less to do with political visions and their reflections on the Israeli-Palestinian conflict than the realities of everyday life, and public services or lack thereof.There will also be increased women’s participation, especially in the West Bank. Palestinian radio shows, on the official Voice of Palestine as well as on many other private Palestinian radio stations are filled with programs including call-in shows about local government issues, municipal services, the state of roads, economic development, voter registration and the importance of participating in these elections. Women members of local governments from the past elections in 2012 have been interviewed extensively and have called on women not only to vote, but also to run in the elections. The outgoing mayors of Ramallah and Bethlehem are women and more women should be expected to be represented in local government after October.Many local lists will also be formed and supported in more traditional manner, especially in villages around the West Bank – on the basis of extended families and tribes. In many families there are supporters of both Fatah and Hamas. Perhaps the most well known in Israel is the family of long-time Fatah leader Jabril Rajoub and his Hamas leader brother Nayef. They originate from the village of Dura in the south Hebron hills region. I don’t know if the Rajoub family will come together to support one united, family-tied list, but this will happen throughout the periphery of the main cities in the West Bank.There are many people in Fatah and Hamas who would prefer to see these elections canceled. I have heard proposals of trying to run elections in neighborhoods of east Jerusalem, knowing in advance that Israel will not allow that and thereby having legitimate cause for canceling them. There is no doubt that this democratic process poses risks, certainly to the Palestinian Authority. On the other hand, the democratic process is badly needed and I certainly hope that the best candidates and lists will be elected to serve the people who vote for them. Palestine needs new leadership and perhaps that new leadership will spring from these elections.The author is founder and co-chairman of IPCRI, the Israel Palestine Creative Regional Initiatives. www.ipcri.org.