The US Congress works to pass the HEAR act 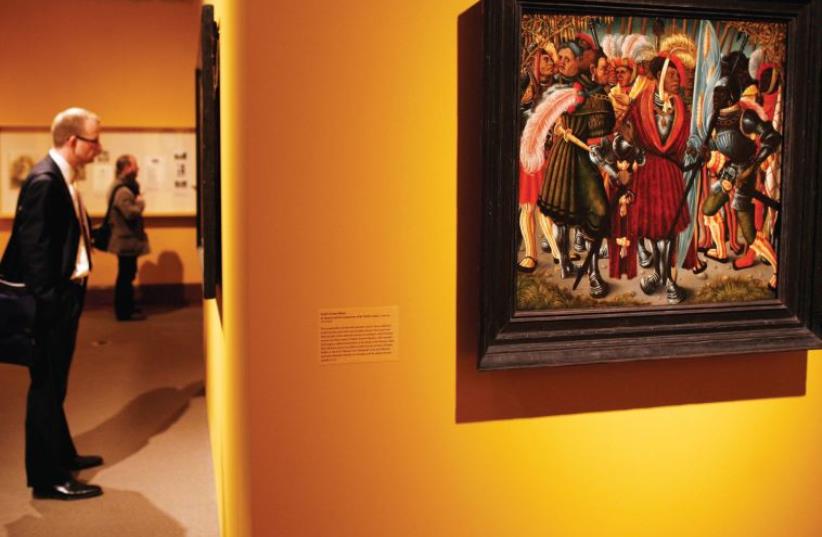 THE PAINTING ‘St. Maurice and His Companions of the Theban Legion’ by an unknown South German artist is displayed in an exhibition of Old Master paintings entitled ‘Reclaimed: Paintings from the Collection of Jacques Goudstikker’ at the Jewish Museum in New York, 2009.
(photo credit: SHANNON STAPLETON / REUTERS)
Advertisement
Earlier this week, a grateful America honored the 72nd anniversary of the Allied invasion of Normandy, which began the long offensive to defeat Nazi Germany.Thousands of brave men, most of them far from their homes, made the leap of faith out of their boats and into the water – then onto the beaches to fight their way across Europe, fortified by the belief that their cause was just.Each year, the solemn World War II anniversaries become more poignant, as there are fewer warriors left who actually lived through it; increasingly, these events are the stuff of history rather than of living memory. The courage of our “greatest generation” remains inspiring and humbling, but risks seeming unattainable today – something of another time and place.As we say our long good-bye to the heroes of WWII, our final duty to them is to remember that the cause for which they fought isn’t a historical abstract. Evil hasn’t vanished. Aggressive, totalitarian regimes fueled by genocidal zealotry for which Holocaust denial is the content of tweets and cartoons are gaining strength. Anti-Semitism remains a virulent force in our own academic and cultural institutions.Now more than ever, it is imperative that we don’t forget the atrocities these forces have committed in the past, as we continue the fight against them today.For this reason, I am pleased and honored to work with my Senate colleagues on both sides of the aisle to advance the Holocaust Expropriated Art Recovery (HEAR) Act. Co-sponsored by fellow my Texan Senator John Cornyn (R-Texas), as well as senators Chuck Schumer (D-New York) and Richard Blumenthal (D-Connecticut), this legislation creates a uniform federal statute of limitations to facilitate claims for the recovery of artwork stolen by the Nazis.Cultural appropriation was an integral component of the Third Reich’s genocidal project to rid Europe, and then the world, of Jews. Confiscating the possessions of their victims, and then erasing their provenance, was standard practice. The more valuable and historically significant these objects were, the better. While this practice was not unique to the Nazis, they implemented it on an unprecedented scale in what has been called “the greatest displacement of art in human history.”Works deemed acceptably Aryan in nature went into the state collection (or the personal collections of Hitler’s associates), while the so-called “degenerate” works that were modern, Jewish, or Communist in origin were to be destroyed, although a curious number of these theoretically immoral objects were spirited away into bank vaults or other means of safekeeping.While in the aftermath of the war many works of art were repatriated to their original owners, a large number were not. Generally kept secret, their histories faded until subsequent generations, either ignorant of their original ownership or hoping it had been forgotten, sold them. Some objects found their way into public collections, where they might be identified by their owners’ heirs, who could then attempt to reclaim them.It is troubling that the HEAR Act is needed at all, but the turmoil of the Holocaust and a world war, followed by a Cold War that lasted another 50 years, made it especially difficult for Holocaust victims and their families to locate and prove ownership of their stolen works. That difficulty is compounded by the possibility that their claims will never actually be decided, but will instead be thrown out of court because it took too long to file the claims in the first place.The HEAR Act will help ensure that claims for restitution of Nazi-looted art are resolved based on the facts and merits, and are not short-circuited by technical or non-merits legal defenses, like truncated state statutes of limitations, that work to the disadvantage of the families of Holocaust victims.Although more than 70 years have passed since the Holocaust, it is never too late to do the right thing.The HEAR act sends a clear signal that we continue to reject every noxious vestige of the Nazi regime, and I look forward to working with all my colleagues in Congress to pass it into law