At the end of the “Escape the Nazir” activity, counselors used the opportunity to educate the teens/pre-teens on the effect of alcoholism. 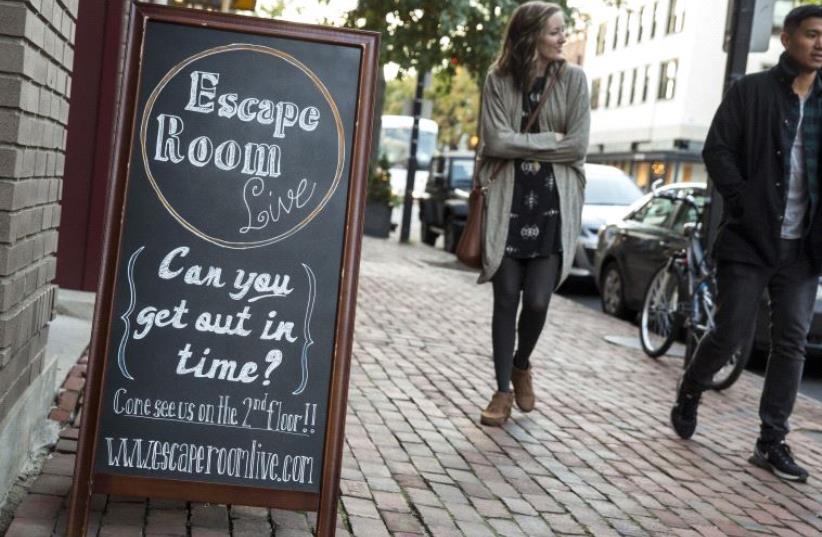 Pedestrians pass the Escape Room Live in Alexandria, Virginia October 17, 2015.
(photo credit: REUTERS)
Advertisement
This past summer, a group of adolescent campers and their counselors partook in the “Escape the Nazir” activity at the Jerusalem Puzzle Quest in Talpiot, Jerusalem.While the kids were enjoying the activity, unbeknownst to them they were also gaining a unique perspective on a difficult issue.In the past five years, escape/quest rooms have proliferated throughout the globe.While the first real-life escape is reported to have started in 2006, to date over 5,200 escape rooms have opened up in over 1,000 cities in 88 countries. In Israel, the fad has gained tremendous popularity, as the opening of the first escape room in mid-2014 has mushroomed to over 300 rooms per Bookescaperoom.co.il.The appeal of the escape room is easily discernible. The activity is popular with multiple demographics due to the combination of collective mental adrenaline produced and the small amount of physical exertion needed. A group of teenagers or college students can participate together.Parents can make birthday parties for their adolescent children. A small room is a perfect date-night activity, while a bigger room can host a multi-generation family or a company get-together.But are escape rooms just a fun activity? Could there be more value to them than the simple get-together of family, friends or colleagues? True, many rooms capitalize on the fun aspects, via themes that ask participant to find some hidden treasure or avoid a serial killer. Other rooms capitalize on their location’s historical value.However, there is another aspect to escape rooms: experiential learning. Experiential learning has been cited by the global management and consulting firm McKinsey & Co. as the “most effective means of providing skills.” The AMIT schools network in Israel, recognizing the value of experiential learning, has incorporated this teaching methodology, thereby allowing it to take teaching to a higher level in a way recognized by the Education Ministry. Joel Glazer, a history teacher for over 40 years at the Bruriah High School for girls in Elizabeth, New Jersey, has used role-playing and simulated experience as a core part of his teaching approach. This has resulted in students never forgetting the experience and historical effect of the character or role they played.At the end of the “Escape the Nazir” activity, counselors used the opportunity to educate the teens/pre-teens on the effect of alcoholism.As the premise of the activity is an alcoholic who has locked his wine bottles in a closet using difficult locks and codes, while becoming a nazir (Nazirite) to overcome his struggle with alcoholism, the activity (which was vetted by an Alcoholics Anonymous representative) was used as a way of showing the campers potential erratic behaviors resulting from alcoholism. Indeed a lively discussion ensued after the activity regarding the message behind the scenes. In addition to alcoholism and the general fun outings, Jerusalem Puzzle Quest has facilitated sessions on organizational interdisciplinary development, proper and improper property protection and general communication.The result of a quick, massive proliferation of escape rooms has led many to question what the future of the industry will be. Clearly, an opportunity exists for companies, schools and camps to capitalize on the learning opportunities the sector has to offer.

The author is the founder of the Jerusalem Puzzle Quest.
Advertisement
Subscribe for our daily newsletter