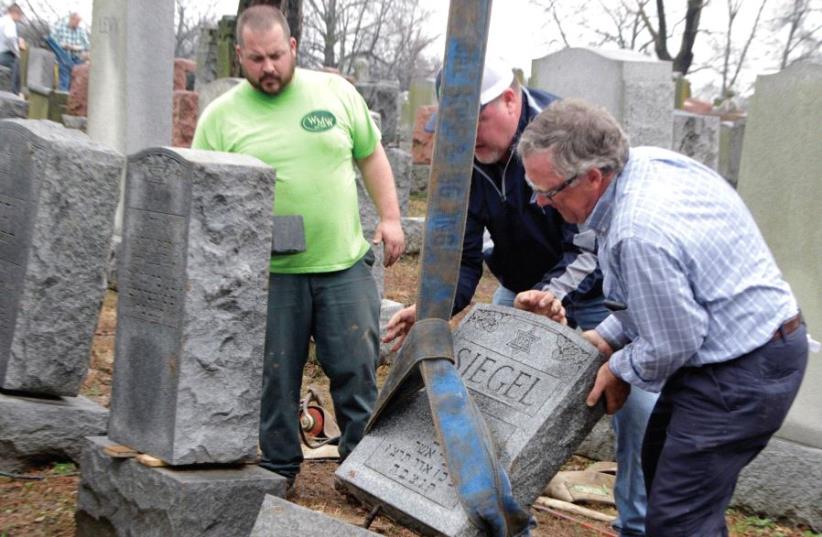 Toppled Jewish headstones after a weekend vandalism attack on Chesed Shel Emeth Cemetery in University City, a suburb of St Louis, Missouri
(photo credit: REUTERS)
Advertisement
This is a message I shared with the Temple Beth-El (Birmingham, Alabama) community in the wake of last week’s bomb scare at the local JCC: Fellow members of the Temple Beth-El community: Experiencing something first-hand always has a greater impact than just reading about it. I went to the Levite Jewish Community Center after minyan this morning to work out, and wasn’t able to because there was a bomb threat in progress. Kids had to go out into the cold and rain. Lives were disrupted. Public resources were wasted, as we had several police cars present as well as a fire truck (just in case).I stood out in the cold with some of the staff members for a while. Maybe we were a little too complacent – if we really thought there was a bomb in the building, we wouldn’t have been standing so close to the building, under the awning by the main entrance. If the police thought there might really be a bomb in the building, hopefully they wouldn’t have ALLOWED us to stand that close to the building.The most upsetting thing to me wasn’t that my workout was interrupted – that’s certainly small potatoes. What was upsetting was hearing the woman who answered the phone when the hate-filled message arrived. She was clearly upset, and I was upset hearing the actual words and threats made by the caller.But we must get past our fears. Love is stronger than hate.These are not “prank calls.” Prank calls are random acts of harassment. These calls are acts of hate. These calls – and we weren’t the only one, 16 other Jewish centers around the country were also targeted today – are planned, coordinated acts of antisemitism, just as the desecration of Jewish cemeteries in St. Louis and Philadelphia are acts antisemitism.Personally, I sometimes feel confused by antisemitism. I’m a Jew, and I know that Jews are kind, generous, capable, and contribute to the betterment of the world way out of proportion to their small numbers.Why would anyone hate us? Antisemitism is a complex brew of fear, envy and unease with people who are “different.” We have a lot of customs that set us apart from our neighbors, ranging from the choices of what we eat at the barbecue, to waving agricultural products around in the air every fall, to living on crackers for a week every spring, or not working on Saturday.I believe it’s more important than ever that we affirm our Judaism, proudly and publicly; that we cling to our quirky customs as a badge of pride. Because doing so – while at the same countering hate with love – will contribute to the betterment of the world.We need a world where all are accepted, regardless of how they pray, what they wear, or whom they love. The answer to hate is not to assimilate and become just like them. The answer to hate is not to hate others in return. The answer to hatred is to refuse to demonize ANY other group, to remain who we are, while setting a good example living two of the most important commandments we have: “Love your neighbor as yourself” and as the sage Hillel put it, “what is hateful to you, do not do unto others.”Be a “visible Jew” and go to events supporting other minority groups, whether it’s Muslims, African-Americans, refugees or immigrants. Be a light to the nations. Set a good example of love, acceptance and compassion.And support our communal institutions that are under attack. Join the JCC. Send your kids to the preschool there. Send your kids to the day school.All of the Jewish institutions in Birmingham have security measures in place. We should all cultivate the Israeli attitude toward attacks on our community: a refusal to allow attacks to disrupt our lives. To be a “stiff-necked people” and insist on living life as usual in the face of those who would disrupt our lives, to refuse to give those who hate us a victory.B’virkat shalom (with blessings of peace),
Rav Barry The writer, a rabbi and businessman who normally makes his home in Jerusalem, is on an interim assignment as a congregational rabbi in Birmingham, Alabama.
Advertisement
Subscribe for our daily newsletter