Fascism will fail in the US because of ‘We the People’

According to the great abolitionist who escaped the chains of bondage, Frederick Douglass, “Power concedes nothing without a demand. It never did and it never will.” 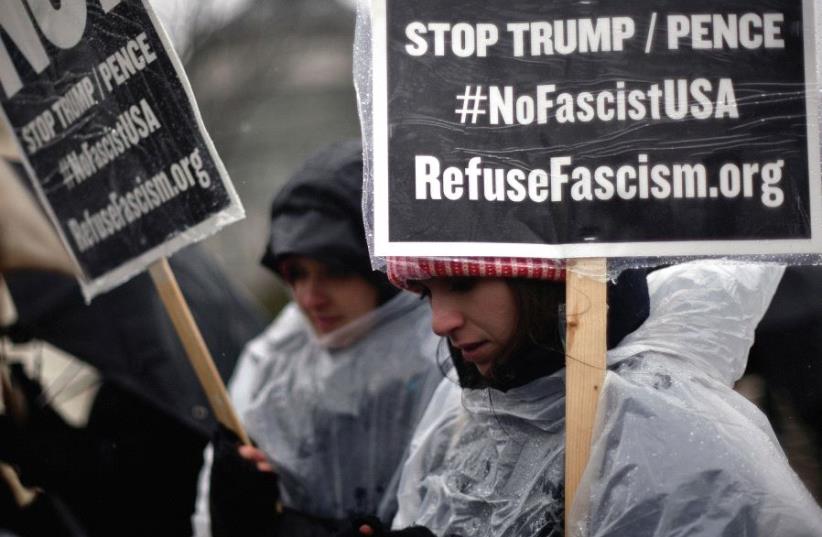 A PERSON protesting ‘fascism’ at a rally in New York City.
(photo credit: REUTERS)
Advertisement
We have long since past the point where it is merely hyperbole to compare the rise and control of the Nazis in the 1920s and 1930s to the rise and possible total take-over of fascism in the United States and in some other countries around the world.In both Nazi Germany and in US-style alt-right fascism, strong leaders whipped up dehumanizing stereotypes resulting in the scapegoating of already-marginalized groups of people for causing past problems and posing clear and present dangers to the state.The difference, however, between the rise of the European fascists and the ultimate defeat of the Trump regime in the not-too-distant future is that while relatively few individuals and national leaders stood up early to the fascists by forcefully speaking out and intervening, the unprecedented outpouring of resistance, protest and intervention by individuals and entire nations guarantees the balance of power will soon rest back with “We the People.”Donald Trump represents the mouthpiece of the alt-right in spreading his alt-facts within his alt-reality universe. The political Center and Left telling the truth in actual reality serves as the antidote to fascism. In his own perverse way, Trump has acted as the catalyst sparking the connections and coalitions between people of disparate social identities who maintain similar philosophies of social change and social justice.Not intending to get too deeply into the weeds of social theory, but exposed and disputed in the work of French philosopher, sociologist and literary theorist Jean-François Lyotard, and other postmodernist thinkers, was the concept referred to as the “meta-narrative,” “master narrative,” or “grand narrative” explanation of human knowledge and historical experience.This “meta-narrative” constructs human history as a linear developmental tale emphasized by consistent movement forward to the (singular) inevitable and sustainable goal of “progress.” In other words, the history of society is one of continuing progress. Each human generation gets better than those going before in terms of knowledge and progress.If, as some who hold to the meta-narrative claim, that progress moves inevitably and invariably forward, if people believe “I think we’ll slowly get over this,” then individuals and entire societies are more likely to relinquish their responsibility in challenging forms of inequities because all inequities will inevitably disappear, since history itself will ensure “progress.”Theorists like Lyotard, however, dispute the mega-narrative historical view as being not merely overly optimistic and simplistic, but also as inaccurate and dismissive of the great variety and diversity of human experience. The meta-narrative also perpetuates dominant group hegemony by valorizing dominant discourses of “truth” and marginalizing other forms of knowing.According to the great abolitionist who escaped the chains of bondage, Frederick Douglass, “Power concedes nothing without a demand. It never did and it never will.”History shows us that process, rather than moving forever forward in a linear fashion, deploys more like a continuing spiral stretched out. We commence our travels forward, and then we begin to circle up, back, then down, then we continue the process over and over again through time. But as we begin moving forward on each consecutive revolution of the spiral, we stand a bit further ahead, further onward than we did at the previous cycle.The march toward social justice, therefore, cannot be represented as a continually forward procession, but rather, it advances and retreats. With each retreat, though, we stand closer to our goals than we did previously. The metaphor represents the movement of individuals, nations and the world at large.Possibly this is what Rev. Dr. Martin Luther King Jr. was imagining when he told us that “[t]he arc of the moral universe is long, but it bends toward justice.”