Flags in the square

Israelis, who were voicing demands from the Israeli government as citizens, weren’t waving the flag of the country on which they were making these demands - They were waving the Palestinian flag. 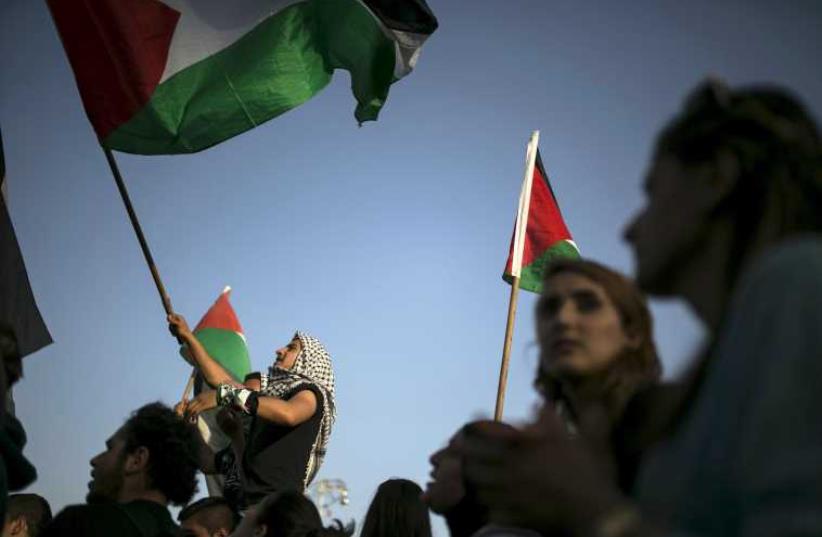 Israeli Arab protesters in Rabin Square in Tel Aviv wave Palestinian flags
(photo credit: REUTERS)
Advertisement
The Joint Arab List recently organized a demonstration in Tel Aviv’s Rabin Square. There’s nothing wrong with that. The square has seen a lot of demonstrations, and there will be more to come. Anyone who wants to show solidarity or protest, to support or oppose, is invited. You can wave signs, shout slogans, and when it’s over, you can enjoy a drink or a bite to eat at one of the many fine bars and restaurants in the city.Still, there was something different about this particular demonstration, something that distinguished it from the demonstrations of other citizens. This time, Palestinian flags were raised. In this protest, Israelis, who were voicing their demands from the Israeli government as citizens, weren’t waving the flag of the country on which they were making these demands. They were waving the Palestinian flag.The more savvy among the organizers knew it was a mistake. The statement made by the Palestinian flag was much more emphatic than anything that was said at the demonstration. What is more, it no longer mattered what was said – the message was clear. But even those who understood this couldn’t hide the truth. They couldn’t make it go away: their constituents were waving it in the air. Their community has been subject to incitement for so long that they can’t be expected to pretend to be something different for the sake of public relations.In retrospect, the Arab leadership has been the cause of injustice for decades, doing a disservice first and foremost to its own public. It began as far back as the War of Independence. People with means fled the country, urging those left behind to continue the struggle. Promises about Arab armies that would come and throw the Jews into the sea were issued liberally. If the Arab leadership at that time had been more moderate, the Palestinians would now have a country of their own which celebrated the same birthday as Israel. They are still paying the price for what they brought on themselves.Nothing has changed since then. It isn’t the well-off Arab members of Knesset who are bearing the brunt of the cost. Their constituents, most of whom just want a normal life, are paying the price for their leaders’ unconditional identification with the enemies of Israel, for their sparring among themselves for the title of most extreme, most hostile to the country that pays their salary.When other Israeli citizens see them waving Palestinian flags, many say to themselves: that’s what you want? That’s your flag? Fine, we’re willing to help. Stay where you are and we’ll move the border. If your loyalty is to that flag, if you have pinned your fondest hopes on it, then be our guest. Those of you who live near the Green Line can follow your heart and be annexed to the Palestinians. That way you’ll be able to wave the flag with good reason.If they were actually demanding to live under the Palestinian flag, like the Sudeten Germans in Czechoslovakia who wanted to be part of Germany, it would be a sign of self-respect. But the Israeli identity card, the one issued by the Zionists with the blue-and-white flag, is too precious to them. They want to have their cake and eat it too.There are three things here: the Palestinian flag, the Israeli standard of living, and self-respect. It’s not possible to have more than two of them at the same time.

Translated from the Hebrew by Sara Kitai, skitai@kardis.co.il.