From one American to another: Tell it like it is, Mr. President

As someone who grew up saying the Pledge of Allegiance every morning, I feel like I can speak to you as one American to another. 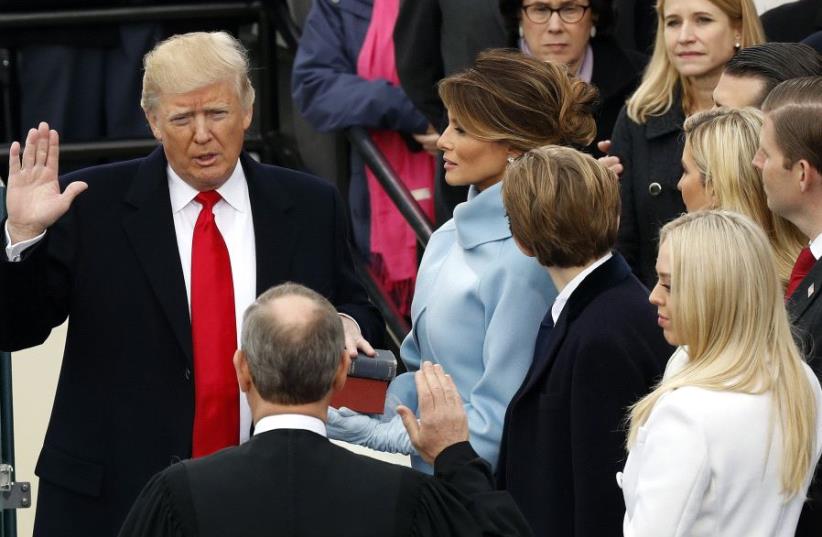 Donald Trump is sworn in as the 45th president of the United States of America.
(photo credit: REUTERS)
Advertisement
Dear President Trump, Welcome to Israel. As someone who was born and spent most of his life in the United States and then served in the Israeli Knesset, I feel a special pride when a US president visits Israel. And as someone who grew up saying the Pledge of Allegiance every morning, I feel like I can speak to you as one American to another.I applaud you, Mr. President, for the words you shared with the world in Saudi Arabia two days ago. You made a clear distinction between good and evil in the world, and called on the forces of good to defeat the forces of evil.That distinction between the forces of good and evil is on display here in the Holy Land, Mr. President. The terrorism of Islamic extremism which you charged the free world to drive out exists right here in the heart of Israel. And we need your help to defeat it.Make no mistake about it Mr. President – Israel is the force of good in this land. Yes, we have our flaws, as all countries do. But this is the only country in the Middle East where people of all faiths can worship freely. The Knesset has a room for Muslim prayer, and 20% of Israel is Arab with full democratic rights. As I wake up this morning, Palestinians from the West Bank arrive to work on construction sites on my block, from where they turn to Mecca to bow in prayer throughout the day.Israel also provides medical care for people throughout the region, includ- ing leaders of Hamas and other sworn enemies of the Jewish state. Just to provide two examples out of many: Israel provides life-saving heart surgery for children from Africa via an organization called Save a Child’s Heart, and brings electricity, water and life-saving medication to children throughout Africa via an organization called Innovation Africa. Israel provides equal rights and opportunities for women and Israel is the only country in this region where homosexuals can live openly and freely. Israel educates its children to seek peace and praying for peace is at the heart of our prayer services three times a day.This, Mr. President, is in stark contrast with the Palestinian territories which you will visit today. If we succeed in coming to an agreement with the Palestinians and establish two states for two peoples, then for reasons that no one has been able to explain to me, Jews will not be allowed to live in the Palestinian state. There will be no freedom of religion there. Homosexuals and women will be discriminated against; the children in the Palestinian Authority school system are taught to hate Jews and inspired to kill Jews.There can be no greater example of good vs. evil, Mr. President, and you may be the only person in the world who can do something to defeat the evil which exists in the Palestinian territories – by telling the Palestinian leadership that you will do nothing to help their national aspirations until they choose the side of good and demonstrate this choice in action. President Mahmoud Abbas and his people must be told that no steps will be taken toward negotiations and a Palestinian state until all incitement to violence ceases within the Palestinian Authority. An environment must be created in which Jews and Christians will be able to walk and worship freely in Palestinian areas. They must demonstrate that women and people from all persuasions can live as they choose. And they must openly acknowledge the right of the Jewish People to live and thrive in a Jewish state in the land of Israel.The Palestinian leadership must show you once and for all that they choose the side of good and reject the side of evil. Once that happens – the sky is the limit as to what they can achieve, and the road can be paved to a Palestinian state living peacefully alongside Israel.Mr. President, we both grew up with the American superhero, Superman, teaching us the values of “truth, justice, and the American way.” You are now in the position of being a superman who can bring peace to this region. As the father of an Israeli soldier, I can tell you that we in Israel want peace more than you can imagine. But in pursuing this goal, I plead with you to guide yourself with those values, and demand them from the Palestinians as well.Truth – do not allow President Abbas to fool you with words. Demand action. Justice – do not allow the Palestinians to suggest that their terrorists whom they honor and reward are “freedom fighters.” Call them out as the cold-blooded murderers whom they are, who must be brought to justice and not revered. The American way – freedom and equality for all in the Palestinian territories, the ultimate sign of choosing good over evil.Good luck to you in your meetings with the Palestinian leadership, Mr. President. Please stay true to our joint core values, and use truth and justice as your guiding light when demanding a massive overhaul and change on the Palestinian side as the first step toward healing the terrible wounds which exist in the Holy Land.