A nation’s justice system is supposed to reflect and enforce society’s values and norms. 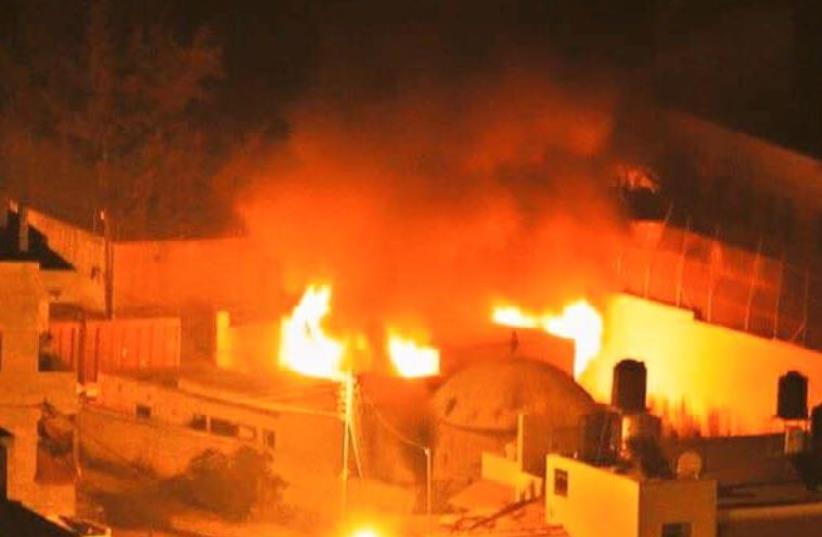 Joseph's Tomb set ablaze by Palestinian rioters ‏
(photo credit: Courtesy)
Advertisement
Defying any sense of fairness or logic, an Israeli military court earlier this week provided a mortifying example of why Palestinian terrorists have little to fear from the country’s justice system.Despite confessing to opening fire on a group of Jewish worshipers at Joseph’s Tomb in Shechem (Nablus), which left one Israeli dead and four others injured, Nuaf Auda was sentenced to just six years in prison.The leniency of his punishment is simply incomprehensible and underlines the need for the Jewish state to take a tougher line on how terrorists are penalized for their actions.Back in 2011, during Passover, a group of Israelis entered Shechem in a vehicle to pray at the biblical shrine in the city. They neglected to coordinate their visit with the IDF, which the army requires because the city is under Palestinian control.It was then that Auda and his accomplices, all of whom were Palestinian policemen, took chase in their police car.Instead of firing warning shots or simply calling for back-up, the Palestinian perpetrators aimed their weapons at the Israelis and shot them.The Shin Bet later said that “during questioning, the suspects confessed to firing on Israeli vehicles despite the fact that their lives were not at risk.”The gunfire killed Ben Yosef Livnat, a 25-year-old father of four young children and the nephew of then-culture and sport minister Limor Livnat.Following the shooting, Auda and his partners in crime spread rocks on the road to make it appear as if they had been the victims of stone-throwing and had no choice but to fire in self-defense. As a result, the judge convicted him of obstruction of justice and tampering with evidence.But the court chose to acquit Auda of intentional manslaughter, because of alleged doubts about which Palestinian policeman fired the specific bullet that put an end to Livnat’s life and left his children orphaned.Chaim Bleicher, an attorney from the praiseworthy Honenu legal aid organization that assists terrorism victims and their families, rightly protested the outrageous sentence, telling reporters: “The verdict that acquitted the defendant of a shocking murder has no basis in the evidence and facts presented in court.”“The defendant,” Bleicher pointed out, “explicitly admitted that he shot at the victim’s vehicle and even admitted that he hurt him. In addition, a bullet was found in the victim’s vehicle which matched the trajectory indicated by the defendant in his confession.”Inexplicably, that wasn’t enough for the military magistrate overseeing the trial, who gave Auda the equivalent of a slap on the wrist in light of the severity of his crime.In the process, he also delivered a slap in the face to the Livnat family, which not only lost a husband and father, but must now contend with the injustice of his murderer’s sentence.Sadly, this is hardly the first instance in which Palestinian terrorists have been treated with kid gloves by the Israeli justice system.In February, an Arab youth who was part of a group that ambushed three Jewish youths in the Old City of Jerusalem five years ago was sentenced to community service even though he had blinded the eye of one of his victims.And back in October, the Jerusalem Magistrate’s Court sentenced Sheikh Omar Abu Saraa to just eight months in prison for incitement to violence, after he gave a sermon on the Temple Mount in which he declared, “The Jews are the most evil of Allah’s creatures. They are the most evil creatures that have ever been on earth... I clearly say to the Jews: The time has come to slaughter you. The time has come to wage war with you. The time has come to kill you. Inshallah, we are ready.”The light sentences being meted out to Palestinian terrorists and those who incite to kill should shock anyone with a conscience.Such leniency is inherently unjust, fails to deter Palestinian terrorism and does not sufficiently punish those who resort to violence.Indeed, it cheapens the value of Jewish lives, as though the murder of a Jew warrants little more than half a decade behind bars, air-conditioning and cable TV included.It is time that Israel’s courts begin imposing much harsher prison terms on terrorists who aim to cause death or bodily harm. Any Palestinian contemplating the use of violence needs to know that he will be punished severely and lengthily for his actions.After all, a nation’s justice system is supposed to reflect and enforce society’s values and norms while protecting the innocent from those who would do them harm.By this measure, the light sentences that are being handed down to Palestinian terrorists are clearly failing us all.