There will be plenty of time and opportunities for future historians and analysts to assess the totality of the individual, his accomplishments and failings. 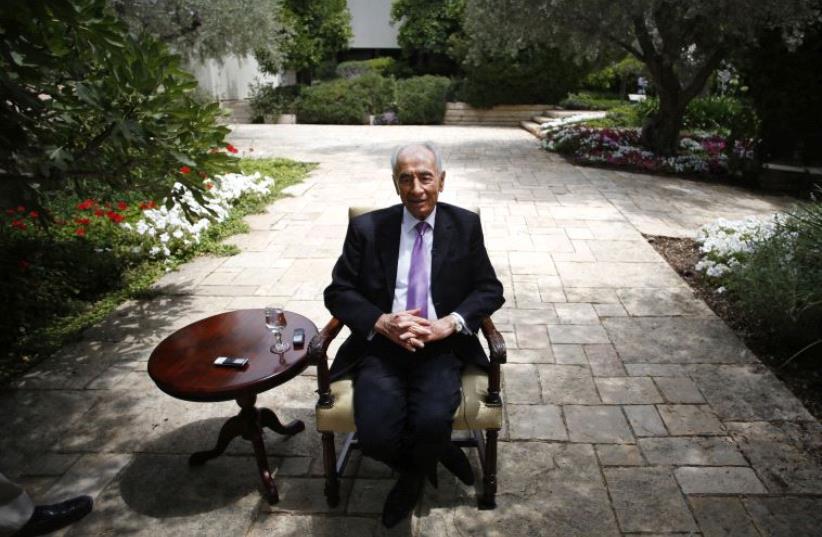 Shimon Peres during an interview with Reuters at his residence in Jerusalem, June 2013
(photo credit: REUTERS)
Advertisement
The demise this week of former president and prime minister Shimon Peres, who served as one of the last living links with the heroic generation that founded this country, is a milestone event, the kind of moment in a nation’s life that cannot but evoke collective and personal introspection.In death, as in life, Peres remains an intriguing conundrum. Few historical figures have left such an indelible and undeniable mark on the nation they helped to forge and lead, leaving behind a complicated legacy that stirs up a broad range of sentiments among differing sectors of the population.For those of us on the Right, in particular, Peres’ career encompassed a complex array of actions, prompting many to wonder how best to remember the man and his legacy.Consider the following: As defense minister in 1974, Peres played a key role in the revival of Jewish settlement in Judea and Samaria.Despite opposition from prime minister Yitzhak Rabin, Peres pushed for and granted the approval for the establishment of Ofra, north of Ramallah, which is now a thriving community of more than 3,000 Jews.There is a well-known photo of Peres planting a tree at the site, and it is said that the sapling remains in place until today.And yet, barely two decades later, in 1993, Peres served as one of the architects of the Oslo process, which ultimately sought to undermine the very same Jewish presence in the territories that he had previously championed.The Jewish presence in the holy city of Hebron also owes a debt of gratitude to Peres.In an interview last year with the Israeli news site Walla, Hebron Jewish community spokesman Noam Arnon told a remarkable story about a meeting with Peres that took place toward the end of 1975, when he was part of a delegation of Jews headed by Rabbi Moshe Levinger who went to see the defense minister.At the time, the Jewish community of Kiryat Arba, adjacent to Hebron, was already in existence, but no Jews yet resided in the heart of the ancient city itself.Speaking with Peres, Rabbi Levinger raised the subject of the Avraham Avinu synagogue, which was built in 1540 in Hebron’s Jewish Quarter but had stood empty after the 1929 Arab massacre of Hebron’s Jews. When Jordan seized control over the area in 1948, they turned the site of the synagogue into a goat and donkey pen.According to Arnon’s account, when Rabbi Levinger began to explain the sanctity of the site and its importance, Peres cut him off and said, “Do you think I am a goy and that I don’t know what a synagogue is?” Shortly thereafter, Peres granted permission to rehabilitate and refurbish the synagogue, thereby laying the groundwork for the ultimate reestablishment of Hebron’s Jewish community.“Not that there weren’t further struggles over the matter,” Arnon recalled, “but the greatest and most important breakthrough was the meeting with Peres.”Nevertheless, in March 2007, while serving as deputy prime minister, Peres described the presence of Jews in Hebron as an “unbearable situation.”So what is a right-winger to make of all this? Like many of my ideological compatriots, over the past two decades I was adamantly opposed to Peres’ policies vis-à-vis the Palestinians, and especially his embrace of PLO terrorist chieftain Yasser Arafat and his willingness to cede parts of the Land of Israel to our foes.I believed then, as I do now, that the Oslo process was the single greatest strategic disaster in the modern State of Israel’s history, and that its ramifications continue to cast a deep shadow over the country.But I also believe there is no denying that Peres was a man who dedicated himself to the State of Israel, and that now is not the time to engage in political diatribes or denunciations.Simply put, Peres is one of the most fascinating figures in the annals of the country, a man who took part in the uphill struggle to carve out and secure a sovereign Jewish entity in the Middle East.His contributions to Israel’s defense, such as the development of the Jewish state’s nuclear program in the 1950s and 1960s, are indisputable, and have made us all safer.Whatever one may have thought of the man and his policies, Peres’s death is a time to focus on his role in some of the country’s greatest triumphs, rather than to harp on his part in some of its grandest disasters.Human beings are complex creatures, full of incongruities, and Peres was no exception.So while I disagreed with his vision over the past 25 years, and believe it to have been decidedly misguided, the Shimon Peres I prefer to remember in light of his death is the one who demonstrated just how much one person can accomplish over the course of a lifetime.There will be plenty of time and opportunities for future historians and analysts to assess the totality of the individual, his accomplishments and failings.But for now, let us recall with admiration Israel’s “greatest generation,” and the man who embodied its challenges and contradictions, in all their vigor and robustness.