Fundamentally Freund: Is Israel missing out on mass aliya from France?

While aliya from France has in fact jumped in recent years, it remains well below its true potential. 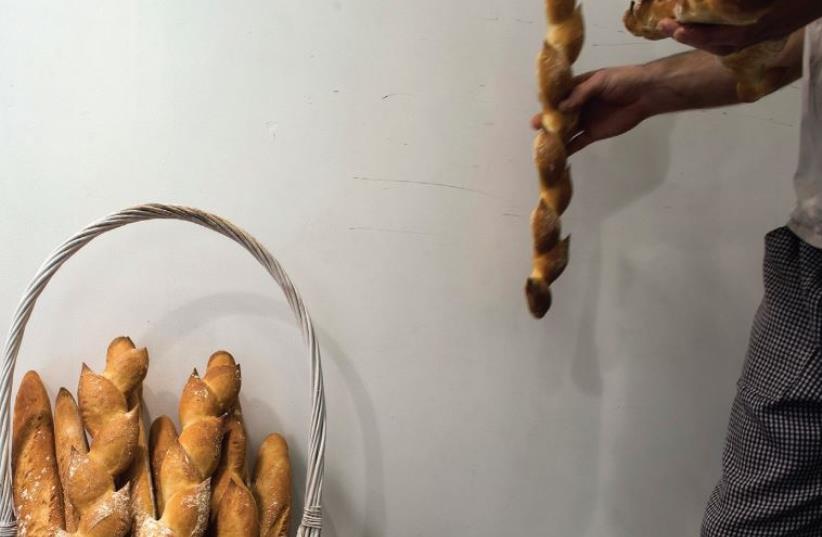 A MAN removes a baguette from a basket at a patisserie in Netanya. Many French Jews have expressed dismay over finding work in Israel and are immigrating elsewhere.
(photo credit: REUTERS)
Advertisement
You can hear it on the streets of Ashdod, Ra’anana, Jerusalem and elsewhere, in hushed conversations on the sidewalk and occasionally in louder tones, especially after a good bottle of Pinot Noir or Chardonnay has come out during a meal.The silky melody of the French language, it seems, is everywhere, a sure sign – albeit an anecdotal one – that the Jews of France are on the move, with large numbers choosing to make Israel their new home.Or are they? While aliya from France has in fact jumped in recent years, it remains well below its true potential.And the sad fact is that while the leadership of French Jewry is busy debating whether it is safe to don a kippa in public, Israel is missing out on a grand opportunity to entice ever-greater numbers of French Jews to come home to Zion.Statistics indicate that many Jews are feeling unsure about their future in the Fifth Republic. Indeed, polls taken over the past year in the wake of the various terrorist attacks in Paris have found that nearly 75 percent of French Jews are considering emigration, with many citing fears about rising anti-Semitism as a major factor.Not surprisingly, the number of French Jews moving to Israel has soared, climbing from 1,916 immigrants in 2011 to 3,263 in 2013. In 2014, 7,200 French Jews migrated to Israel, and the number grew to 7,900 in 2015.That means that approximately 20,000 French Jews have made aliya in just the past five years, which is a remarkable development.But these numbers, which various public figures have touted widely in recent weeks, only tell part of the story.Consider the following. After the January 2015 attacks in Paris against the Charlie Hebdo magazine and the Hyper Cacher kosher market, Israeli officials spoke confidently of an inevitable surge in aliya, with some predictions asserting that between 10,000 to 15,000 French Jews would move to Israel in 2015. But that surge did not materialize.Instead, the aliya from France grew by a modest 10% last year, far less than many had hoped.In addition, there are thousands of French Jews who have uprooted themselves and their families but instead of making aliya, have chosen instead to move to places such as Miami, Montreal and London. Local media outlets in Florida and Quebec are rife with reports about French Jews moving to these areas.Whether we like it or not, Israel is one of several options open to French Jews, and we need to make the Jewish state more competitive in what it can offer new immigrants.This is particularly important in light of the ongoing atmosphere prevailing in France. The coordinated Islamist terrorist attacks that struck Paris in November, which killed 130 people and captured the attention of the world, are likely to accelerate the timetable for many French Jews.And if in fact three-quarters of France’s estimated 500,000 Jews are considering the possibility, that represents some 375,000 people, many of whom might very well decide to pack their bags.Hence, Israel is facing a historic opportunity to bring home a large portion of French Jewry.But as is often the case, red tape is keeping many people away. For years, French aliya activists have bemoaned various bureaucratic barriers which, for example, make it difficult for French immigrants to get their academic degrees or medical licenses recognized in Israel.As a result, many French Jewish professionals, such as lawyers, doctors and educators, who might otherwise make aliya decide to go elsewhere, such as Quebec, where they do not encounter such difficulties.According to some reports, it is easier in some cases for a doctor who is in Israel on a tourist visa to obtain permission to perform surgery than if he has officially made aliya.Last year, Dr. Dov Maimon, a leading expert on French Jewry at the Jewish People Policy Institute, presented a plan to the Israeli government to absorb 120,000 French Jews, but warned that the country has thus far failed to make the requisite changes in order to entice French Jews to choose Israel over other destinations.Fortunately things are starting to change, as officials such as Absorption Minister Ze’ev Elkin, Likud MK Avraham Neguise, who chairs the Knesset Aliya and Absorption Committee, and Likud MK Nurit Koren, who heads the Knesset lobby for French aliya, are working assiduously to address these problems.But much more needs to be done than merely tinkering with some bureaucratic obstacles to make Israel more attractive to French Jews. Steps such as offering increased tax incentives, enhanced job training and Hebrew enrichment classes, as well as other economic inducements, are critical to drawing more French Jews to living in the Jewish state.Major steps need to be taken, and quickly, to ensure that the absorption process for French Jews is as streamlined, efficient and comprehensive as possible.The Hebrew word for France, “Tsarfat,” is mentioned three times in the Bible, most famously at the end of the Book of Obadiah, where the prophet says that the Jews who were exiled there will one day return to settle the Land of Israel.The Jewish state now has a chance to fulfill this historic and Zionist mission and to bring French Jewry home. We must not allow the opportunity to slip away.