Fundamentally Freund: Stop the Palestinian desecration of the Mount of Olives

Not content with trying to snuff out the lives of innocent Jews, Palestinian vandals have been systematically and with impunity smashing tombstones. 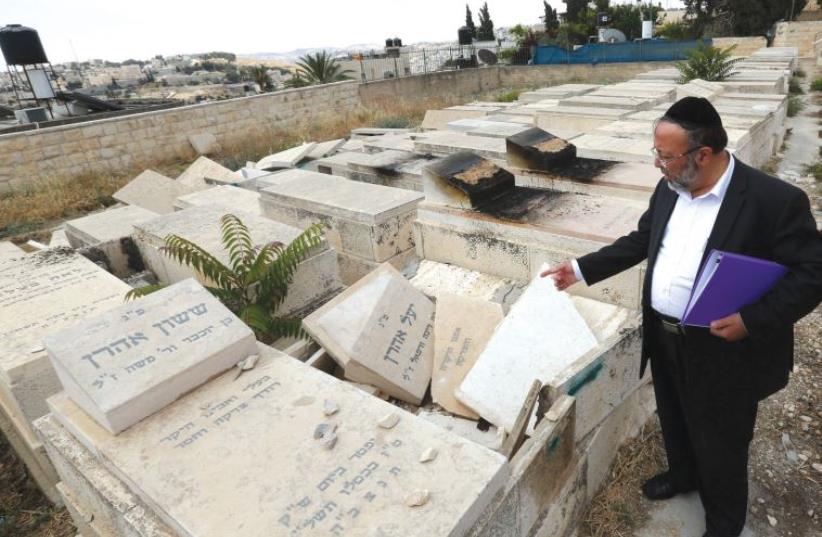 The caretaker of the Afghan section of the Mount of Olives Cemetery points out the vandalism.
(photo credit: MARC ISRAEL SELLEM/THE JERUSALEM POST)
Advertisement
Amid the recent surge in Palestinian terrorist attacks against Israelis, our ostensible peace partners have also launched an unprecedented assault against the oldest and most prominent Jewish cemetery in the world: the Mount of Olives in Jerusalem. Not content with trying to snuff out the lives of innocent Jews, Palestinian vandals have been systematically and with impunity smashing tombstones, setting fires and desecrating graves.Though the phenomenon itself is not new, the pace of destruction has been gaining pace in recent weeks, and Israel must act to protect this ancient and hallowed ground.Located in the heart of the capital, the Mount of Olives has been used since at least the First Temple period, more than 2,500 years ago, as a place for Jewish burial. That’s right: thousands of years before Islam was founded or Palestinian nationalism was invented, Jews were living in Jerusalem and burying their dead on the Mount of Olives, a tangible sign that our presence in this land predates that of our critics or foes.
See the latest opinion pieces on our page
If you haven’t strolled through its vast and varied sections, you might be surprised to learn of the wide range of prominent figures whose final resting places are located there. Rabbinic giants such as the Ramban (Nahmanides), from the 13th century, Rabbi Ovadiah Mibartenura, the 15th-century commentator on the Mishna, and the famed 18th-century biblical exegete the Ohr Hachayim Hakadosh, Rabbi Chaim ben Attar, are all buried at the site, as are Rabbi Yehudah Alkalay, one of the founding fathers of religious Zionism, and Rabbi Abraham Isaac Kook, the first Ashkenazi chief rabbi of the Land of Israel.But it is not only prominent rabbis who were interred on the Mount of Olives. Eliezer ben-Yehuda, the founder of modern Hebrew, was buried there, as was Nobel Prize winning author S. Y. Agnon, poet Uri Zvi Greenberg, former prime minister Menachem Begin and the legendary Henrietta Szold, who established Hadassah, the Women’s Zionist Organization of America.A host of other rabbinical luminaries, leading cultural and historical lights and Zionist figures were laid to rest in the burial grounds, as was my relative, Rabbi Shmuel Salant, who served as Ashkenazi chief rabbi of Jerusalem for almost 70 years until he passed away in 1909.In any other country, such a site would be treated with the proper veneration and respect, and any attempt, concerted or otherwise, to desecrate it would be harshly punished.Nonetheless, here in Israel and across the Jewish world, the systematic Palestinian assaults on the Mount of Olives have largely been under-reported, and too little has been done to find and punish the perpetrators.In just the last two weeks of June some 90 Jewish graves were said to have been vandalized by Palestinians. Chilling photographs online show tombs pried open, headstones shattered and graves singed by flames. Nonetheless, not a single perpetrator – not one! – has been arrested or brought to justice, nor has the mainstream Israeli or foreign media shown much interest in covering the story.“If anything like this happened to a Jewish cemetery elsewhere in the world, in Poland, Rome, or Paris, that would make headlines,” noted Jerusalem City Council member Aryeh King, “but here it has become something regular, usual.”King, who lives in an adjacent Jewish neighborhood, said that the current wave of attacks on Jewish graves is “one of the worst that I’ve seen on this cemetery” in nearly 20 years.Likewise, Jerusalem’s Ashkenazi chief rabbi, Aryeh Stern, lamented the fact that as far as the media is concerned, “When the Arabs defile the graves on the Mount of Olives, that’s not news.”It is time for this to change. Israel cannot and must not allow Palestinians to continue to desecrate this national and historically important site. It is clear that the police and security forces are not doing enough to protect the area or hunt down those who defile it.There are reports that in the wake of the recent round of attacks on the Mount of Olives, security measures are being beefed up and more funds will be allocated to safeguarding the site. But just throwing money at the problem will not make it go away.A larger, permanent police presence in the area is necessary, as are more security cameras and video feeds, and more must be done to identify, locate and prosecute those Palestinians who are wreaking havoc on Jewish graves.In general, greater efforts should be made to encourage Israelis to visit the Mount of Olives, which is a link to our ancient past, given the wide assortment of notable Jewish figures who are buried there. You can learn more about the site at: http://www.mountofolives.co.il/eng/.With all due respect to Westminster Abbey and Windsor Castle in England, Les Invalides and the Pantheon in Paris, and America’s Arlington National Cemetery in Virginia, the Mount of Olives is simply unmatched as a burial ground in terms of longevity, location and significance.From 1949 to 1967, when eastern Jerusalem was under Arab occupation, the site suffered indescribable damage at the hand of the Jordanian Legion.But now that Israel is once again sovereign over all of Jerusalem, how can we stand by silently and watch as this national treasure is being defiled, despoiled and desecrated on a daily basis? Let’s restore some dignity to the Mount of Olives and, by doing so, to ourselves as well.

Tags mount of olives
Advertisement
Subscribe for our daily newsletter