Amid internal threats, Hamas may seek escalation with Israel

While Hamas prepares for its next aggression, the people of Gaza are running out of hope. 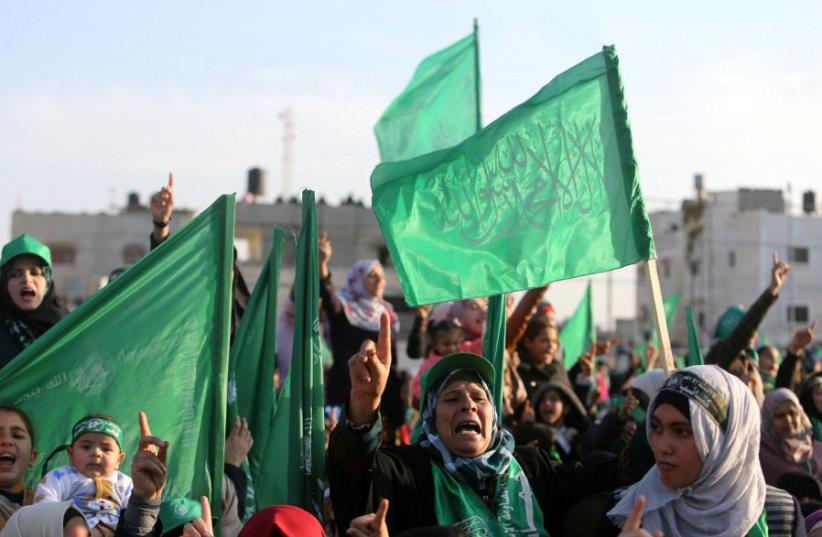 Palestinians take part in a rally marking the 29th anniversary of the founding of the Hamas movement, in Rafah in the southern Gaza Strip December 16, 2016
(photo credit: REUTERS)
Advertisement
Hamas and Israel both talk about not wanting another war, but are preparing for one. Since the 2014 Operation Protective Edge, the Gaza Strip has remained mostly quiet, with only a few intermittent rocket attacks such as last week’s, which actually seems to have been carried out by a Hamas-linked Islamic State affiliate in Sinai that spends most of its terrorist effort on ambushing Egyptian soldiers. But this is only another misleading calm before another explosive storm.Since 2014, Hamas has been working furiously to rebuild its military capability, digging and repairing attack tunnels and replacing most of the 4,000 rockets it fired at Israeli civilian targets over the years. Recent missile launches and sniper fire at IDF units along the border seem to indicate a round of testing Israel’s patience that precedes another Gazan provocation that leads inevitably to war.The defense establishment, still smarting from leaks of the State Comptroller’s Report on Operation Protective Edge, has also been working to apply the lessons of that war. Anti-tunnel technology has been put in place although still not perfect and Ground Forces units have stepped up training, just as Defense Minister Avigdor Liberman has declared a get-tougher policy of retaliation for attacks.
Hamas propaganda video
Just last Monday, the IDF targeted several Hamas military positions with air strikes and artillery after a single rocket hit southern Israel and later in response to gunfire targeting Israeli troops working on the border fence.The missile, whose launch was claimed by a small jihadist group, caused no damage or injuries when it hit in a field near Ashkelon. More recently, however, Islamic State claimed responsibility for the firing of four Grad missiles from Sinai at Eilat on Thursday. Three of those rockets were destroyed by Iron Dome missile interceptors.Sinisterly, however, the remains of the fourth missile were found at the bottom of a hotel swimming pool.In the next war, Hamas aims to inflict painful strategic blows on Israel with short- and long-range missiles, by kidnapping and killing Israeli civilians and soldiers via attack tunnels, by introducing the use of weaponized drones, by infiltrating Israel with naval commandos and even through cyber warfare against the IDF.Yoram Schweitzer, head of the Program on Terrorism and Low Intensity Conflict at the Institute for National Security Studies in Tel Aviv, told The Jerusalem Post that if the group does decide to use weaponized drones, “Hamas knows that if they use this, the retaliation will be very deadly, it will be an act of war.”The growing frustrations and anger of Gaza residents is a ticking time bomb that the terrorist Hamas regime has been incapable of defusing. Fearing the internal threat to its rule, Hamas may very well instigate a serious military escalation in an attempt to deflect that anger toward Israel.Liberman has upgraded the former tit-for-tat retaliation for each rocket fired from Gaza, seeking a new level of deterrence, as exemplified by the IDF recently striking 50 Hamas targets instead of the normal two to five per rocket attack. These were pinpoint strikes designed to be cautionary, rather than lethal, in order to limit the chances of uncontrolled escalation as occurred in 2014 – no one was killed in the 50 targets destroyed.While Hamas prepares for its next aggression, the people of Gaza are running out of hope. Youth unemployment in the Strip is above 60% and more than 100,000 university graduates currently have no chance at a better life. The water situation is not getting better and Gazans enjoy electricity for sometimes just six hours a day.Hamas is to blame for this. It is a terrorist organization that ruthlessly rules Gaza in a way aimed at making the lives of its people as bad as possible. It does this intentionally, to make it seem as if it is Israel’s fault.Despite this, there is talk in Israel of offering Gaza more economic benefits such as allowing more Palestinians to enter Israel for work and increasing the Strip’s foreign imports and exports. The artificial island often spoke about off Gaza’s shore is one idea that could help move the situation forward.The chances of this happening with continued rocket attacks is low, and as long as Hamas remains bent on Israel’s annihilation, it will be difficult to carry out these measures. The people of Gaza have an opportunity. They need to stand up to their ruthless leaders and pave the way for a better future.